Here is Part I to this series. Let me illustrate the subtitle. Timeframe, context and a lot of other factors go into getting some clue about what the future might hold, and predicting it is a low-probability endeavor; meaning, it’s a high-payoff play for those lucky enough to get it right or a huge loss for those who get it wrong. 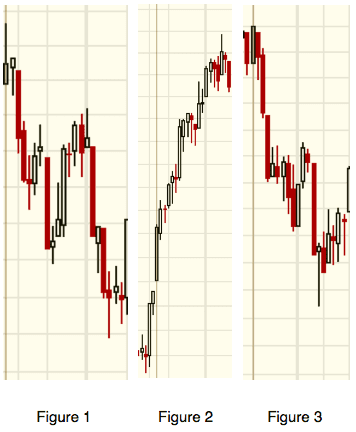 So, you have: "Oh, Shit!" "Hallelujah!" and, "No, Oh Shit!." I could go on and on with this, and it all depends on scale…so not to belabor the point from an ex options-trader, let’s cut to the chase. Click to open the BIG version. 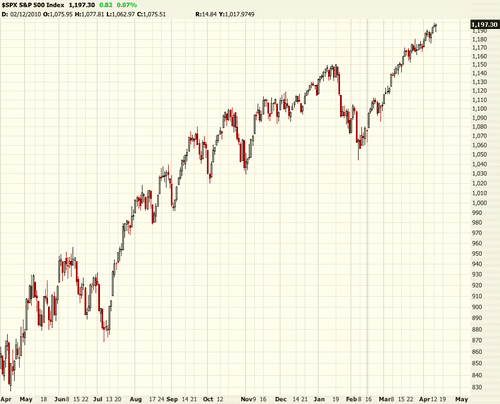 I’m not going to get into the dynamics of why it’s not even close to linear, the shorter the timeframe you examine (these are all daily bars, called "candles" in trader speak). In my trading platform, I can get down to tics or candles by a few seconds interval, and it’s all over the map on a minute, hourly or daily basis. The level of potential foolishness is unmatched and it’s extremely attractive and addictive for risk takers. Suffice it to say that what you see above is the result of trading transactions between buyers and sellers, all of whom have no idea of what the future holds. in a sense, every last one of them is being fooled by randomness. There are exceptions, but those mainly involve traders holding stocks  or tangible assets who have a good idea of what they’re worth tangibly, taking advantage of fools undervaluing them or overvaluing them (you can play it either way). That’s the basic Warren Buffet, Value Investing, long term approach. I don’t think he ever shorts the market, but he looks for severely undervalued stocks in terms of assets, management and other crucial factors and when he finds them, he buys & holds. But there are others — Bears — who do just the opposite & sell short.

Before I move on to link this to health in the broadest sense — metabolism, digestion and body temperature in the narrow — let me just say that I’m very keen to this sort of dynamic. As a full-time trader for several years, I at times made lots, like 800%+ in six months, once. I’ve also have the educational privilege to have lost over $200K in the space of a couple of weeks. In short, I allowed myself to be fooled.

How did I do that? I’ll give you an analogy: I lost the forrest through the trees. Sure, I had some success with drilling down, i.e., looking at a single tree, discerning the forrest, and getting lucky. But it could not last. When I got into trouble, not only was I looking at a single tree, I was looking at the pattern of the bark on that tree, then the fibers, then any grubs & parasites. I’d have gone microscopic, but it was too late by then.

The point is that a whole lot of the "health" markers we hold dear, thanks to modern medical science, might be serving only to fool us. Just as bad, or worse, it makes us susceptible to opportunists — those who claim to have it all figured out. After all, they have nothing but a steep upward slope over some period of time (they won’t tell you about the intraday fluctuations, i.e., troubled emails from troubled adherents to The Strategy). I’ve seen it in trading, and I’ve see it here.

We now have folks getting their cholesterol measured regularly, they check their BP several times per day, weigh themselves every day or more, get D levels checked habitually…and then there’s the coronary calcium scores, the particle LipoProfiles, and on and on it goes. And, now, body temperature.

How is it we all seem to be attempting to falsify the "absurd" notion of eating only Real Food, paloesque? One guy calls it — paleo — a "restrictive diet," only a few breaths after admonishing you to stay away from fructose, omega-6 and other odds & ends. Like you need grains in your diet (you don’t, ever; it’s an inferior nutritional choice and that’s not even to get into the huge anti-nutrient load, ignored by the same guy).

Yes, I have been guilty of promoting some of this sensationalism myself by posting lipid profiles & such and posting about all of it. But you know what? The posts that really matter as to my path are: the food and the progress. The food is regular but fairly varied in composition and the progress discounts the randomness of the  +-4 pounds regularly gained & lost throughout this journey.

So the next and likely final post will be about what I think the real issue is in terms of metabolism and digestion. You can go ahead and pig out on High Everything and gain weight (body fat — it’s surely not lean, and that should be noted) in hopes it will "cure your metabolism," or, you can implement a few very effective strategies to ensure that you are getting every microgram of nutrition out of every gram that you eat, not gain any weight, and go forth.

I’ll finish with a laugh. You must know: I laugh at the idea of chasing body temp. It it truly absurd, and a crude, snake oil approach to health. See comments in the previous post for how 98.6 was arrived at. Fooled by randomness… Or, just the same: averages.

So then, what do I say about all those people who report to have bean raising their body temperatures? Well, other than a congratulations with a smirk, I’d say either 1) they were hypothyroid, probably pre-existing, so probably good, or, 2) they’re eating grains and other chronically inflammatory foods and body temperature is rising in response to systemic inflammation, just like it does in response to infection. It could be seen as a rather natural prophylactic measure.

The underlying theme of this post is inspired by the seminal insight of now EvFit enthusiast and friend of Art guy, Nassim Nicholas Taleb. Fooled by Randomness , a book that changed my life and set me on the path to better.