You know, I almost never have any clue what particular posts are going to explode in comments. It seems to be the general case, however, that those entries in which I invest the most time get less attention in comments than other posts I just toss up. Perhaps it’s length, or perhaps the ones I spend more time on have less loose ends that need to be explored in comments. At any rate, it can be interesting.

…Like last week’s "Paleo Fear of Potatoes" post, now at 152 comments and still going… Wow, what sacrilege I’m apparently guilty of. For some, it’s resistance to the idea that paleo lifestylers ought do anything but low or very low carb (evil insulinz, y’know) and any carbs you do get should come from non-starchy vegetables & fruit. For others, it’s more of a orthodox, even fundamentalist religious insistence that the concept of "paleo" not be sullied with any neolithic foods that may nonetheless be more-or-less "primal" or real food in nature. So, while various sweet potatoes are clearly "paleo," the poor ol’ white potato didn’t come on the scene until a few thousand years ago, missing its 10,000 year cutoff, and while reasonably comparable to sweet potatoes in terms of nutritional density, it’s neolithic, not paleo.

Actually, I don’t really have a problem with the distinction. I already consume a decent number of primal, real foods that are neolithic, not paleo: dairy (butter, cream, cheese, yogurt), minimally processed meats (bacon, sausages, ground beef), dark chocolate (rarely), supplements (a few), sparkling water, wine & other spirits and likely a few other odds & ends. So where does one draw the line? How many neolithic agents are you allowed before you’re looking at damnation, or, in my case, excommunication?

Apparently, Don Wiss, proprietor over at the fabulous Paleo resource center, paleodiet.com, thought enough was enough, I guess. See, I was one of the few blogs listed, along with Mark Sisson, Don Matesz, Stephan Guyenet. But not anymore. I have sinned the unpardonable sin.

Well said James. Because of this thread I removed my link to FreeTheAnimal. […]

The way you and I define paleo is what could be called orthodox. I don’t want to see the term diluted.

OK, I don’t begrudge anyone the links they choose to have or not have on their sites. I’m happy to have been included in the first place and it was appropriate. At around 200,000 real people (not bots, as so many like to report) page views and 35-40% of visits being first timers, I’m…well…doing my job. At the end of the day, it’s about the real results. So, upon due consideration I responded to Don’s comment thusly.

“Because of this thread I removed my link to FreeTheAnimal.”

Oh, my. Guess I’ve been excommunicated, then. That’s fine, Don. Actually, it was because of this that I discovered my oversight of not having your reference pages in my blogroll, an oversight I intend to correct, since the real results of my readers is infinitely more important than orthodoxy. I wouldn’t want newbees to miss out on good information on account of disagreements that at best, constitute only 10% of entire dietary makeup.

Don’t know how much of a cop you want to be in all this, but I think I’m in pretty good company with others listed on your pages.

“I eat a lot of potatoes. I agree with commenter Aaron in the last post, they seem like a ‘clean’ fuel. Rapidly absorbed, low anti-nutrients, some fiber but not excessive, plenty of vitamin C. Plus the protein quality is quite high, so you don’t have to complement it with other protein sources to make good use of it. It also contains a surprising amount of protein (roughly 10% of calories). I also like that they’re cheap and totally unprocessed.”

“I think any potato fits the picture, but I prefer sweet potatoes.”

“On the other hand, I know from experience that people can lose fat while eating 100-200 g carbs daily and including bananas and sweet or white potatoes. I consider them primal foods since they appear in H-G diets.”

And by the way, I am not “encouraging” anything, but I do discourage potatoes for those trying to lose significant weight still, diabetics, or those who feel bad eating them.

Jeez, and I didn’t even get mean with him… Glad I didn’t or I might be a bit…crispy by now.

I don’t know… I rather hate seeing this all turn from the increasing international popularity we’re currently enjoying into a Shiite / Hezbollah hysteria over doctranary authority & dogmatism.

So what do you think? At what point ought not someone refer to themselves as "paleo?"

To recap, according to some: 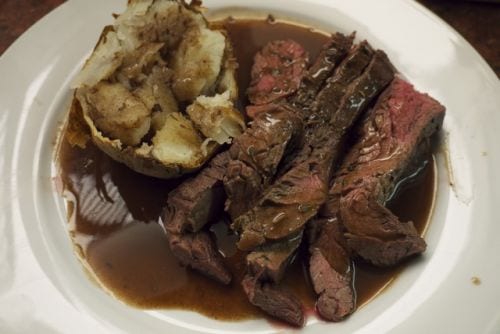 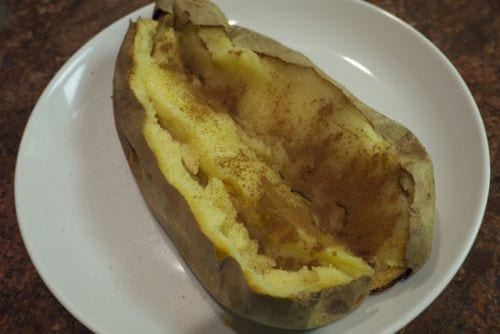 I must finish by noting that last night was my first ever baked sweet potato. In the oven, 400 for an hour. I was pretty amazed. I’ve used them in cooking, before, mostly in stews & such. I’ve also done mashed orange sweet potato, or yams or whatever you call them. Both my wife and I couldn’t get enough of this, and it really didn’t even require the cinnamon (or anything else). It was like a sweet pie filling. So, thanks to some commenters on that last potato entry; the sweets will definitely be figuring more prominently in the future.