Truth be told, my absolute favorite tartare concoction is wonderfully lean, red, fresh & chilled ahi tuna. A good tartare must be very lean. Instead of using fat for flavor, you’re using spice. I can’t recall exactly, but I don’t believe I’ve actually done steak (filet) since I lived in France.

But tonight I did, and it was inspired by this post by my friend Michael Miles at Nutrition and Physical Regeneration.

I used the traditional French method as outlined in the video (try not to laugh with how he pronounces French words, especially cornichon). Quality dijon mustard, cornichon pickles, capers, shallot, egg yolk, a drizzle of EVOO and salt & pepper. Click for the high res. I did this one with flash in order to make sure to get the texture. 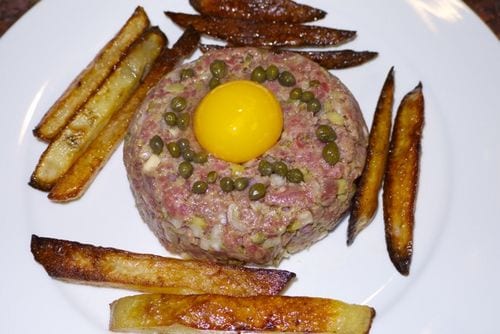 Here’s a few clues to doing it right.

So there you have it. The chips are one potato, split between the wife & I. I got them started in the cast iron for only a couple of minutes, with a combo of coconut oil and tallow. Then onto a baking sheet at 350 for about 30, turning them at about the 20m point.

Well, Bea had never had steak tartare (tuna, yes) so to be on the safe side, I cooked her a grassfed burger shrouded in New Zealand grassfed sharp cheddar. 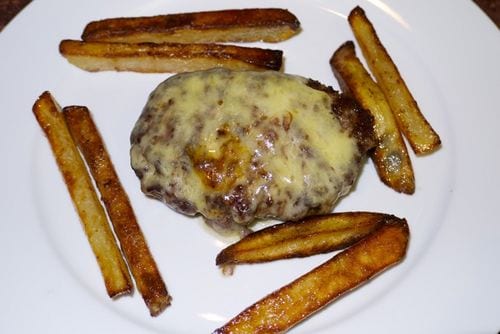 But bless her heart, she tried two bites, loved it, and is ready for round two. We’ve come a long way from the days when I met her and she ordered her meat medium well.