Thanks Readers. So Here’s Another Food Pic

Here’s a heartfelt thanks for those who seem to continue to find value in this blog such that they tell others, and that’s what it’s really all about. Readers come and they go all the time and that’s understandable. They either come to realize that they’re ready to move on and just live paleo, or they find a blogger more to their liking, many of whom I’ve likely promoted here and which I’ll continue to do.

The most common thing I see from those who email me now and then — often to send me a link for posting ideas, which I hugely appreciate even though I have to pick & choose because I can’t blog every relevant thing out there — is that they tell everybody they can about the blog. Believe me: that’s the most valuable thing you can do to help grow this thing. Helping to grow it simply brings more opportunities to spread the word. Feet on the ground. Steady. Consistent.

Had it not been for your efforts along these lines, no Der Spiegel article, no MacLean’s, no Rob Breakenrige interview. Yea, I’d have probably still done the DRW article because that came from the BoingBoing link on no soap & no poo that really got things going on December 31st, and which carried over into January and raised the blog’s basal metabolism significantly. Things like that can be fabulous, acute stimuli, but what really builds something like this long term is readers who, before they move on to something else, introduce two, three or even more new readers who likewise reproduce. 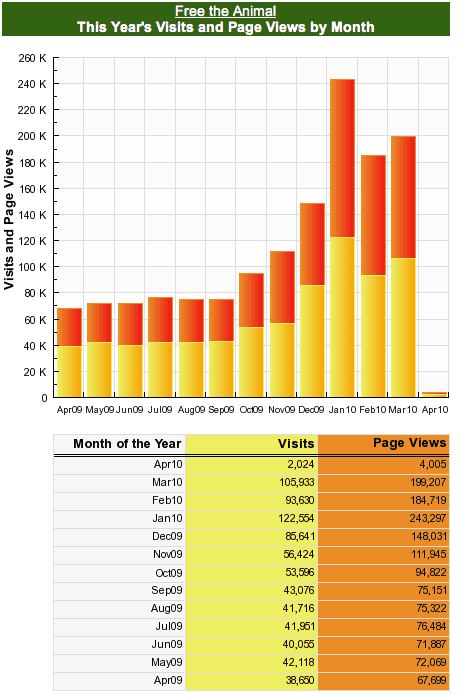 So thanks folks. And also, thanks for the steady donations that come in and those using the Amazon portal more and more. Hey: to whomever bought an Apple AirPort Extreme for around $200 and a nice commission to FTA, big salute! Anyone need a 65" Plasma flat screen. 🙂

OK, it’s not much but here’s a small token for today. 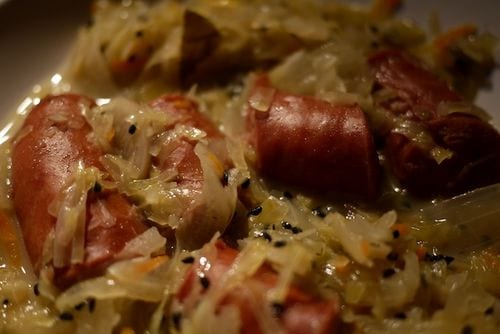 The sausage is grassfed beef from La Cense and the sauerkraut is fresh, from the Campbell Farmer’s Market. This one is done with jalapeno peppers and was hugely spicy. To tone it down I added some beef stock & heavy cream and cooked it a while. Also, the black caraway seeds are my addition as well.