The KFC “Double Down” is Going Down!

So I was intrigued a couple of weeks ago when I read Fat-Head’s…uh…Tom Naughton’s account of getting his final affairs in order in advance of trying out Kentucky Fried Chicken’s New Double Down Sandwich. "I Doubled Down and Lived to Tell."

After learning a few weeks ago that KFC would begin offering the Double Down nationwide on April 12, I made plans to try one. But first, given the hysterical health warnings prompted by KFC’s announcement, I put my affairs in order: I made sure my life insurance was paid up and placed a copy of the policy on my desk. I had an attorney update my will. I called my mom to tell her she was a great mother. I also tucked away a note for my wife, telling her I’d understand if she remarried after a reasonable grieving period — say, 25 years.

Now of course, Tom is more of a low-carber than a paleo guy; though, if you saw Fat Head the Movie, which you must, you understand that his low-carbishness is well informed by his sense of evolutionary human biology; i.e., the natural diet humans evolved on. See, unlike the vast majority of the medical, agricultural, "health," and dietitian communities, Tom doesn’t think "Mother nature is stupid," naturally selecting humans with a propensity to eat real foodstuffs that cause their bodies to "want to kill them."

And moreover, Tom is very sympathetic to a paleo guided lifestyle as I practice, even though — as virtually all other people on Earth — I don’t limit myself exclusively to paleo foods. Tom’s particular approach is to focus his energies on the obviously stupid and evil, not wasting his time in attempts to replace conventional dietary dogmatism and fanaticism with another one that starts with ‘P’. Here, Tom just took up my "Potato Controversy" for himself. And he even learned something. Sweet potatoes don’t make his glucometer explode.

…So anyway, at least in the photos, that sandwich looked rather enticing to me so I went and had myself one, with iced tea, no chips or other side dish. And, I had the grilled version but went ahead and let them put on their doubtless HFCS, 50-franken-ingredient filled "sauce." After all, it wasn’t more than a light spread of the stuff. And, the sandwich was OK. The breaded & deep fried one probably would have made me feel bloated, tired, congested and generally like crap for hours. The grilled one made me feel fed, energized, satisfied.

But I went ahead and outdid them yesterday, in a big way. I stumbled upon the idea a few days ago. As I’ve blogged about previously, I am undergoing a self experiment with professional, paleo sympathetic guidance. While I can’t reveal specific macronutrient ratios, which vary in any case depending upon a number of factors, suffice to say that I have to actually track my intake and as you might guess, I often find myself butting up against the limitations on fat. And so, I cook up packages of skinless chicken breast tenders. I was looking for a way to make them a little tastier. Of course, mustard is always an option but it suddenly struck me: French style cornichon pickles. I just eat them right together. Truly delicious; a great way to rescue a relatively dry piece of lean meat. You know, back when I lived in France I always loved a good sandwich jambon beurre. It’s a truly simple delight: a crunchy baguette liberally spread with sweet butter and thin slices of jambon, a French style of cured ham. I completely forget where I learned of the variation but one of them is to add in those cornichon pickles and so having a butcher, baker and a market within walking distance of my Mediterranean flat, it was a popular thing for me to eat. Looks like it is for at least 28 other people, members of this Facebook group: Pour la sauvegarde du cornichon dans le sandwich jambon-beurre. Basically: Save the pickle in the sandwich!

Well I can tell you that they are also awesome on my version of the Double Down Sandwich (click for hi-res). 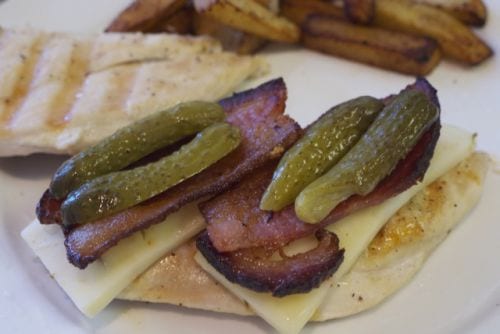 A Better Double Down Sandwich

This was one large chicken breast, butterflied & grilled, pepper jack cheese, thick sliced butcher counter bacon, and the cornichons. No need for a sauce as the cheese is plenty.

There in the background is a half of one of those evil white potatoes sliced chip style and fried in tallow and coconut oil.