My trips to farmers markets are usually about protein & fat. I rarely know what I want to accompany a dish with, and more often than not I’m content with a salad. I’ve no beef — ha ha — with the "mostly plants" folks, but this is one corner of the paleosphere where we unapologetically celebrate a "mostly meat" eatstyle, with a middle finger raised high if necessary.

Unlike so, so many out there, we don’t give a shit about being perceived as "balanced" or "moderate" — besides which that usually means "mostly plants, whereas "mostly meat" is unbalanced, immoderate, unsustainable. But most of all, we just care about being healthier and far higher nourished than the "mostly plant" dupes.

So in addition to the three fresh oysters on the half shell I consumed on site, here was today’s haul. 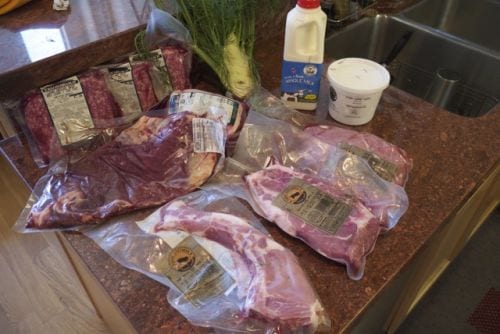 The fennel bulb is explicitly to flavor a crock pot roast (truly amazing). Then there’s…

What you see above was about $115 total. And, I’ll actually consume every last bit of it. This is another problem I have with vegetables and fruits. I waste a LOT. I just don’t feel like eating them, so I don’t and before too long there’s no choice but to dump it. Another reason why potatoes are a good option. And they’re good nutrition and a quality source of protein.

One thing to note about Prather Ranch, listed above. While certified organic, it’s not 100% grass finished.

For all organic feed production, no synthetic herbicide and pesticides have been applied to feed crops for a minimum of three years. The animals spend the majority of their lives grazing on organic forage in irrigated pastures or on grazing land. The organic cattle are finished on a diet of chopped forage, with some organic barley and organic rice.

But only a few minutes reading about their history and practices ought to be enough to convince anyone that this is a super-quality operation. Practices that stand out to me are that they have their own abattoir and only their own cattle are processed there, they transport only in their own vehicles, and they have not introduced any cattle from outside their own herds since 1995.

But here, take a look at this flank steak from Knee Deep up in Oregon. The guy at the Prather booth highly recommended it to me as a grilling steak. I’ll find out on Monday. 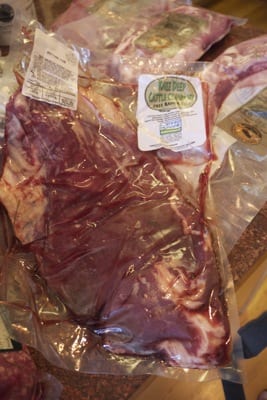 And here’s an interesting cut that they call the "caveman" cut. 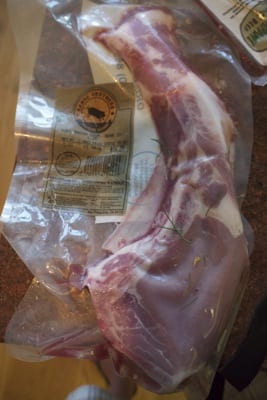 Part pork chop, part bacon, with the bone to form the shape of a club. It’s perfect. That’s going in the sous vide.

Here’s what I’d like to see from all you vendors out there, and pastured eggs guys as well (no retail place or farmers market to get pastured eggs here in the south Bay Area that I’m aware of). Try to get into more farmers markets, more of you. How many dammed fruit and veggie stands selling the same things does a farmers market need. Jesus, already; it’s like a goddammed mall and women’s shoe stores.