(with honorable mention to Rogan Kirsch)

If you didn’t get a chance to catch Penn & Teller’s Bullshit! episode on Fast Food, it was pretty good. Very, very Fat Head–esque, which is essentially to skewer the notion that fast food is responsible for obesity by means of an “evil” industry preying upon a “stupid” public.

While I’m not a cheerleader for fast food, I do hold a couple of positions on it — aside from the obvious one that it’s none of anyone’s fucking business what others choose to eat or how much of it.

In Fat Head, Tom Naughton interviews Eric Oliver, author of Fat Politics: The Real Story behind America’s Obesity Epidemic and who, as I recall, made a good case that pretty much the whole of the average weight gain of Americans can be accounted for by the massive increase in the consumption of sugar drinks (including fruit juice) over the past decades. Basically, you’re talking about high caloric density in something that’s nutritionally vapid while offering nothing in terms of satiation — and in fact is probably quite the opposite once the insulin over-spike has done its thing.

No, in my view the best reason to shun fast food is simply optimality in nutrition. But on the other hand let’s admit that one thing fast food has going for it is: meat. Very nearly all of their menu selections have decent protein content. So before we continue here’s a clip from the program.

And, yea, Rogan “nudge nudge” Kirsch is a busybody dipshit too. He wants more government regulations aimed at fast food, artificially raising prices in order to “nudge” consumers into behaving according to his values.

In another interesting segment Penn & Teller profiled some professor at, I believe, Cornell who studies food habits and perceptions in a laboratory made into a dining room, where they feed people in a restaurant setting. In one experiment they served a ~950 kcal taco salad from Taco Bell where the bowl is a giant crispy tortilla.

Now aside from the grain represented by the flour tortilla, that looks like pretty nutritious fare. But one group was actually told their salads were from Taco Bell. Asked various questions while eating them, the answers were uniformly negative; i.e., “heavy,” “not very healthy,” “bad for you,” etc. Perfect guit-laden responses, as aimed for by the likes of Roth & Kirsch. And when asked to guess the caloric content, every person guessed extremely and surprisingly close, 900-1000 calories. Then, another group was served the exact same salad but were told that it was from some fancy local restaurant with an upscale sounding name. Asked the very same questions, answers were uniformly positive: “light,” “healthy,” “nutritious,” “good for you” and so on. And the guesses on calories? 400-500.

Pretty enlightening. So let’s take a look at the actual nutrition in their taco salad offerings (click to enlarge).

While not my choice, it does have a decent amount of fat (about 50% of calories) and a good portion of that is coming from the meat, avocado and sour cream — all excellent sources — and very respectable level of protein. The carbs, while high-ish for a single meal, aren’t that bad, particularly if no sugar drink is consumed along with it. A person could eat two of these per day exclusively and likely lose weight at 1,800 kcals or less, 50% calories from fat, adequate protein, and moderate carbohydrate of 150g per day at most.

So what is that skinny bitch, Meme Roth, yammering on about? And Rogan Kirsch? What’s his problem (other than the appearance of just having had an enormous suppository inserted)?

The aim here isn’t to hold up fast food joints as beacons of healthy eating. They’re places where it’s possible to get adequate to good nutrition when one is sensible about their own choices. But: I’d wager that in terms of enormous portions and hidden calories that your local TGI’s, Chili’s, Applebee’s, and so forth in that market, are far worse. Well shit on a shingle…let’s look.

Just scan through the Taco Bell nutrition info in one tab, then do the same with Chili’s nutrition info (PDF) in another. See what I mean? Taco Bell has not one single menu item over 1,000 calories while Chili’s must have dozens of them. Taco Bell has a single item at 1,000 calories exactly, their “volcano nachos.” All four of Chili’s nacho selections exceed that and one of them comes in at 1,690. Let’s just take a look at Chili’s appetizer and dessert offerings; you know, the stuff they try to get you to oder before and after the enormously portioned main course (click to enlarge). 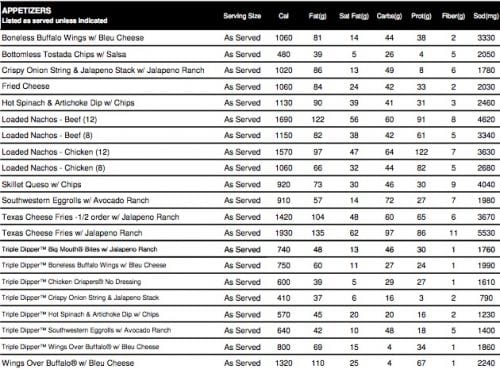 Now, if I did the math correctly, the 21 appetizer offerings come to an average caloric load of 1,010 per item. This is before you get your oversize portion of whatever. The desserts average out to 759. So let’s do a little math. We’ll start you off with a 16 oz sugar drink at 200 kcal, split the app for 505, dig into a median calorie oversize main course with 2 sides included at 1,300, and then finish it off splitting a dessert at 380. Total damage: 2,385.

That’s about 500 calories more than if you ate two of Taco Bell’s taco salads with the highest caloric load.

Now, tell me, who do these fast-food fascists think they’re fooling? …And did you catch Meme employ the inclusive “we” when referring to the “stupid” American public the “evil” fast food companies are exploiting?

You didn’t buy that, did you? Didn’t think so.

Update: Here’s an 8:25 minute YouTube clip of the show. Lots of good ‘ole f-bombs, skewering of assholes, magic and humor. Watch it while it lasts.