Let me just get this out of the way: Vibram Five Fingers shoes are…’Just OK’ for me. Sure, I loved them, at first, but I later realized that was mostly the novelty of it. It wore off and pretty quickly. I still suspect they’re destined for the fad dustbin.

See, I had long been into the mechanics of walking, having independently re-discovered and then trained myself how to walk — even in common athletic shoes (I have a pair of Nike SPARQs that I often walk in and workout in). So the Vibram 5Fs made perfect sense in that regard, but only at first, for me. Minimalist, safe, et cetera. So frankly, I have a few issues with them (I have two pair, as in my interview at birthdayshoes.com).

But I think that even if I were to sweep all of the foregoing aside I still wouldn’t be very bullish on them. On the other hand I do have them to thank for motivating me to the next step, which is simply to go barefoot. It was shortly after I received mine when one night — as I was donning them to take the dogs out for two blocks — that I just tossed them aside and went barefoot. I’ve been doing it ever since, without ever so much as a scrape. You naturally train yourself to lighten your step when you encounter something sharp. Now, I will say that this is over asphalt & pavement. I also walk barefoot in the dirt sometimes but that’s a far greater challenge — though I’m getting better at it.

In the meantime I’ve found what I consider the ideal shoe for walking, hiking, jogging and…as casual wear. I’ve now worn them to two functions with khaki trousers and they looked perfectly fine. Moreover, you feel as though you’re barefoot. I hate to abuse the word "literally" but it’s pretty damn close. I suppose you can literally feel a certain way (barefoot), while not literally being barefoot. See, one thing about the V5Fs is that I could never wait to get them [the hell] off my feet. Functional? Yes, especially in strenuous athletic activity such as sprinting or crossfit, but then I want my SPARQs the hell off too. I’ve never understood some folk’s desire to lounge around the house with them on; or are those just photo ops? But that’s the cool thing about this find. Hey, I can’t even stand to wear house shoes or slippers unless it’s really damn cold. The only time ever was when I had a pair of moccasins without any lining. Just bare leather. These are even better.

So let me present the RunAmoc from Soft Star Shoes. Click to enlarge. 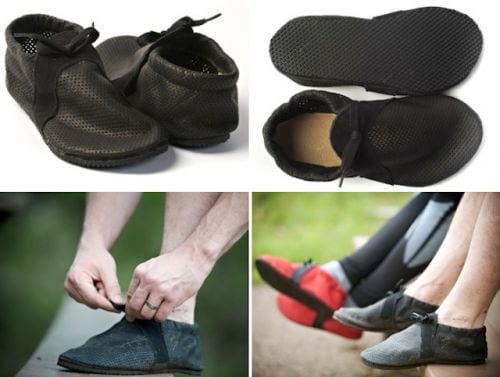 Pictured above is the one with the 5mm trail sole. I completely and without hesitation opted for the 2mm street sole. Here’s the difference. 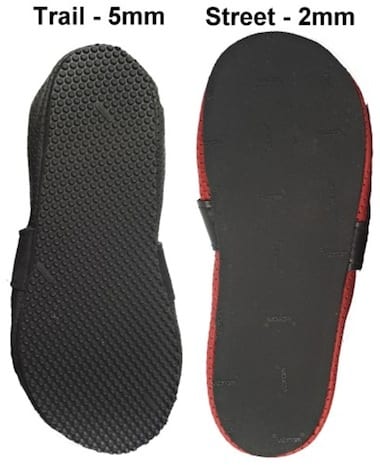 I’ve found the 2mm soles perfectly adequate, even for walking on dirt with pebbles. I would not even consider more than doubling the thickness. Oh, and by the way, guess who make the soles? Vibram does, and they make it out of that super hard & dense rubber that’s used in rock climbing shoes and such.

The other big, huge thing is the perforated leather. You get all the support you need without the sweat factory. And this is why I can even lounge around in them at home — though I’m typically barefoot anyway. It’s just that if I come in from an outing I find that I have no burning desire to get them the hell off my feet. You can truly feel the breeze from all the holes. Big plus, for me. I’m going to get another pair so that I have a set that stays pristine for going out. I feel perfectly confident wearing them in all but the most formal of settings.

I’m not to the point where I’ll be outright ditching my V5Fs and in fact I plan to take them along on my upcoming July excursion to MovNat in West Virginia. However, three days after I return from WV Beatrice & I are off to Monterosso al Mare in the Cinque Terre region of Italy for a week. I plan on taking my flip flops and my RunAmoks.