The day began for me at 4:15 am, Monday. I got up in plenty of time to ensure all was in order for a 6:15 flight out of San Jose. Arrived in Houston on time, had about 2 hrs of layover — enough to eat a pound of BBQ ribs & brisket (no sauce) and then they got us on to Charleston, West Virginia 20 minutes ahead of schedule. It was 5:00 pm local and the shuttle from Summersville Lake Retreat was due to pick us up by 7:00 for the nearly 2 hr drive to the MovNat encampment and training.

Unfortunately one of the attendees had a weather delay and so we ended up getting to camp at 10:30pm. Long day. And all was dark save for some Tiki torches; and nobody really delayed much getting off to bed in their individual tents with thick air mattress and bedding. Still; it took me quite a while to wind down and get off to sleep.

In the morning we were able to actually see where we were, and it’s quite lovely.

Before anything got going we had a nice breakfast with ample scrambled eggs, some bacon and a big salad with some nuts & seeds in it. And I learned something: try red palm oil on a salad. Amazing, and you really don’t need any lemon, vinegar or anything else.

Orientation and training begins, led by Erwan and his assistant, Victor, with lots of conditioning and training experience himself. 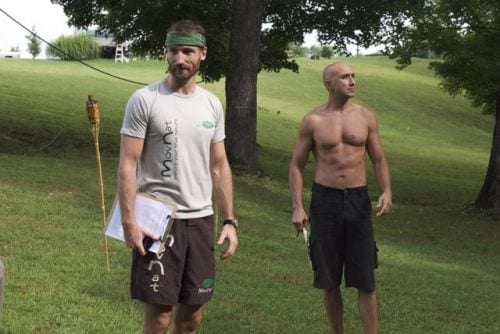 The training day began with an assessment where we were to each run through a surprising number of movements in order to judge our individual levels and to scale training to individual capabilities. While some movements have that scale built in — such as what size log are you going to hoist onto your shoulder & carry, or deadlift — and some require close supervision on the part of Erwan or Victor.

All in all it’s my impression that for a majority of the movements the field is quite level. Nobody in the group of 12 is holding anyone else back, and I find that impressive.

After the assessment we had an interesting session by Erwan on the importance of perception in the concrete context of natural movements. It’s quite simple, yet fundamental all at the same time. It was part lecture and part mild exercise for the purpose of teaching this awareness that in turn benefits the training.

I didn’t manage to get a photo of lunch, it was raw vegan, but quite good entailing a hearty salad with a nut butter dressing and finely chopped parsnip with curry, all drizzled with the red palm oil again (if I only knew).

Then we spend a long time training in many various moves and it was tough and fun. There is an intensity to it, at times, but it’s also something you’re training for skills, even to include proper breathing techniques. 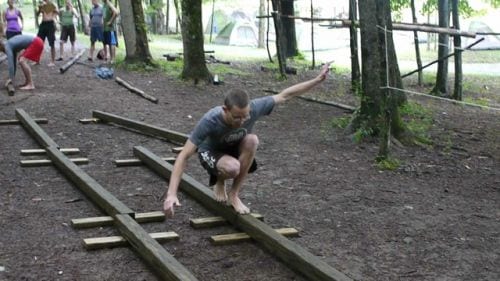 Squats on the Balance Beam

Most of us have been doing everything barefoot, including the running and jumps. No cuts, but I definitely have some sensitive areas on the bottom of the feet. I might give it a break tomorrow and don the Vibrams.

We also got drenched with monsoon like rain at least twice. But while sunshine would be preferable this added level of difficulty probably makes for better training. It also makes you questions your resolve, as in, what the hell am I doing flying all the way across the country to stand in the rain, torture my feet, and generally cause myself scrapes & bruises? 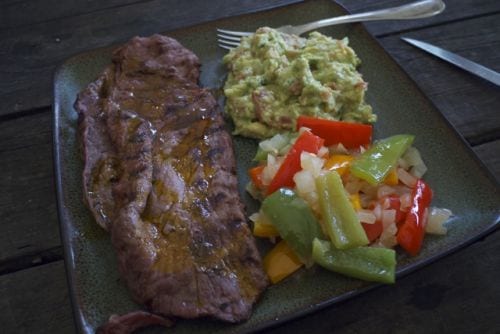 I’m not sure I have an answer for that yet, because finding the answer to that question is part of the process.