MovNat Day 2: This aint no picnic

It just keeps getting better & better or worse & worse, depending on your perspective. Those who are here, of course, know it’s getting better. They’re just having the quality and comprehensiveness of what they signed up for confirmed for them.

It’s truly remarkable, and different. Long days. No time wasted. But I’m walking dead right now and it’s coming up on 11pm. I’m sitting in Erwan’s car in the parking lot of a Burger King on WiFi getting this done.

One of the things that’s different about this is that you never know exactly when mealtime is, what sort of training you’re going to be doing, how long it’s going to last or when you’re done for the day. But on both days we’ve gone from morning (today, 30 minutes of primal & functional stretching exercises before breakfast) until late, after 7pm. 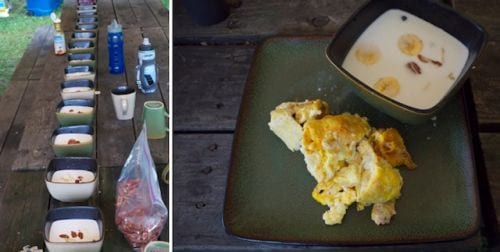 After that meal we did breathing exercises that takes the breathing one learns in a Yoga class to a functional level that’s used in all of Natural Movement. This included holding your breath. Now, in the assessment drills on day one I did a 2:10, beaten only by Barefoot Ted at around 2:30, I think. But today, after breakfast, not getting to sleep until 2am (rain, rain and more rain) and exhaustion, I could barely manage 1:30.

I was so tired but self defense training really breathed new life into me. I was particularly interested in this because I have never had any fight training. Interesting. Freeze, Flight, Fight, in that order. You train to fight for self-defense (but often by being very offensive & aggressive) so that you can have a very short freeze reaction and then take flight: get your ass out of there; that is, if you can’t do that right from the start. 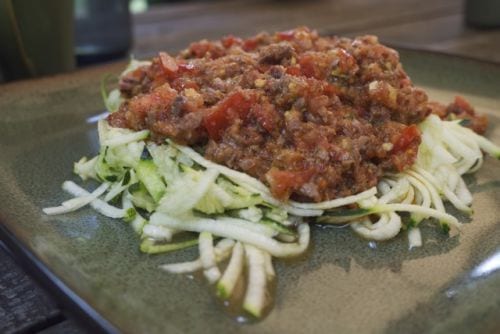 And ha, it wasn’t raw vegan this time. Since the one guy eating veg (for the last 7 months) caved to the beef last night — and Allie the camp chef had some leftovers — it when in the sauce (it was a cold dish, very yummy and would have been great even without the added meat.

Thank god we finally got a sunny day, and so after lunch it was off the the lake via a hike through the wilderness of 2.5 miles or so. Many obstacles along the way offered opportunities to practice new skills for just getting by in a jungle-like environment like a human animal.

The water training spot on Summersville lake is diving, as well as secluded. Most people would not brave the rugged trail to get there. 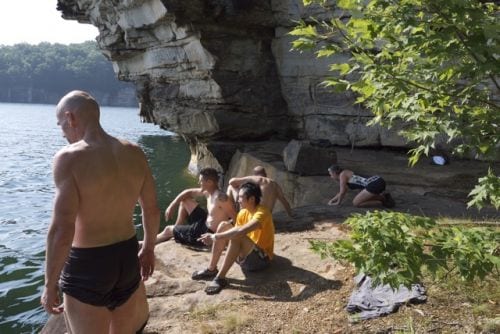 We spent a time hauling around a huge water logged-log, then did some drills with sticks and awareness I can’t describe, then did drills seeing how far we could dive down to get to the bottom. Many of us did 12-15 feet, but I think Barefoot Ted went the deepest at around 20 or so.

Finally it was a hike back and more training, this time first cleaning heavy logs (from one end), then cleaning and pressing them. And then after that, it was jumping from balance beam to balance beam, placing them farther apart with each success. Finally, we called it a day at 7:30 pm. 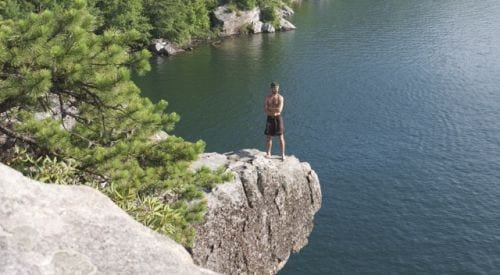 That’s a photo I took of Erwan earlier today to send to a magazine editor who’s doing a story on MovNat.

No photo of dinner as I was too busy eating and plus we were faked out with an earlier dinner. But we had enormous chicken breasts with a great fresh veggie/pepper puree sauce, some sweet potatoes and green beans.