My previous posts have somewhat emphasized the rigorous nature of the training. It has been, and today was no exception; just different, less, avoidance of burnout. While we kept active from morning to 7:30pm, we also did a lot of liesurely fun stuff.

First up in the morning was training in getting up & over a horizontal bar that you must pull up to, hook a leg and swing yourself up onto. Only, it’s not a bar but the equivalent of a tree limb, rough bark & all.

Then we did various jumps of all sorts trying to perfect a landing on a 3.5” beam (4×4) without falling off. Some of these jumps are 6’ and more and practice makes perfect. In my best effort I stuck the landing in a squat from 6’ three times in a row.

Shortly thereafter, Erwan got the sense that people were getting a bit fatigued, so we broke for lunch and got a bit of a speech from him on how this isn’t boot camp and that training for Natural Movement should be a natural pursuit; vigorous & disciplined, yes, but not Boot Camp.

We had a great salad with chopped figs & Brazil nuts and for those who wanted (me), prosciutto.

After lunch we just lounged around for a good while, maybe an hour before heading off to the lake for more water training. The hike is about 2.5 miles through jungle, tropical like terrain. Thorns, hornets, bugs, twisted wood and various obstacles of all sorts abound.

On the way we did some activities and took some photos. 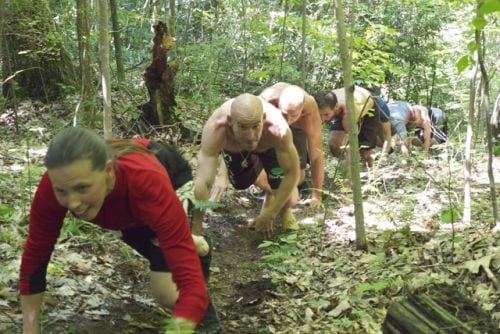 Barefoot in the Jungle 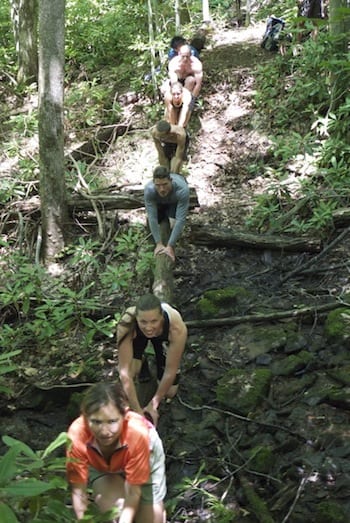 It was so glorious to finally arrive at the water. I was first in. Barefoot Ted had gone a bit ahead but found some wild blackberries and had picked a bunch. Good -n- paleo. I knew of another wild berry patch with some sort of blueberry — that Ewan & I feasted from the day before while pursuing a photo op — and after the water training he was taking the whole lot of us up there.

First we had a good amount of time to just enjoy the water, a real break we all took advantage of. I just swam around, did some dives off the rocks and really had a blast cooling off and chatting with the others. I haven’t talked about it but the social aspect of this experience is quite a pleasure; good. It basically started when 8 of the 12 of us met at the airport and hasn’t let up yet. Everybody is super cool to everyone else, there are no big egos, no annoying people at all. Barefoot Ted is a real riot, life of the party guy and Erwan & Vic have great humorous personalities (with lots of French banter between them that I sometimes translate for the others). As demanding as this pursuit can be, at times, you always know some joke is right around the corner. We Laugh. A. Lot.

After the long period of free time in the water it was back to training. Firs thing we did was to swim for some good distances on our backs with both hands out of the water, a skill necessary for lifesaving. Second skill we practiced was to dive from the rocks, remain under water and swim to locate a person who had already sunken beneath the surface, simulated by Vic treading water. We began at about 25 feet away, which everyone successfully accomplished and kept increasing to about double that. Quite a lot of fun; good, mutually encouraging competition and some real surprises from Maggie and Elizabeth who both made the longest distance along with a good number of the guys (I and Barefoot Ted did not).

Next it was a climb to up the cliffs via a circuitous route to feast on wild berries.

Then we did some more self-defense training in a wonderful setting and took a group photo. 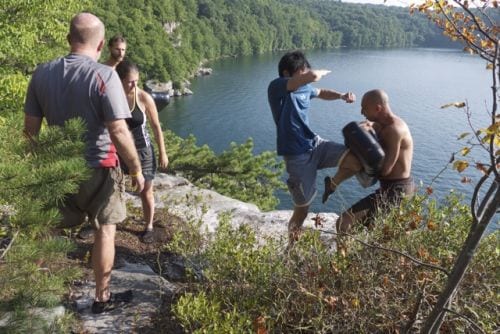 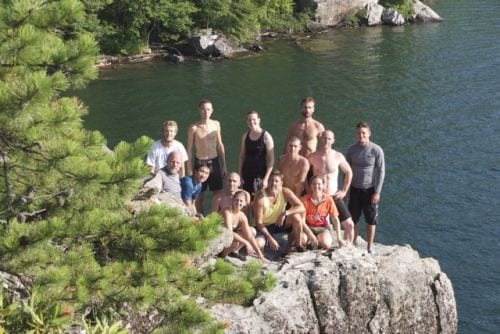 By the time we hiked it back to camp very worn out it was about 7:30 and time to call it a day. Dinner was ribs, so had to cook a while and we had a great meal around 9pm, in the dark. 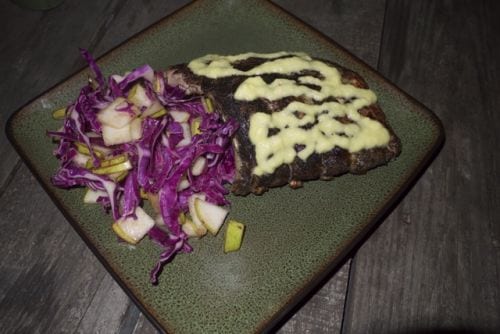 The slaw was red cabbage & pears with some sort of sweet tasting sauce. The sauce on the ribs was a puree of caramelized onion and fresh oranges. Way good.