Today was quite varied but the best way to sum it up would be combining things we’ve learned, often without thinking about them at this point. There is so much we’ve learned and used over and over that in some measure many things have become automatic.

The morning began, after breakfast… 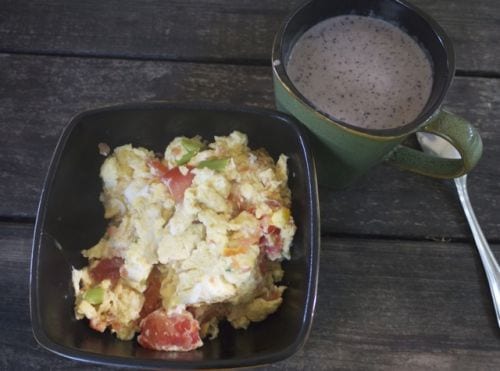 …with a 2 1/2 hour session in the beating sun rolling around on hot, bug infested grass to learn various ways of moving on the ground — applicable to stealth hunting or escape, perhaps — and culminating in an excellent session where all of that movement, weight transfer and shift was applied to self defense situations where you defend yourself when you’re on the ground and your attacker is either on top of you, or standing. Extremely informative and valuable. Well, actually that wasn’t a culmination because Erwan created a combination drill that kicked our asses at the end. So why torture yourself in the sun for 2 1/2 hours? The answer is that it pays to do that, sometimes. You never know when you might be called into action that requires maximal effort for long periods in awful conditions.

I retreated to the cold shower before lunch. 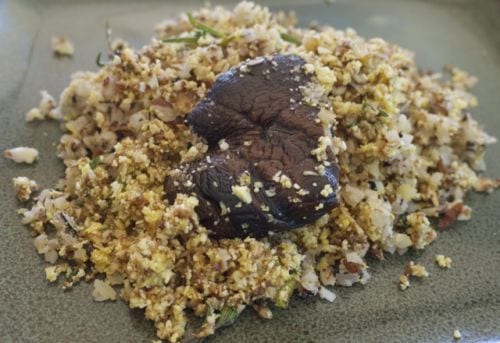 We had a pretty good break, actually. About three hours. I managed a 45 minute nap, and I never take naps. I actually went to sleep.

So by mid-afternoon it was time to take up training, again. First stop, the NovNat Jungle Gym.

I can’t remember whether it was yesterday or the day before (we’ve been here a month, already…) but I did manage to get myself over the horizontal bar using one technique, both sides. This is hard to do, folks, and I have the bruises and scratches on my arms to prove it. Today Ewan showed us a different technique that’s a bit more difficult in terms of weight shift but can be compensated for with strength. This was my first clue that my strength is really sapped because I couldn’t even begin to execute this move and after several attempts had to give up because I’d just lose what little strength that remained.

We then went over to the heavy logs that we cleaned and pressed on day 2 and where I easily handled the heaviest one numerous times. This is where I learned how depleted my strength was, because I had to dump my first attempt.

Oh, well. Part of this training is to learn your own limitations. It’s also about movement efficiency. In the role of trainer, Erwan, for instance, is continually demonstrating complex moves over and over, many times. And he’s as strong and fresh as ever. Is it because of raw strength? Well, he has a lot of strength and often demonstrates the pure strength move vs. the efficient, energy conserving one. But on balance he’s at the top of his game daily and hourly not primarily because of his strength but because he gets the job done using the least amount of strength and energy necessary.

And that’s a huge part of what this is about.

So then we moved onto a series of functional movements, the first being picking up 15’ long tree limbs of 6-8” diameter, getting them efficiently on your shoulder, balanced, and walking and squatting with them.

Next up was something I’d been waiting for: lifting, carrying, and throwing heavy things; in this case, large rocks. Turns out we also got to catch them in a number of different ways. I shot video of Erwan’s demo and instruction which I’ll mash & post when I get back as part of my massive wrap up post. 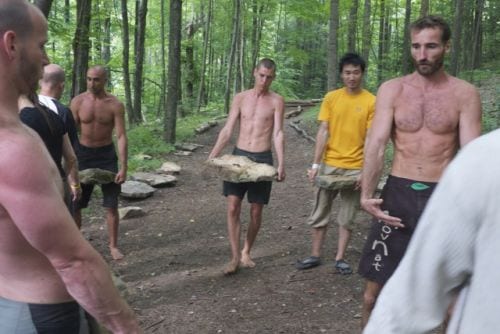 My camera wasn’t exactly configured for high speed photography so this one is blurry, but ought to look like fun. 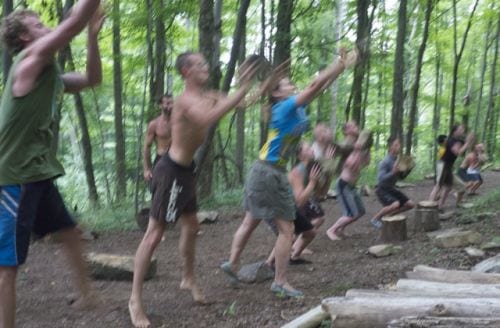 And on the catching side of things, here’s a couple of me. 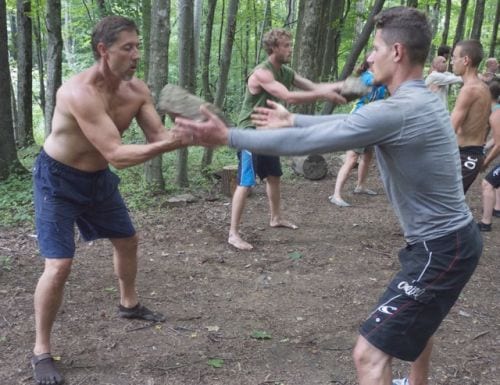 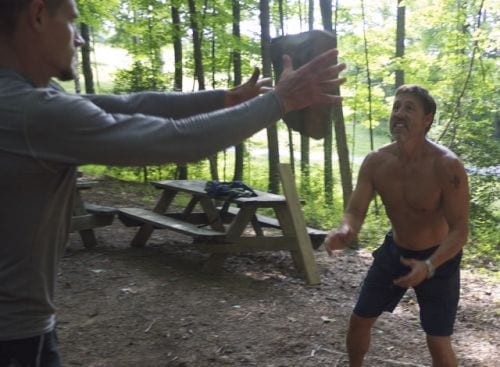 And after that it was a combo circuit of rock swings (like kettlebells), a high static jump onto a picnic table, jump off, four split jumps on the balance beams, a 40 yd sprint where the last 10 yds is on a balance beam, and then start all over — for 10 straight minutes, non-stop.

Then we called it a day and had dinner. Grilled fish, some red potatoes with green onions, and kale with avocado and mango. 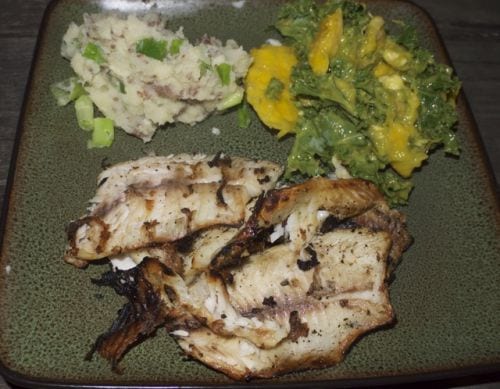 Tomorrow the show ends. It ends with a fasted workout in the morning that we’re told is going to have us on our knees but with ear to ear smiles as we have our last meal prior to departure.

So I’ll leave the camp at noon and if all goes to plan, arrive back in San Jose at 9pm Pacific. I’ll put up a final wrap up post on Sunday.