MovNat Day 5: The Gauntlet and a Wrap

Flashback Day 2: We had taken the jungle trail to the lake for incredible swimming for fun; anxious for it, because normally we’d have gone day one, but rain prohibited. We had a blast just frolicking and then the training. Water training, for me, doesn’t carry an iota of drudgery, unlike ground-based training. I just love the water and on top of that, you stay cool. And movement is more efficient — at least for me — in that I naturally invoke more functional body parts such that I don’t exhaust so easily or quickly. I’m naturally more efficient in the water, a subject I’ll expound upon later in this post.

Erwan had a magazine deadline to get some photos in and I had a quality photo rig, so Vic and the others headed back on the 2.5 mile trail and Erwan & I stayed behind to take some shots. And we ate berries as blogged previously. But on the way back I brought up the subject of the last day of training, the no-breakfast, all-out compilation of all we’ve learned: Saturday morning; the dreaded Saturday morning.

I sensed there was drama involved, but I was happy to go with it because I knew that in the end, even if I vomited and cried, I’d eventually end with a smile.

Such is the wonder of the human-animal condition. How funny, how wondrously ridiculous, how inspiring and how goddam amazing is it that we have in us the virtuous capacity to pay a decent fee, fly across the country (or from Sweden, as Elizabeth did) and endure all manner of discomfort — if only to get a small 5-day slice of Real Life.

But I recognized it from the get-go. All week long I was reminiscing. I talked about it with Erwan a number of times. This week brought back so many childhood memories: climbing willow trees, exploring every inch of my grandfather’s 10 acres on the Truckee River just west of Reno, Nevada where we lived. The fishing in that river and the trips to Pyramid Lake and the Klamath River. The bird hunting and the deer hunting trips. As a kid, this was natural, and we moved, and we moved in context. We had no need or want of "Natural Movement" vis-a-vis any "reawakening" because we lived it — if not every day — a good bit of the time. And we didn’t think about it that way because it actually was natural, for us.

And then we lose sense of who we are; or, at least I feel that I did. So a reawakening it was.

Day 5, the final day, began without breakfast, with an assessment of progress in various skills. We were filmed on day 1, then filmed again for comparison. After a brief interlude it was time for the final challenge.

The weather, as I’ve recounted, was not the best on day 1 and while threats of rain persisted throughout it actually turned out to be beautiful on days 2-4. But as if to call in an overdue debt, the sky began to darken only moments in advance of our last adventure together. And then it darkened more, as if to impress upon us a deep sense of foreboding as to what was in store for us. And then it darkened even more; a dark cloud, visibly and rapidly descending upon us. The fear & loathing was palpable…

…Nah. Actually, we were chomping at the bit. I just though the drama would be fun to write…

And so it was that as the gust front kicked in and the clouds burst into heavy rain, Erwan called out the "Let’s Go" and we go’ed. In the driving rain our first stop was a heavy rope suspended between two trees at a distance of about 50′. As we took our turns hanging on, hooking our feet and transporting ourselves from one point to the next the others did continuous movement: squats, half-squat holds, pushups, splays, planks, one arm planks, punches, kicks, elbow punches and more. Continuously.

This never ended. From one movement to the other, nobody stood around. And we did lots of movements, eventually driving and diving into the jungle on all fours, sometimes on a path and sometimes in the raw. Every obstacle encountered was overcome using some skill we’d learned, either by going over, under, around or hauling it out of the way.

There was even a 20′ patch of crotch-deep mud. We went through that twice, for fun.

This went on for over an hour. How long exactly I won’t say because I don’t want to give away any suspense, but I will say that there’s not a moment’s rest in any of it. And we all made it back alive and intact. (Note: Click on all images below for the hi-resolution versions.) 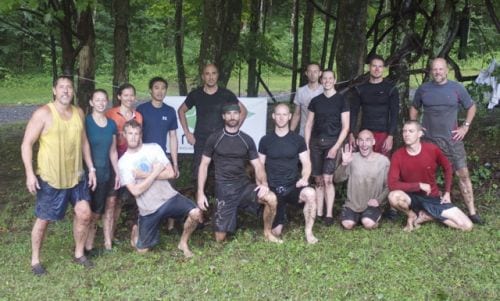 And while I didn’t puke, nor cry, I did end up with that smile. 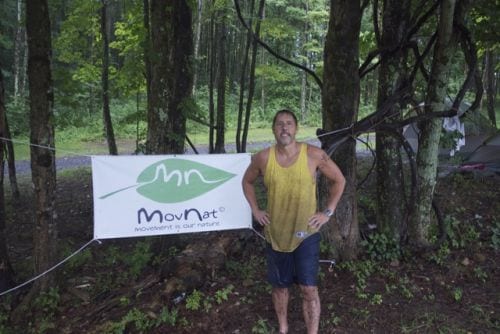 Some cleaned off massive amounts of mud and debris while others chipped in for our final meal together. I’ll speak to the level of cooperation among us in the wrap up portion of the post. 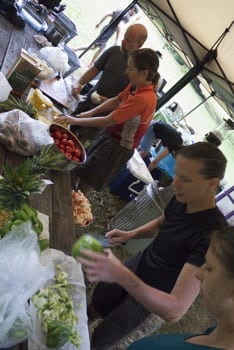 Time for a massive mixed grill. 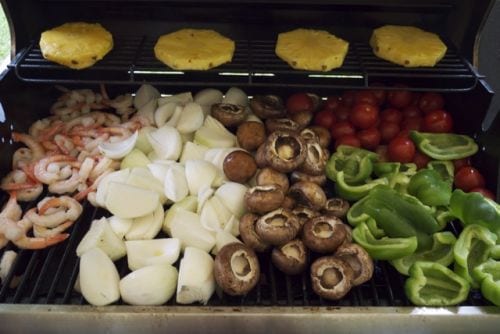 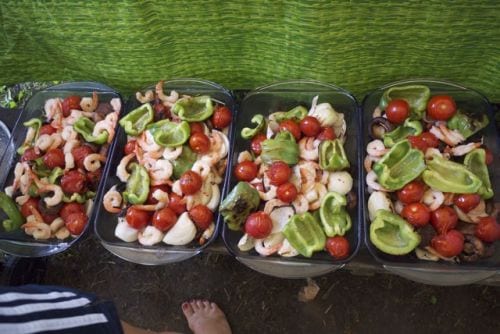 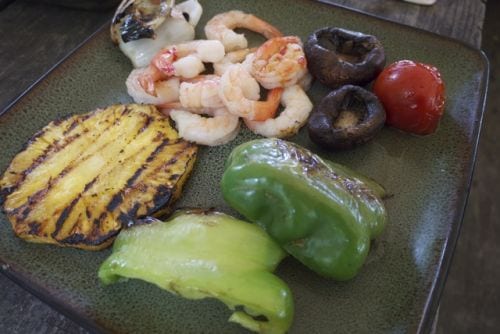 And shortly after that last meal we said our goodbyes and headed off back to the human zoo in which we spend the vast majority of our lives, fretting about all manner of quotidian minutiae that we’ve no real control or influence over, devoid of natural, human animal context, but in which we’re trained like seals bouncing balls on their noses to care about and pay attention to.

There are many aspects of this beautiful experience I could write about but I’ll stick to just a few. To echo the foregoing paragraph as a start, it could be suggested to Erwan Le Corre that what this is isn’t "training" at all. This version of the MovNat course is called "Reawakening." And perhaps that’s a good start. After all, we weren’t "training" in the sense of doing something humanely unnatural like reading a daily newspaper and getting worked up and stressed over things that will never affect us and over which we have no real control or influence, but simply rousing that hibernating inner animal to a set of actions that have been natural for eons and which merely require the application of a context.

Humans always seem to be competing. It’s taken as given that competition among humans is an a priori good, i.e., you don’t even need to get up off the couch to know it’s true. And for all of my life I’ve believed that. Now I’m not so sure.

While competitiveness does have application and value, I believe, is that the primary value we ought to be seeking, or, might we put cooperation first? I say that because I noticed two applications of this idea throughout the experience, on an individual level, and on a group level.

I noted a few things. While myself and others were getting all bruised & scratched as we reconnected with natural movements, Erwan & Victor had none, and they do this over and over, day after day. Is their skin somehow super human, or is there something else to it? Are the scratches and bruises a necessary aspect of all these movements or, are we doing them wrong? Is one part of our bodies in competition with other parts? Is our mind in competition with our bodies? Is this a manifestation of an old & tired notion that our minds and bodies are somehow in endless and eternal conflict, the one with the other, an endless dichotomy?

And if so, what are the social ramifications? After all, if we wear our individual bruises as badges of honor rather than recognize them as a sign of unnecessary travail, how far of a stretch to imagine that our damaged, manipulated, worrisome personal relationships and our wrinkled and torn social fabric is merely an outpouring of the same fundamental struggle?

Here’s some context. Never in my life have I seen a group of 12 individuals, strangers to one another, act so very cooperatively and mutually supportive of one another. If I could sum it up, MovNat placed competition and cooperativeness into a proper human values hierarchy.

You see, the real competition comes from within. You compete against yourself. You strive and struggle to improve while encouraging others to better themselves. You get better by being better, not by fooling yourself because others have not improved, or done worse.

This was the MovNat experience at its core. Everyone improved. Everyone encouraged everyone else to improve, enthusiastically cheering on all other’s accomplishments without fear or trepidation such accomplishments would make them look or feel worse.

If you want to get better, you have to get better. It’s all within you. Competition is often misguided, misdirected and counter-productive in The Zoo Human.

Erwan le Corre is a natural at this and my only reservation is that his knowledge and experience are so deep (see here to learn of his background) that he has a real challenge ahead of him to both maintain the profound integrity of MovNat while at the same time, taking it to a more mainstream level. If I had to summarize Erwan’s skills: part Cirque du Soleil acrobat, part gymnast, part mixed martial artist, part nature survivalist and part dolphin. How in the world do you replicate that? On the other hand, this is a very good start — widely accessible and local. I can envision a gym like StrengthBox in that video, combined with regular weekend group outings in nature to apply what has been reawakened in the gym.

This is by no means more than an infinitesimal slice of what we witnessed on a continual basis over 5 days, but it gives you a taste: Erwan and MovNat in Action.

There is a grace and efficiency to all he does and teaches and this is why there’s never a scratch on him, while the rest of us were bruised and scathed. It’s not primarily about muscle and will, but about reawakening your muscle to work cooperatively and to use your senses — always — in order to be profoundly aware of the entire integrated texture of your surroundings.

There is so much more I could talk about, like, the evening talks given by Erwan on such topics as Natural Movement itself, nutrition, metabolism, fasting and more and which often motivated discussion beyond the time we all should have been in bed.

But I’ll save all that for you to discover when you get a chance to attend a MovNat experience. 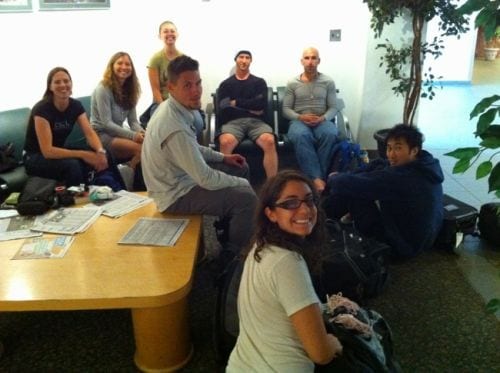