Enough people have asked for me to take some video clips of my workouts that I’ve finally obliged.

So here’s six reps of deadlift at 255 and seven clean reps of standing press at 115 with two cheat reps tossed in at the end. Previously, I had gotten to 250 on deads doing sumo style but decided to go back to conventional. That was a few weeks ago and I took it up at 205 and now have surpassed what I was doing in the (easier) sumo. As for standing presses, I was up to 130 on those but it was getting way too compound (kinda like the cheat reps you’ll see). So, we took it to 105 where I could do at least six clean reps and I’ve been advancing it since.

I also shot a clip of seated rows at 220, but my form really reeked when I looked at the video so I’m going to brush up a bit on those.

Later: Damn, I forgot to include my post workout meal. 3/4 pound of burger done on a Foreman style grill to pretty well done in order to make it a lean burger. Did something quite interesting with the mash (incidentally, I’d be eating white sweet potatoes instead but no one seems to have them just now and I don’t care much for the orange ones). After draining I added 1/2 cup cottage cheese and a tbsp of yogurt, both low fat. It was really tasty. 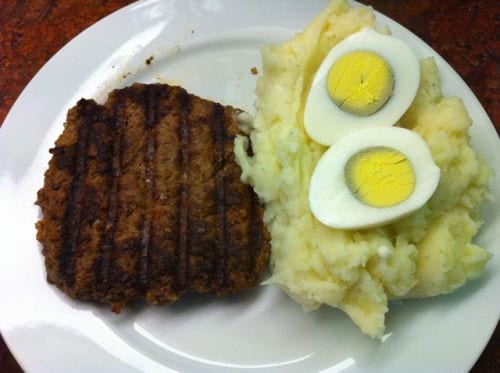 So, not perfect paleo, of course, but reasonably primal with the goal of keeping the fat in check and the protein & carbs high for the sole purpose of post-workout glycogen replenishment and continued fat burning.