So much going on that I only have time for a few quit his and random updates.

~ Entirely experimental for now but I tossed together a personal blog for those who might be interested. I’ve been toying with the idea of making FTA less about me and more about the community, the process, the science, food, evolutionary logic, the successes and so on. It’s totally experimental for now. One difficulty is in drawing the line; i.e., when something personal is also likely to be of particular interest. Well, in any case I’ll probably publish a list here each week of my personal blog entries for those who want.

~ I have not had time to watch this 30-minute video yet by Dr. Chris Zaino on Cholesterol Myths, but it comes to me highly recommended.

~ And here’s an all-in-one article on cholesterol and the many myths associated with it, from Mercola.

You are probably aware that there are many myths that portray fat and cholesterol as one of the worst foods you can consume. Please understand that these myths are actually harming your health.

Not only is cholesterol most likely not going to destroy your health (as you have been led to believe), but it is also not the cause of heart disease.

And for those of you taking cholesterol-lowering drugs, the information that follows could not have been given to you fast enough.

~ On the we evolved as meat eaters front — you veg*n dimwits — several interesting things. First up is an NPR story stating exactly what I’ve told the veggies and vegans innumerable times:

It wasn’t a very high-calorie diet, so to get the energy you needed, you had to eat a lot and have a big gut to digest it all. But having a big gut has its drawbacks.

"You can’t have a large brain and big guts at the same time," explains Leslie Aiello, an anthropologist and director of the Wenner-Gren Foundation in New York City, which funds research on evolution. Digestion, she says, was the energy-hog of our primate ancestor’s body. The brain was the poor stepsister who got the leftovers.

Until, that is, we discovered meat.

And now comes evidence of meat eating that’s 3.4 million years old, 800,000 years before what was previously established. The only real rub seems to be that archeologists haven’t found "stone tools" in these areas. Well c’mon fer fucksakes, it doesn’t take a genius to logically deduce that the first stone tools were simply idly strewn rocks our ancestors discovered to be useful and it’s that recognition of utility that eventually gives rise to what we recognize as stone tools.

Dr. Alemseged braced for such reactions with confidence.

“Few if any will doubt the authenticity of the cut marks, once they examine the evidence,” he said in an interview. “No one will question the age of the fossils. But who made the cut marks? Maybe there was another, more evolved species around at that time, but that we don’t know. And where are the tools they used? If they were just stones picked up, unmodified, they may be archaeologically invisible, hard to identify.”

Cut-marked bone at 3.4 million years ago takes the title of First Meat-Eater away from the genus Homo (Homo habilis, Homo erectus,…. , Homo sapiens) and gives it to the only hominin species known at the time from that region of Ethiopia: Australopithecus afarensis, known for being Lucy’s species.

If you’re not quaking in your seat right now, well, then you have got some serious nerding-up to do. This is kind of HUGE: Lucy’s relatives, and maybe Lucy herself, not only used stone tools but used them on big mammal carcasses!?

So does that mean we’re really Australopithecus sapiens, or does it mean that Lucy was Homo afarensis?

~ I didn’t jump on this bit about fructose and cancer cell metabolism precisely for the reasons outlined in this excellent post by Frank Hagan.

I am as eager as the next low carber to pounce on a media story that equates fructose with cancer, but let’s be honest: this study doesn’t say that. We have a duty to try and report things accurately, although for us laypeople, it can be difficult. Remember, we are critical of the old idea that eating cholesterol added cholesterol to the bloodstream. It makes sense on one level, and that would be great, except it simply isn’t true. We know that now. Why are we so quick to say eating sugar feeds cancer? We need our theory validated with research.

As Frank indicates later, sugar itself probably does contribute to feeding cancer and very low carb diets might help slow progression. I’ve blogged about that before and think it’s plausible, just as fasting seems to be therapeutic. But as we’ve talked about many times before as to how fructose goes right to the liver, like alcohol, it doesn’t make sense that it could feed cancer cells anywhere except, perhaps the liver. If you want to make a connection with fructose then it would be how it contributes to fatty liver, and how liver cancer can be the end result of that nasty progression.

~ A couple of meals. First, a BIG post workout meal at a local Hofbrau. Lots of roast beef, mashed potatoes and cottage cheese. 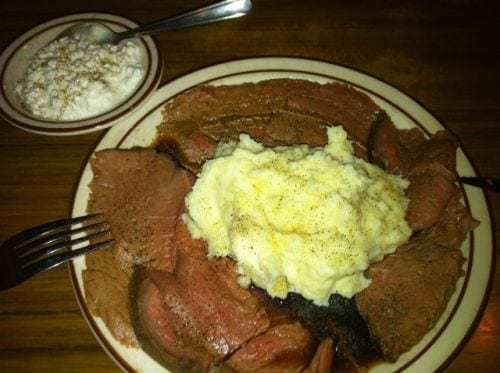 But not always… Here’s my Blue Cheese meatballs. Three of them, with bacon bits. That was the entire meal. They were large meatballs, though. 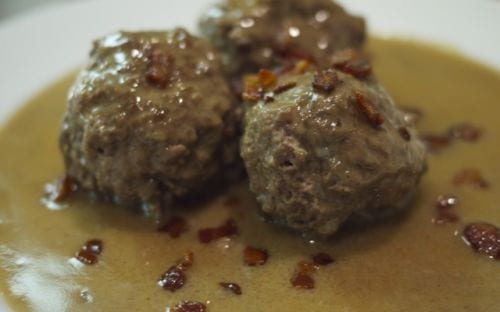