I really didn’t see this coming

Throughout my progress from initially starting the process by eating high-fat/low-carb paleo/primal combined with episodic fasting and brief intense workouts I often remarked at how non-hungry I usually was. And that’s a good thing.

But what if when you do eat — and this is very paleo — you pretend there might not be another meal for a good long while? Suppose you made a kill on the Savannah. Are you going to stop when you’re full, or are you going to gorge yourself silly because of all the unknowns that await you? After all, you can always stop eating. There’s never a guarantee that you can start.

But then again, evolution really only "cares" about carrying the genes forward successfully, so perhaps "pigging out" isn’t optimal for health in a longevity sense, but only in a big-fucking-strong-sperm-donor-to-the-masses right now kinda way. Put a different way, perhaps it was essential survival behavior in the Paleolithic and beyond, but essentially only to impregnate or bear offspring and care for them long enough. Frankly I have no certain idea. It’s all speculative and the logic of evolution and natural selection can only give us clues as to what sorts of evidence to look for.

So while we’re exactly right that we are adapted to eating animal flesh, seafood and all manner of plant material — and not Hot Pockets, Pop Tarts, Cheerios or Pepsi-Cola — this should principally be taken to mean that we are generally adapted to an extremely wide range of food. It says nothing about what’s optimal. Real Food is most likely optimal, in various levels of variety including macronutrient ratios and total energy consumed.

In other words: lots of variety, random eating schedule (including fasting), varied protein, fat, carb ratios and varied levels of consumption all in the context of Real — Primal — Food.

And so the rest of this post is devoted to one aspect of that, one that a lot of people don’t ever do because…"I’m not hungry." Here’s two meals, both break-fast meals (16-18hr fast). The first one is post workout as well, and the second one is a non-workout day. 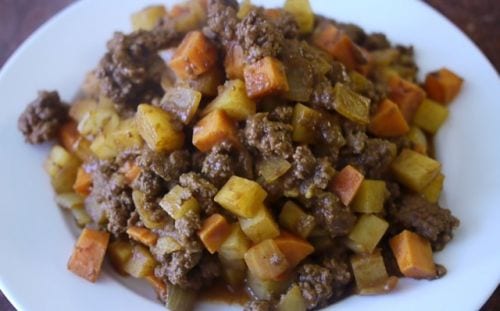 This was an on-the-fly toss together. One pound of TJ’s 96/4 lean ground beef fried in it’s own minimal fat with 1/4 onion and 2 cloves of fresh crushed garlic. Once the beef was done I added about a cup of beef stock, a tablespoon of yellow curry powder, 7 oz of cubed white potatoes and 5 oz of cubed sweet potatoes. I simmered covered until the potatoes were soft, then thickened with 2 tbsp tomato paste.

That’s a full sized plate, and here’s the profile or "mountain" view. All images can be clicked upon for high resolution versions. 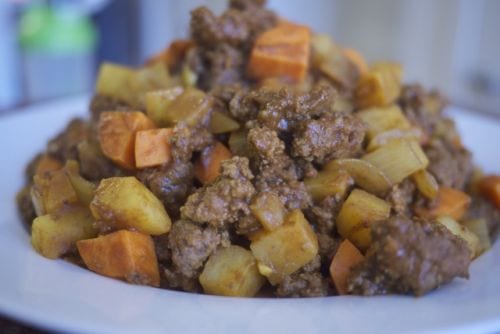 But that’s not all. I also had 2 cups of whole milk mixed with 60g unsweetened whey powder. And still not all, I polished it off with a half of a large cantaloupe, clocking in at 1 pound, 3 oz.

I had another, albeit much smaller meal about 3-4 hours later and then a final one a few hours after that. Interestingly, I had woken up that morning way bloated. I mean way. We had gone out to dinner with a friend and I don’t know what it was but I got awful heartburn, slept like crap and ended up downing a couple of liters of sparkling water during the night to quench the fire. Within hours of the above meal I was peeing like crazy, dumping water like crazy. Hmmm… That was yesterday and today my pants are once again nice & loose.

Alright, next up is this morning’s break-fast meal at a restaurant I like to go to because their weekend special breakfast steak is really good; and they serve it with three instead of two eggs and they cook them in butter for me. 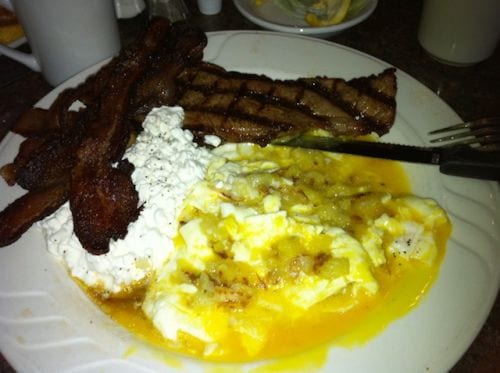 That’s about a 7 oz grilled tri-tip steak, three large eggs o/e, 2 oz of my wife’s potato, 1/2 cup cottage cheese, and a side of bacon, four strips. And coffee.

Since this is a non-workout day that meal got me better than halfway for today. I’ll eat once more.

So I wonder, how many out there have ever done 250g of lean protein in a sitting (about 2 pounds of meat)? And, why wouldn’t or couldn’t you do that, at least now and then? If it’s because you physically can’t, have you been exercising (practicing)? If you think it’s because it’s not paleo, then I highly doubt it. Sure, paleoman would not have done this every day, probably not every other day.

And that’s what I’m saying. That first meal is pretty ginormous, probably one of my biggest ever. But those are reserved exclusively for:

And that doesn’t mean I always do it when the above conditions hold either. Sometimes I just spread it out, or even eat a small meal that’s mostly protein and save the rest for later.

The point is to not do the same thing all the time. When people talk about how many calories they eat each day, how many grams of carbs, fat and protein, I kind of chuckle. That could never be done in the paleolithic, and not only because they didn’t have scales. They didn’t have generally reliable sources. So while all the foods above aren’t strict paleo (though I’d argue they’re Primal), I think there’s good support that such mixing up of energy intake and macronutrient ratios has a lot of support in a paleo context.

I can remember a lot of times reading what Keith Norris was eating for his meals and I can remember that even if I was hungry, just seeing a picture and reading the quantity he put down took away my hunger. But now I am enlightened.