So You Think You Can’t Cook?

As you probably know, I’m no snob when it comes to grassfed beef. Sure, I love it, use it a lot, but there’s just something about the "grassfed" culture in the paleo movement that rubs me the wrong way, just a tad.

There’s no question it’s the better choice on a number of levels, but to my mind goes far beyond any 80/20 consideration. Someone eating nothing but supermarket meat and veggies, no junk food or cheats, is well above 90%, even 95% paleo compliance and eating healthy! I’m not knocking grassfed meat at all, but I also don’t want to discourage someone from the paleo scene because they feel they don’t measure up if all they can reasonably source is grain finished meat due to budget or other considerations. Or, maybe they just don’t want to bother. Their choice, and I’m perfectly fine with it. On top of that, frankly, is that concerns over the environment and sustainability simply fail to keep me from losing a microsecond of sleep. I’ll leave the hand wringing to others. Hopefully, it never gets this bad.

That said, I encourage the preference for grassfed, when you’re ready (it took me a while), for two reasons primarily: it’s probably slightly healthier (and most find it tastier) but more importantly, the animals are respected for their natures. Even so, there are some operations such as Prather Ranch that take great care to raise their stock humanely but finish them — in addition to chopped forage — with some organic barley & rice. Accordingly, it’s not "grassfed" that’s the end all, be all, but that the livestock are properly attended to.

So, down from the soapbox and into the kitchen, here’s last evening’s preparation, dedicated to those who want it simple, quick, tasty and economical. One of the things I like to keep in the fridge is Trader Joe’s pre-cooked pot roast. They come in 1 pound packages and I think cost somewhere between $6-10, but I don’t recall. Then you need some beef stock (TJ’s has that too), half an onion, and some potato, sweet potato, or whatever you like (carrots, turnips…some sort of root, preferably).

Just cube up the pot roast, put it in the cast iron, add a cup or so of beef stock, the onion coarsely chopped, and your root veggies. Bring the stock to a boil, cover, and simmer on low for 10-15 minutes or until the root veggies get soft.

Then put it under the broiler (low setting), 2nd shelf down and let it crisp up for 5 minutes, turn with a spatula and then do the other side.

This is what you get, and it’s delicious. Click for the hi-res. 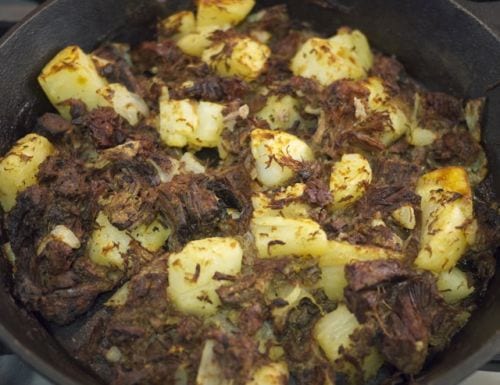 There’s just something about slightly dried & crisped pot roast that I just love, and especially when you have the moisture of the onion and vegetables to balance it out. So give it a try.