Life Gets in the Way; Oh Noes!

Likely the biggest head shaker for me these days is the way I observe so many people conducting their lives in a sort of planned, scheduled manner. It’s not the idea of planning or scheduling that makes me grin, but the underlying ferocity of it — as though it’s some guarantee that you’ll be alright if you simply plan, schedule, then employ the discipline to see that planned schedule through with enough righteous resolve to lop off any heads that get in your way.

From a man’s perspective, I think women are generally more susceptible to this, especially with young children and particularly, first time mothers. And I say that because I have as reference a mother who raised us four boys — myself being the oldest — and two grandmothers who raised two daughters (maternal), and five boys and a daughter and got them out of post WWII Germany to America in the 50s (paternal)…as well as a great grandmother (maternal) who raised a boy and a girl on her own through the Depression and who I had the great privilege to grow up around (she had my grandmother at age 14). She didn’t die until I was in my late 20s. I must tell you: growing up with a great grandmother is quite a special thing. The stories she told… Those women were all giants to me, all different, and none of them was the slightest bit like what I observe in women here on a daily basis. I dunno: "Quantum Overprotection?" Anyone have a better moniker? It’s weird. If anyone had reason to be super protective given the nonexistent "social net" and a host of other "hazards," it was those great giants of women in my life. Now, you have "mothers" slathering their kids in every anti-bacterial product and sunscreen they can buy. Shrewd marketing leading the blind and ignorant, I guess.

As you know I’ve been moving house, over about the past week. But this time, I handled it quite differently. Rather than dive in and go, go, go, I just flowed naturally. We used professional movers — guys I and my family have used before. We did some of the packing, had them do some. Then they did the move, but the unpack is for us to do. I want to get rid of tons of stuff (see here, though that’s just inspiration: 100 Things). But even so, we’re taking it very easy. All the stuff was moved in last Thursday. That night, Bea & I decided to have a few cocktails and go out for a nice dinner, instead of doing anything (the bed was set up). 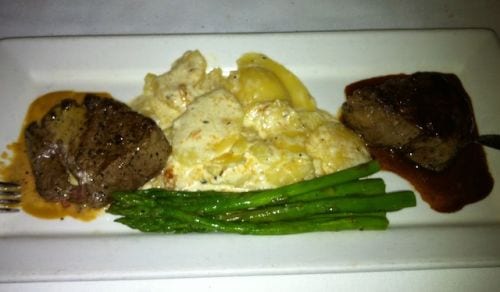 Friday happened, she was way tired and I just went out, got a roasted chicken from Lunardi’s down the street, and we did nothing. Nothing.

Saturday and Sunday were supposed to be the big work days. Well, our friends Robert & Julie from the lofts called around 10, intending to stop by around 11; and so they did, but with a bag of groceries, grassfed franks from Lunardi’s and other stuff — just three minutes down the street (and across the street from Whole Foods). So we grilled those up, dived into the scotch (wine for the girls) and they helped us unpack, organize, and get the living room and dining room into shape. After all, we had a marathon to get through. Cards (Spades) happened until about midnight. Robert & I won, as is the natural order. 🙂

So by letting a little Real Life in to disrupt our "schedule," we actually ended up better off. But that was unforeseen. Just a bonus of life, of friends who we’re already missing because we no longer live in the "Friends" or "Seinfeld" dynamic we moved away from.

But grassfed franks for lunch was not enough. I made another run to Lunardi’s, my frozen stock was in the freezer, and all I needed was a bottle of red wine and some fresh garlic. 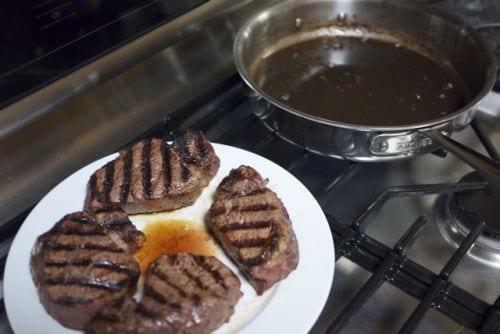 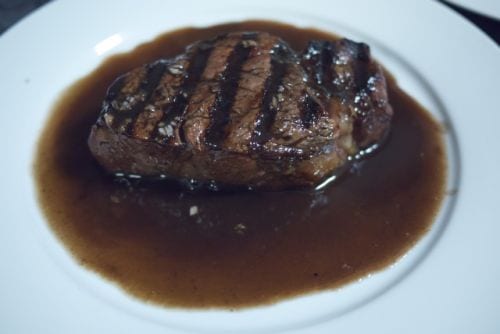 Sunday was some work on our parts, and dinner was not worth mentioning (crap fest, but we were too tired and frankly, craving a bit of McD crap).

So Monday comes after Sunday and while we broke down a few boxes and I did a bunch of cleanup (including getting the housekeepers going at our old place), we just took everything in a leisurely stride. We’re here, things are getting done to our liking, and we’re not killing ourselves under a schedule with no discernible purpose. Invigorated by the memory of Saturday night’s very pure reduction of red wine, stock, and garlic, I went at it again, this time with ribeyes. 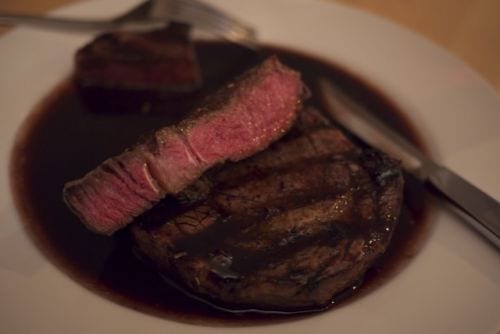 Not enough. Not yet. Yesterday, Tuesday, we made good little progress on the whole project. I had to meet Bea at the veterinarian (HUGE post on the 1 1/2 month ordeal with Rotor — probable pancreatitis — and Mr. Peter Hyperlipid’s life saving help; coming up) in the afternoon, showing up barefoot, yeehaa! There are lingering issues, but I’ll blog that in a series or a long post. Just goes to show that animals — including humans — can do marginally in a modern, non-wild world.

The sauce reduction was great first time, a little less good second time, and I nailed the syrup the third time. It may have been that I chose ribeyes for round 2. For the third time around I went back to flilets and exercised patience with a very slow reduction. Here’s the deal: 1/4 cup red wine per serving, reduce by half, add stock about double that amount, and slow reduce, like on low. Add some butter (1 tsp per serving, or more) and spices to taste along the way. 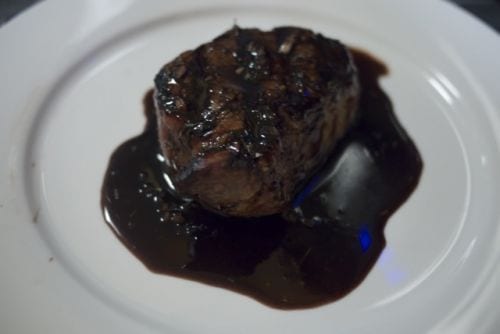 Yep, I got this reduction better than right. I also got the grill right. 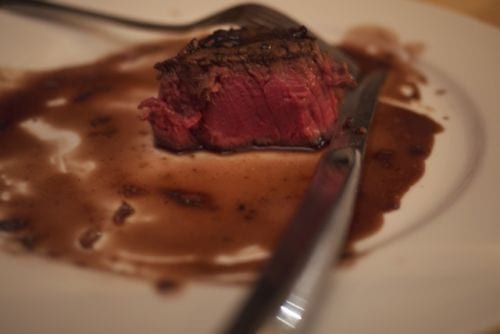 All this, in the middle of a move. Maybe a lot of people would have gotten it done a lot sooner. Has to be done, y’know. On the other hand, I have a certain contentment that in keying on the raw energy of the change, the move that we are excited about, I’ve turned it into various other things, including cooking, that I can imagine will serve our memories of the thing a bit better in the long haul.

I am impressed — that concept goes both ways — far too often with people who shun & spur life’s serendipities for the sake of discipline and a schedule that was put into a computer or a planner, and damn life!