The Food and Pics

Entries are coming in for the silly Free the Animal Rant Contest. So be silly. Give it what you can.

…The last three weeks or so have been gruesome with the move, et al. Worst of all, I came down with another instance of what I firmly believe I have Google diagnosed as trochanteric bursitis. I believe I’ve had it before, mistakenly thinking it was sciatica — which I have also had long time ago..but thought is was a different manifestation last time. I think it happened from just over use in the move, i.e., hundreds of squats and bed-overs per day for days straight (packing / unpacking boxes, assembling furniture, ceiling fans, mounting flat screen TVs to hidden wire perfection, and such all contributed).

The pain is awful — nearly constant and it’s worse when sitting standing, or laying down (you should see how I have to contort to sleep — I quit taking the 800mg Motrin I was taking for a while before bed). Walking is the best relief. So, after nearly three weeks of it  and no gym — and it’s getting better — I did a relatively light workout at the gym today and had substantial relief for several hours. Now, the constant pain begins to set in, again, but diminished. I’m definitely on the downslope. I’m hitting the gym again Friday. Of note, I did 10 reps deadlift at 135 just to test, then went to other things to see if the hip stayed calm. No problem, so I came back and did a very easy 185 x 6. I may go for my 295 x 6 on Friday so I can move to 305. I really hate that I got set back from hitting that 300# deadlift mark through this period.

But I’ve been eating well. So disappointed I didn’t get any shots of the three pounds of tri-tip, two pounds of boneless pork ribs and a 1 1/2 pound roasted chicken on a single big platter I did this weekend for Bea’s local family. There was no meat left. This is my deal: no bread, pasta, rice, beans or any other woefully inferior cheap "nutrition," but, I’m fuckin’ gonna fill you up on meat if you’ll have it. How good a deal is that? 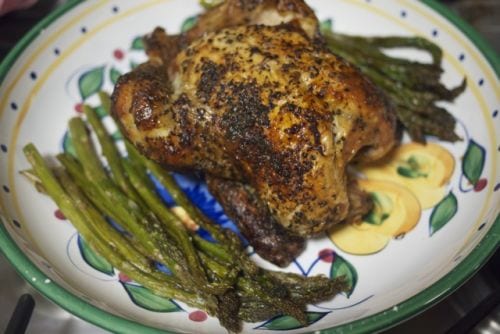 We have a fig tree in the new backyard, two lime trees, and a pomegranate in the front yard. Since we moved in I’ve been moved about how I might be able to use the figs. Ready. How about in a sauce with jalapenos? 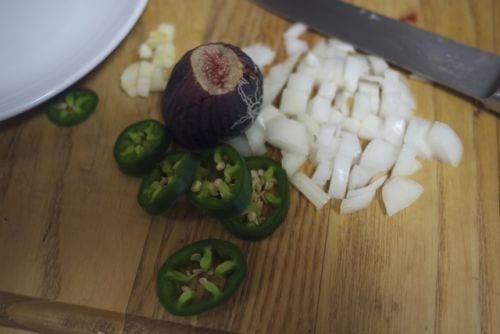 All that including the fresh chopped garlic & onion you see, went in the saute pan with a bit of butter. Then, all of it went into the so-called "magic bullet." I say that cause it sucks. I’m getting a Vita-Mix. Fuck bullshit.

So because there was a total lack of magic in the bullet, I ended up having to strain anyway, and so reduce more because the liquifies fiber — if i had magic — would’ve alleviated the need to strain.

But I’m getting ahead of myself. The very first step is to reduce red wine to a syrup. Do not introduce it to an ongoing reduction. Do this first. 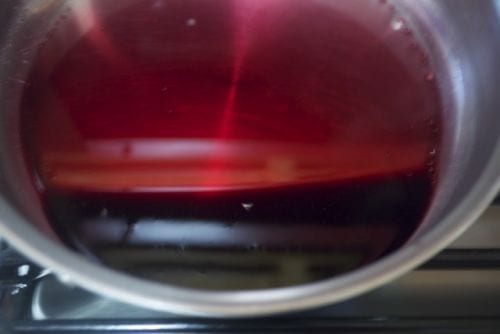 Then you add your stock & fixins and continue to reduce. I needed no thickener at all, so maybe a little magic happened.

Then I was done, with some Caprese salad left over and an heirloom tomato. 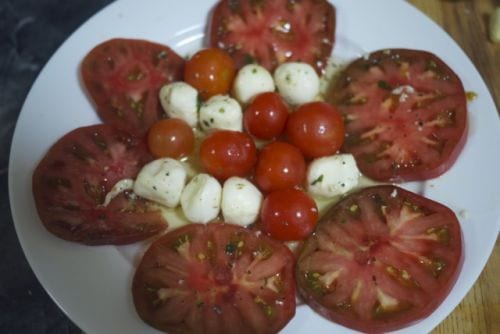 Oh, yea, all the peeps in attendance wanted grilled burgers even though I offered steaks. 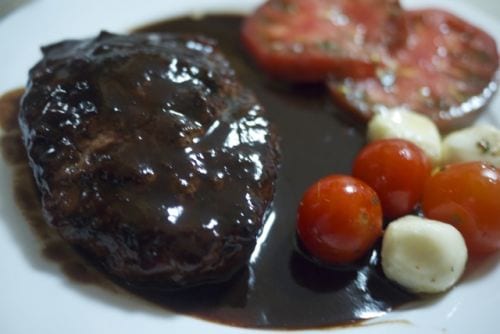 Last night was just Bea & I, and I had in mind an enormous salad of butter and green leaf lettuce with tomato (heirloom), finely sliced onion, peeled and cubed cucumbers, and blueberries… 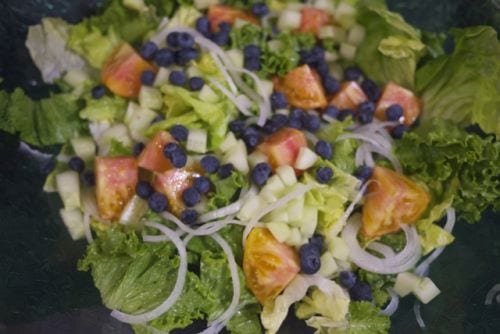 I just drizzled olive oil on it, and the juice from a half of fresh lime or so, from the backyard.

And then I grilled "country style boneless pork ribs" @ about $3.50 per pound. Get The Salt Lick dry rub, which I get at BBQs Galore here in CA, rub down the meat liberally and let it set 30 minutes or more at room temp. For these kinds of ribs where you don’t need to get them to fall off bones as there aren’t any, a low BBQ will do the trick, turn every 15-30 minutes for a total of 45-60, but watch. Done is done and you don’t want to dry them out. 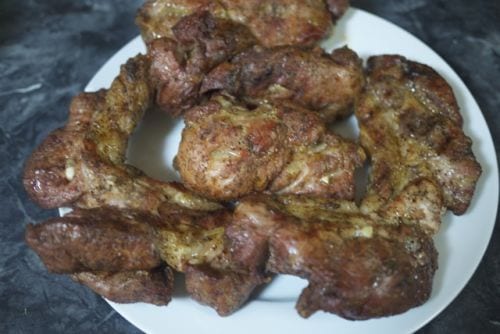 Today, I ate about a pound of those leftover, right outta the fridge, post workout. 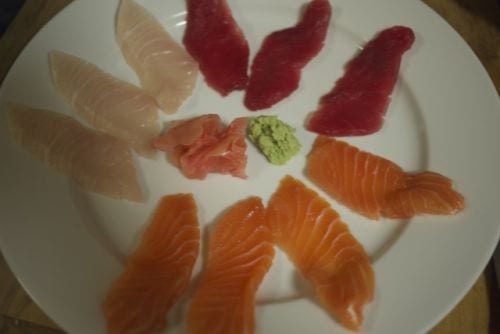 You know what? Upon serious reflection; Fuck vegans. Uh huh?