A while back I was at a local farmer’s market and acquired a couple of pounds of pastured port cutlets. I’ve done plenty of chops and various roasts in my time, but never, so far as I can recall, cutlets.

First thing to do was find a recipe. I tend to avoid recipes with an abundance of ingredients, complex preparation, or both. So this one at Cooks.com really fit the bill, with minimum modification required for paleoishness.

Dip cutlets into egg then bread crumbs. Fry on both sides to brown. Remove from pan and put into baking dish. Fry 8 slices bacon until crisp and put aside. Melt butter and add bacon, onion, mushrooms and oregano. Saute 2 minutes or until onions are clear. Pour over mixture on top of pork cutlets, then pour 1 cup beef broth over it also. Bake at 350 degrees for 45 minutes.

Well, I had friends over and so had to scramble and get a bit more pork down at Lunardi’s, a convenient five minutes away. They sliced them for me from two 1/2 pound tenderloins.

So I ended up with about 3 pounds of pork but that recipe looked like way overdoing it for just a pound. So, I just used one onion and about double that amount total of raw — not canned — white and shiitake mushrooms, chopped. Of course, mushrooms shrink down a lot. I stuck with the one Tbs of oregano, only used about seven slices of bacon, chopped; and of course, I substituted almond meal for the breadcrumbs. 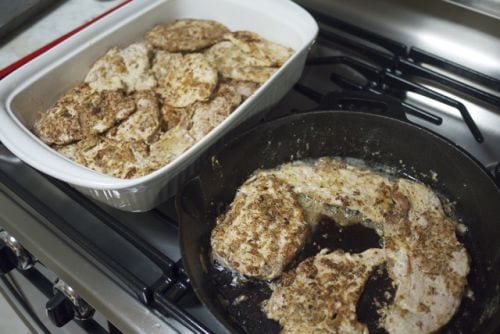 There’s the process of frying them up and moving to the baking dish. I used the drippings from the bacon which I fried up first, augmented with more bacon fat as needed.

After finishing those off I added a half cube of butter to the same pan, and did the onion, mushrooms, bacon and oregano as instructed, then pored it over the cutlets and added two cups of beef stock. Into the oven.

I made sure to leave just a few bits of onion, bacon and mushroom in the pan, added yet more bacon fat and lard and then tossed my fingerling potatoes in it, then moved them to a cookie sheet and into the same oven. After about 50 minutes, all was done. Be sure to click for the high quality image. 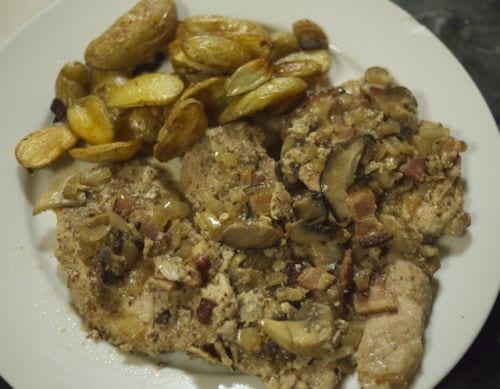 Certainly not my usual sort of dish but really tasty. No idea what they were thinking with a recipe calling for eight strips of bacon per pound. There was more than enough bacon flavor in this.

And yes, the pastured pork was superior to the supermarket tenderloin. Next to that we had a green salad with red onion prepared by Julie and later in the evening, fresh whipped cream sweetened with blueberries, on top of even more blueberries.