Here’s the view from the porch in Arnold, CA, at 4,500 ft elevation. We arrived after the 3hr drive from San Jose about noon today. Our neighbors who live here full time said it hasn’t snowed this much this early in over 10 years. I think we bought the place in around 2003 and I’m used to rain over the Christmas holidays moreso than snow — and it’s not even Thanksgiving, yet. Snow begins in earnest late December and lasts through March. …An April surprise, now and then.

Apparently, this all happened since midnight. 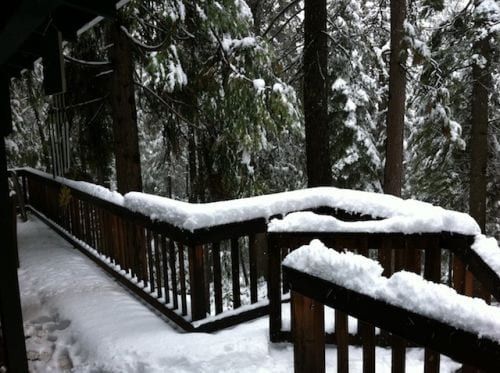 It’s snowing furiously, on & off, and word is, a possible 2-3 feet tonight. I just hope the tree branches don’t get so heavy as to take down power lines. I’d like to stay until our planned departure monday afternoon.

I’m drafting a rather extensive post on the implicit contradiction between paleo and Christianity writ literal (which could apply to any literally viewed religion). But it’s taking a while, I’ve got iTunes streaming wirelessly to the Bose, and scotch whiskey is in hand.

Here’s what just came up in the random mix.