To say that I’ve languished at blogging would be an understatement though, at the same time, it has forced me into writing blogs that are different than I normally do — and I’m embracing it. So this will be diverse.

First, I’m just working a lot. After essentially a 7 year vacation from my company, I am enjoying getting up early, working at home for a few hours, heading in and coming back in the afternoon to raw feed the dogs (I still have a super story to tell about that, and Peter-Hyperlipid was a huge help).

Way back when (1992) I started a company, built it up to over 30 employees, and hated the stress it caused; but mainly because I had to spend $200K+ on fucking lawyers every year. Long story…, but at base, I tired of it and so let the company shrink down so I was less of a target for the Federal and State mafia.

But now I’m back to work — hard — and rediscovering the challenge of hitting the gym and eating well. I spoke to that in the last post. But I’m really serious about this. Here I’ve been, blogging about Real Food for these last years, and I did not have the same workaday pressures most or many of you have. Well, now I do, and so I have come to realize how easy it could be to cave in an just go get a burger. Christshit; but Do. Not. Do. It. …Unless it’s an honest, earned cheat that’s rare.

So here’s what I did up tonight. That’s grassfed ribeye from Marin Sun Farms, coupled with those vegetables I hate: in this case, cauliflower; roasted at 400 in coconut oil, pastured butter, paprika and cumin. You know the drill about clicking on the image. 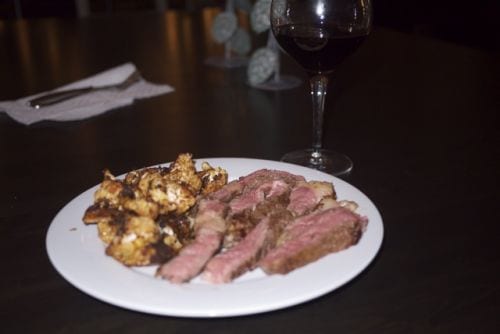 So that’s dinner. What else?

I’ve always thought that David Gilmour was the musical genius of Pink Floyd and Roger was the creative genius (It had to have taken at least two). If I go see Glimour in concert, I’m going to get a spectacular, bluesy performance but I’m betting Waters is going to be a total Spectacle, tomorrow night.

This has been a bit of a dream going back decades. I missed out on it way back when, but stoned, always regretted it and always told myself that if they were ever to tour again, I’d be there. Well, I hope they do tour as together as they could be but, this is different in that if they were to tour together, it would likely be some sort of compilation whereas, this is The Wall, done top bottom — four sides of vinyl.

It’s really, really tough to pick anything in particular out of 26 tracks to entertain you, make you cry and both. But here’s my lame stab at it because I essentially love it all; always have and always will. Nothing like a dark room, decent audio, smokable herb and Pink Floyd playing away in the darkness. Live; just a little. Or, is that “unhealthy” and worthy of Inquisition?

I’ve always loved Mother. And I’ve always see it as a metaphor and have used it as such over the years. When you hear “mother,” think of the overriding authority of your choice.

I so went back & forth on that with Hey You as a pick, for a number of stylistic reasons, but as I said…26 tracks. More than a couple, and it’s just gratuitous and I never engage in that…

Alright, so that’s your deepish metaphor and here’s your tear jerker…perhaps if you know the music, this scene from the film, and understand that Rogers’ dad didn’t come back from the European battlefields of WWII. …Oh and you get a little bit about Vera Lynn, who’s still doin’ her thing at about 92.

I think it’s tough to classify Pink Floyd as a pure rock band even though that’s the genre they’re played in, when played. I think, given The Wall, and even Dark Side of the Moon, that they’re some hybrid between blues & opera. But what do I know?

I don’t, really, know. Don’t care, and I have all of them. Every album. Even ones not depicted in this delectible creation. I guess this is actually why they are called al-bums. 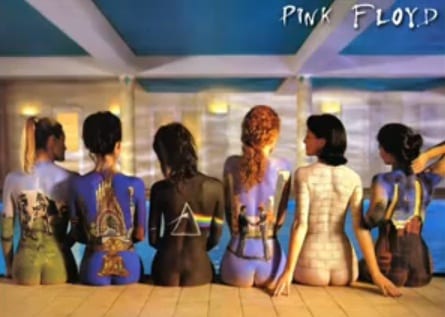 Alright. It’s 12:02am. I think I’ll see if there’s anything decent on the DVR and if not, hit the sheets.

Mama’s gonna make all of your nightmares come true; mama’s gonna put all of her fears into you.

See you on the other side.