~ Gary Taubes finally has a blog. Of course, you would have to have had been asleep under a rock not to already know that by now. His first and as of yet, only post — The Inanity of Overeating — has racked up 250 comments so far. And his new book, Why We Get Fat: And What to Do About It

~ Speaking of new books, Art De Vany’s The New Evolution Diet: What Our Paleolithic Ancestors Can Teach Us about Weight Loss, Fitness, and Aging

is out December 21st. I’m part way into it on my iPad (The Kindle version is already available) and will endeavor to have a review up by the time the print version comes out. Here’s the video trailer for the book featuring Art himself.

~ Reports of The China Study basher extraordinaire, Denise Minger’s demise have apparently been greatly exaggerated. And does she ever have some interesting plans in the works, including a possible peer reviewed publication thingy.

Top Secret China-Study-Related Mystery Thing: I’d love to spill the beans on this one, but they’re not done soaking and I’d hate to flood you guys with lectins. So for now, I’ll just say that I’m working on a thing with a person, and the person and I have the goal of getting the thing published in a well-known other thing, and if all goes as planned, the published thing should help combat the “but the China Study re-analysis isn’t peer reviewed!” argument. As soon as I can say more about the thing, you’ll be the first to know.

~ And speaking of China Study Bashers, Chris Masterjohn has a must-read on High Cholesterol on a Natural, Real Food Diet.

Lots of people find that eating a WAP-friendly traditional diet has no effect on their blood lipids or improves them, by a conventional standard. But I’ve had a number of people ask me, "why is my cholesterol so high on this diet?"

Or, "why are my triglycerides so high on this diet?"

There are a number of factors that affect blood lipids, and in the future I’ll present a more comprehensive view of this issue. For now, I’d like to explore the possibility that many people might experience a temporary increase in triglycerides or cholesterol when they switch to a traditional diet because they are actually curing themselves of fatty liver disease.

Chis, buddy, thank you so much for that. While indeed, most people report improved lipid profiles (whatever that really means anyway), I must get an email at least every couple of months from someone who has super elevated cholesterol, and here’s an example from the past. Lately I have stopped trying to involve myself in this issue simply because one, I don’t know and two, I don’t want to lead anyone astray. Now I can simply give them a link to your post and they can take it from there.

~ And speaking of cholesterol and fatty livers, I received an email from a reader the other day.

Here are some results from a reader of your blog. I want to THANK YOU for all the time you put into this. Please be aware (I am sure you are already) that lot of people are benefitting from your blog. 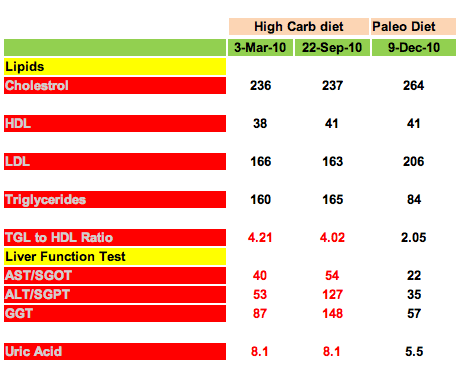 Are you noticing the Trigs and Liver enzymes? He continues.

I am Indian by ethnic origin but residing in Singapore for many years now. My lifestyle is sedentary desk job but I do high intensity weight training on a regular basis. I appear fairly fit to everyone externally – and all the fat I have had was always around my stomach – which I can conceal with my t-shirts or shirts well enough (read as – I am definitely NOT obese) […]

I did some routine blood tests on 3 Mar 2010 and as you can see from the results I had elevated liver enzymes and elevated cholesterol, triglycerides and uric acid. The doctor advised me to quit smoking, stay off alcohol and advised me a low fat, more vegetables, lean meat, whole grains, more fruits diet. The diet & smoking part I took seriously .My diet was mainly high carb. I religiously avoided “high fat” / “saturated fat “–. Ate lot of vegetables and fruits every day. Atleast two apples! I l thought fruit juice was healthy – so that was there as well. Whole wheat bread and whole grain cereals – the works.

He complied with the advice.

My next test was 22 Sep 2010. As the results show – nothing got better. Instead triglycerides went up further. Liver seemed to be in a worse shape – all enzymes highly elevated. I was following the doctors advise on diet but had no understanding of what was actually happening. I was diagnosed with a fatty liver (Ultrasound test). I had put on weight (10 Lbs) since I was a eating a lot more after quitting smoking. […]

I said “thank you, doctor”. I do my own thing now. I religiously studied all the information I could find from 22 Sep onwards! I came across PaNu first – which had a lot of fantastic information that made sense. That blog led me to yours – and this is immensely helpful as well. The fact that you regularly post keeps it “live” and so I got hooked on to Free the Animal. Now I am subscribed to and reading almost all the work that you guys have put up there .. Yours, PaNu, Hyperlipid, Stephans, Dailyapple etc – the “regulars”. […]

Also: NO WHEAT. NO RICE. NO SUGARY SWEETS. NO BEER. (extremist – remember ? J – and yes – still NOT smoking – its 9 months as of today and counting ) I did not have a single can of beer in two months. I had social drinks 4 times in the last two months – a glass of whiskey or a glass of wine or so. That’s it. And guess what my favorite “cheat” is – handful of raisins and cashew nuts. My sweet tooth had subsided after the first month or so. […]

I COMPLETELY REVERSED my fatty liver in 2 months by cutting carbs and eliminating sugar!!! A plug here for Stephan’s blog as well – his posts on Fatty Liver reversal were motivating and informative. My TG levels are now less than HALF of what they were. Blood Pressure came down from 140/90 to 120/80.

I lost 16 POUNDS of FAT in two months and my strength level is actually higher. I DID ZERO cardio. My workouts are mainly high intensity WEIGHT training which I do about only one day a week for about 6-8 minutes ONLY. In the last two months – I have been in the gym only 6 times totaling to about 30 minutes of training time in two months! cardio for weight loss? Another piece of rubbish.

I plan to continue this diet and retest results after 6 months. From reading all the information I know now that cholesterol numbers are rubbish – but atleast I would like to get my HDL higher since I think that is a “nice to have”. I also want to lower the TGs further. But I guess since the liver seems to be ok now – this should fall into place in some time as well. I achieved more than I had aimed for in the last two months ! Thank you Richard and also kurt harris, Stephan and all you guys who keep this “movement” alive!