Last night I took one grassfed New York and one ribeye out of the freezer from my Marin Sun Farms CSA. Submerge them in tepid water and they thaw within about 30 minutes.

Since I intended to sear and cook them in cast iron with enough leaf lard that they don’t stick, then deglaze with red wine (a pinot noir), reduce, then reduce beef stock and thicken, no seasonings or spices. Do it after. As always, click on the images for hi-res. 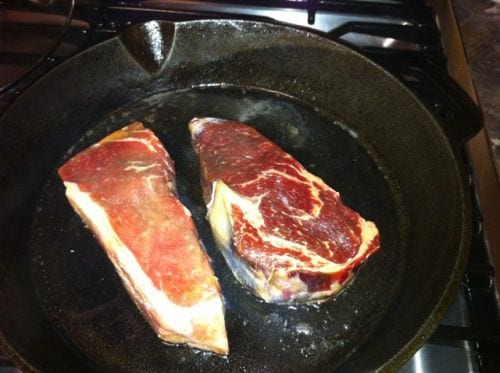 You really want to swish them around so there’s no stickage. Then, cover for 4-5 minutes. These are at medium high. Then flip ’em and go 3-4 minutes. For medium rare, I want to see some of the internal fat beginning to emerge from the sear. Done. 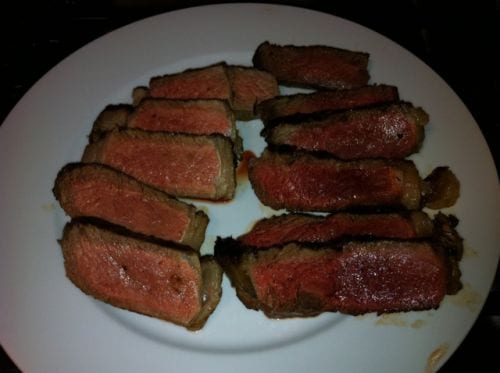 Then I set to work on the sauce as this rests in a warm oven. I described the process here. In this case, I added about a half cup red wine to the pan (without draining), deglazed, reduced to a syrup, added about 2/3 cup or so of beef stock, reduced, and finished it with about 1/4 tsp of potato starch in a cold beef stock slurry to thicken. 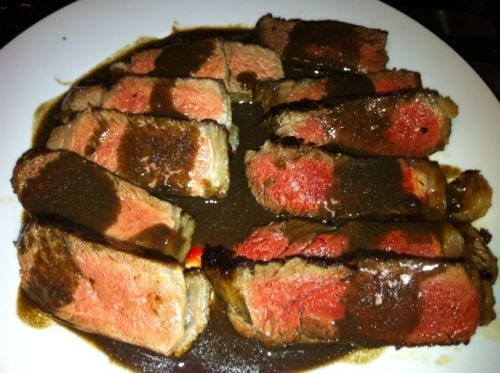 In the end, zero spices or seasonings were required. Not even salt or pepper.