A Year of Free the Animal Visitor Statistics in Review

A commenter a while back asked me why I cared about my blog stats. This, when I was reeling from all the traffic in January from links from various high traffic sites like Boing Boing and Gizmodo.

In my reply to that comment I explained that the stats are merely an indication that paleo is catching on. I also could have said that I care because I can. That is, because I have the high traffic to care about. But I also think that in addition being an obvious sign that things paleo are catching on, it can also be taken to mean that there’s a convergence going on. It’s not just paleo, but Primal and Evolutionary fitness and also of various low-carb approaches and the Real Food movement in general, typified by the Weston A. Price folks. And also keep in mind the three books published in 2010: The Primal Blueprint, The Paleo Solution, and The New Evolution Diet. Wow, big year!

So let’s take a look at the numbers and you can judge for yourselves. 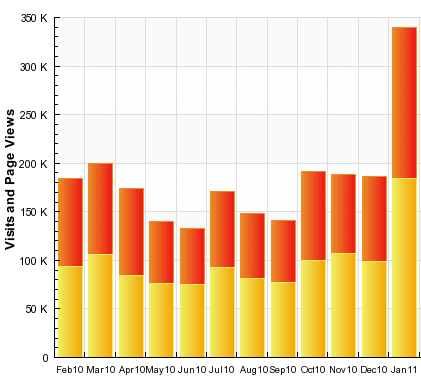 The issue, of course, is keeping as many around to achieve their own results, get involved, and spread the word. So I guess I better get busy.