A mixed bag of dishonesty and fraud

You’ve seen me poke fun at the monkey enviers before — though monkeys don’t have bananas delivered by the truckload — and this shall be no exception.

So one of the Vegan Menace shitheads (Durianrider of the 30 Bananas a Day crowd) goes and does just what you’d expect any shithead to do: takes a page from the dying, mainstream media playbook and does a hit piece on various well-known low-carb and Paleo diet advocates. It’s 22 minutes of pretty much pure rubbish.

Turns out, surprise surprise, that not everyone out there maintains a body fat percentage in the single digits. Of course, he picks & chooses "carefully" (that is, to support what I call lying by context). For instance, while the subject matter is "paleo," he includes a mixed bag of photos of various authorities in the field of diet and only one of them is actually a paleo advocate, Loren Cordain. The others are various low-carb, WAPF, and Zone advocates. And frankly, while I have always maintained that Cordain is a hero to the movement, his saturated fat phobia is very unpopular amongst most Paleos I know. The underlying dishonest and manipulative device is that he’s "exposing" paleo as something that will "make you fat" because the folks pictured aren’t ripped, instead sporting what could be considered average body composition for healthy men & women (~15-20% and 20-25% BF, respectively) who aren’t concerned with being ripped & shredded.

And while he does mention Mark Sisson of Mark’s Daily Apple and Sean Croxton of Underground Wellness, he includes no photo of Sisson and chooses a photo of Sean’s head only, drinking a beer. I found this photo of Sean in about 5 seconds. 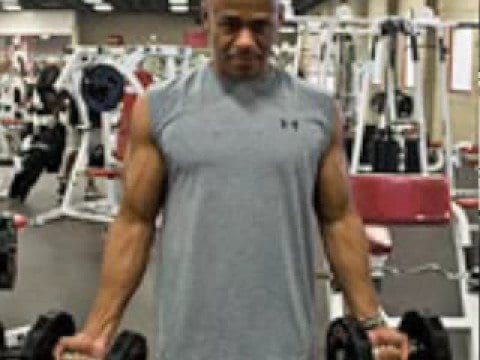 Here’s Sean’s take on the affair from his blog. An excerpt:

As usual, he cherry-picked his “overweight low-carb/Paleo” pictures and left out guys like Robb Wolf, Mark Sisson, Art Devany, and myself, who can certainly get our Chippendale on if we really wanted to. He even went so far as to leave a comment (posted below) accusing Mark of using HGH and Art of using steroids. This is utterly ridiculous and defamatory, in my opinion. It’s as if all fit meat eaters over 50 are juicing (and not the kind with the fruits and veggies).

And just go to MDA to see many photos of a ripped, washboard abs Mark Sisson. And how about all the various Crossfit websites all over the net, most of which have photos of clients? Where are the photos of those paleo adherents?

So that was the first part. The second part involves criticizing these folks (primarily Sisson) for their lack of "dietary purity," i.e., for incorporating things like coffee, wine, dark chocolate, protein powder, canned sardines, fish oil caps, etc. Well, individually, anyone can take paleo as pure as they’d like and a lot go pretty pure. I commend them on their individual choice, approach and ultimately success in finding what works for them, combined with the level of commitment they’re individually comfortable with. After all, in self-experimenting and seeing the results in themselves — results as are demonstrated continually on my Real Results pages and Sisson’s Success Stories pages — they have become authorities in themselves and on themselves. How it is that some vegan shithead knows what’s best for them?

Now, I happen to be an FOS (friend of Sisson). We’ve spoken on the phone many times about this whole paleo / Primal thingy and so I know first hand what Mark is up to: maximum inclusiveness. He knows very well that in promoting his 80/20 rule (80% compliant, 20% a mixed bag of non-paleo/primal or "cheats") that he casts the widest possible net for those who are simply never going to make it if all they can do is source local grassfed and pastured animal products, local organic vegetables & fruits, exclude all dairy, and drink only water. Hats off to anyone who makes those choices for themselves and it may even be optimal for most to go that way, but I for one think that every percentage point of purity one strives for above 80-90% compliance ushers in increasing levels of diminishing returns.

Face it, if you’re going to operate a paleo blog or consult clients and insist that supermarket meat is "poison," that a trip to Mc Donald’s now and then is going to kill you after it makes you very sick, you are going to have a very small audience. Fine, if that’s what you want, but then please don’t even imply that you are anywhere near as valuable to the general movement as a Mark Sisson. It’s simply not true in any context.

But we shouldn’t expect anything different from the vegan Menace. After all, the dietary part of it is only a front for the underlying ideology which, to sum it up, is essentially the hating of humanity for being human.

Vegetarians, and their Hezbollah-like splinter-faction, the vegans, are a persistent irritant to any chef worth a damn.

To me, life without veal stock, pork fat, sausage, organ meat, demi-glace, or even stinky cheese is a life not worth living.

Vegetarians are the enemy of everything good and decent in the human spirit, an affront to all I stand for, the pure enjoyment of food. The body, these waterheads imagine, is a temple that should not be polluted by animal protein. It’s healthier, they insist, though every vegetarian waiter I’ve worked with is brought down by any rumor of a cold.

The final part of this video takes dishonesty and manipulation in the other direction by showing various pictures of various "vegan" athletes with various degrees of impressive body composition. The thing is, I simply don’t believe it. If they’re claiming they got that way on a pure raw vegan diet, they’re lying. In manny photos, the lean mass pictured is simply impossible on a diet consisting primarily of fruit, as this particular sect of the vegan Menace advocates. Whether they’re getting the high protein needed for that level of lean mass from various powders or sneaking meat and other animal products when no one is looking I don’t know, but they’re getting it somehow.

Here’s the deal. It’s pretty hard to take a ripped and strong paleo and say, "yea, but you got that lean mass and strength from sneaking Mc Donald’s, pizza and Hot Pockets." It’s not necessary. Nor would it make any sense to say, "well, obviously, you’re a raw vegan and are lying about it. You can’t be eating lots of meat." But because of the profoundly unnatural way the vegan catechism works, the inverse does not hold true at all. It’s very easy for these ripped guys with substantial lean mass to claim they’re vegan (popularity mongers) and then chow down on meat & whey powder in the privacy of their own homes for even more popularity and guru status, especially for their primary prey: impressionable, irrationally exuberant young women with shriveled brian mass.

At any rate, here’s the vegan body compositions not shown on the video, to come full circle on the dishonest manipulation and scam of the thing, for the benefit of shriveled brains that just can’t know any better. Click for the full size version. 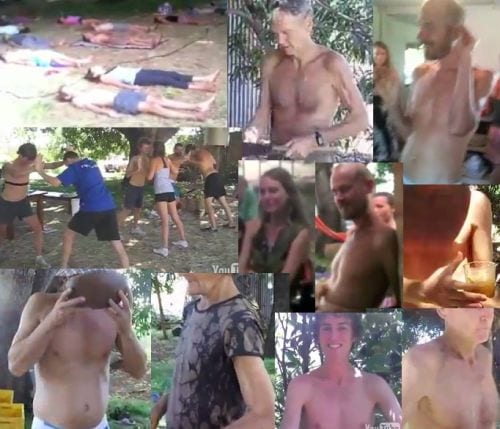 Many of you might recall where these clips came from when I poked fun at vegan elitists back here.

In the end, this is about dishonesty, manipulation, and downright fraud for the purpose of promoting an anti-human ideology. First you have their bullshit, easily exposed lies about how the human digestive tract is herbivorous, that meat rots in the gut, that we don’t have killing weapons as carnivores do (we have big brains; that’s our killing weapon, dumbshits), that vegan B12 deficiency doesn’t exist and is of no concern, and on and on. And even when they do acknowledge evolution as having some authority in the diet, it is to highlight various primates. Depending on which particular species of primate you’re talking about, divergence into hominoids happened from about 5-30 million years ago.

Paleos, on the other hand, are focussed on what happened once hominoids emerged and what drove that emergence. Most likely, it was the scavenging of carnivore kills. That is, just as we observe chimps killing and eating smaller primates today (and sometimes their own species) and using tools like sticks to dig and rocks to crush, these same crushing methods were probably used to get at the big-bone marrow and high-fat brains inside skulls…and the rest is history. Once these primates were able to access highly dense nutrition, a metabolically costly big gut became less and less necessary while a big brain became increasingly advantageous. So, to balance this out metabolically, according to both Kleiber’s Law and The Expensive Tissue Hypothesis, our primate ancestors’ guts shrank over millions of years and their brains grew such that hominoids emerged. Moreover, modern humans have the exact same metabolic rate, pound for pound, as any primate ancestor, but with inverse metabolic costs associated with guts and brains. Only evolution can account for this and only by the increasing access to high density animal nutrition — first from scavenging and eventually, cunning brains that could hunt, trap, and kill prey and then finally, cooking to extract even more nutrition from less food.

Simply stated, no longer did we need to sit about eating fucking bananas all day long. Durianrider in that video above boasts of eating up to 70 bananas a day (30 just isn’t enough, I guess). Now think about that. Assume he sleeps only an average of 6 hours per night, leaving 18. That means that during that time, he has to eat 4 bananas an hour, or one every 15 minutes — for 18 hours.

…Well, I told you he’s a dumbshit. He could get far more nutrition in two 15-30 minute sessions per day on good helpings of meat, fish and vegetables. Hey, go ahead and toss in a banana or two per day and leave the other 68 bananas for the 5-30 million year old evolutionary ancestors.

In the end, this is just pitiful. It’s so unscientific; hell, anti-scientific — to go right along with the anti-humanity. These people or, perhaps more accurately, retro-humans — WAY retro — must be feeling the pinch of the totally sensible and successful paleo movement. Hell, even Dr. Oz gets it mostly right. You’ve come a long way, baby!

Alright, now go get on those Facebook and Twitter buttons at the top and get to ruffling feathers partout!