I don’t know about you, but besides meatloaf & gravy, one of the classic comfort foods I’ve missed from time to time is Salisbury steak. So that’s what I put together last night, trying to make it as simple as possible. Still, I wouldn’t call it particularly modest and simple, as I’ve been blogging about in the food category lately.

I adapted this recipe in terms of both Paleoish as well as for one lb of (grassfed) ground beef instead of two. Of course, mainly it’s the breadcrumbs and flour for the roux that must go. The one ingredient I lacked was the mushrooms, so I went without that as well.

In place of fresh parsley, I used lots of dry to soak up some of the moisture. Still, the meat mixture was pretty doughy, so I employed a couple of other tricks. First, I formed the patties with a fork while still in the bowl. Then I gently slid them from the bowl to the pan. Second, I used an oversize glass lid to cover the pan. Excess moisture condenses on the lid and slides down and out of the pan. Clever. Be very careful not to have them break apart when you turn them.

The other mod was that instead of dumping the butter and tallow to begin anew for the gravy, I simply deglazed the pan with the existing fat with about 1/2 cup red wine and reduced that to a syrup before adding the beef stock, bringing it to a boil reducing by about 1/3 to concentrate flavor, and then about 1 tsp of potato starch in a slurry of cold stock to thicken. Then you return the patties to the gravy and into the oven it goes, 375 for 45. Click for the hi-res. 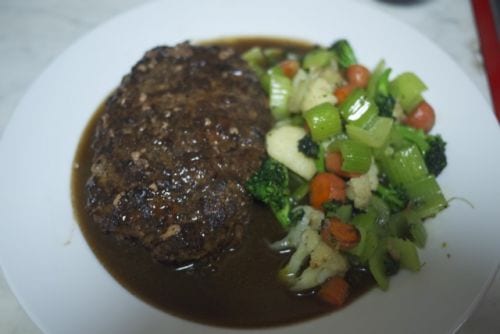 While it might have been nice to have some mashed taters, I knew very well that with the size of that burger and the fattiness of the sauce, that I’d probably feel like crap if I did, so it was some veggies stir fried in coconut oil instead. 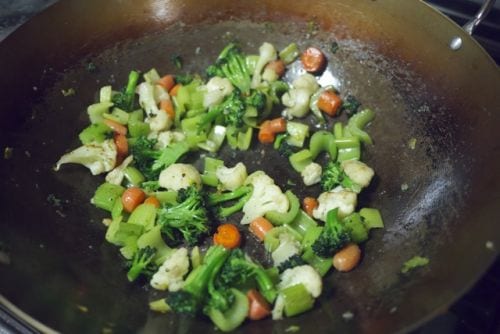 Turns out that was exactly the right call because I felt nice & full, very satisfied, and with none of the sluggishness that can happen if I combine too many potatoes with too big of a meal.