Do you have any real idea how easy it is for almost anyone to lose significant weight and improve their health, fitness and well being at the same time — all without ever going hungry unless desired? (And as many know from good-eating experience, sometimes you feel like a break after eating so much delicious food day in, day out.)

Take for example, one of the easiest things in the world to make: a beef brisket in the crock pot. Click for the hi-res image 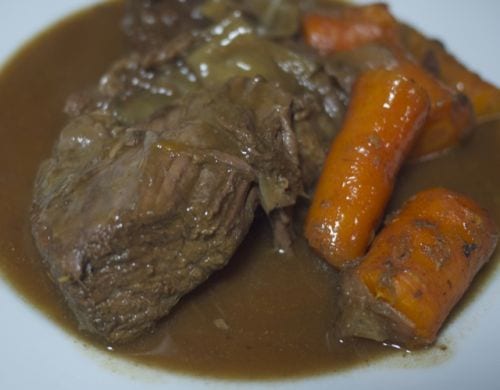 This was so easy that I tossed it in the crock totally frozen. I added about 1 cup beef stock, one onion chopped up, sprinkled a little garlic powder, some salt & pepper. This was about 10am. I set it on low and forgot about it; well, that is, until the smell began enticing me of the feast to come a few hours later. For the last couple of hours, toss in the carrots so they’ll be soft, but not mushy. Optional: pour off your broth at the end, put it to boil and thicken with 1/2 tsp or so of potato starch in a cold beef stock slurry.

…Hey, you Lean Cuisine and "Healthy" Choice eaters: how long since you spent an entire afternoon anticipating how wonderful and satisfying a meal was going to be? Oh yea, you do it all the time…well, sort of, because you’re really just fucking starving to death on your low-fat, nutritionally and calorically bankrupt crap-in-a-box.

You were lied to. A naturally fit, normal body is your birthright, just as it is for any animal so designed. Sacrifice and penance is not only an unnecessary, pernicious lie overshadowed by unearned guilt, but it delivers the exact opposite result for most people: it’s not the key to Heaven, but a Rocket Sled straight to Hell.

Reader Jon emails in this morning.

I’ve been following your blog since before Halloween. I made the decision around that time period to give the Paleo diet a go. I had some success previously with Dr. Gott’s No Flour, No Sugar diet. However, I still continued to struggle under that diet because I would eat large amounts of rice and corn (since I’m from Louisiana we tend to find rice in EVERYTHING). I have also engaged in a perpetual war against Coca-Cola. At my worst I would drink 2 liters of sugary soda everyday. I’m 29 and on two blood pressure meds as well as a cholesterol drug. I was 300 pounds and miserable. I wasn’t happy with myself and my reaching retirement age was in doubt.

I dove headfirst into Paleo by completely cutting out sodas and carbs. I’m not sure if it was an intense shock to the system but I didn’t experience the unpleasant withdrawals of earlier attempts to kick the Coke habit… Weight loss was slow at first but it didn’t take long before the pounds started to melt away. By Christmas I had lost twenty-five pounds and by Mardi Gras I was down to 265. A forty pound drop in weight had massive positive effects on my blood pressure, sleep habits, cholesterol (my doctor was shocked when she said my blood work checked out at 118 and I told her how many eggs I ate everyday and the frequency of red meat in the diet), and overall attitude. My feet don’t swell anymore and my complexion has improved. I have also found that the Paleo lifestyle is more forgiving when I indulge in a bowl of gumbo or a plate of jambalaya from time to time. The work that I have done does not totally collapse under the weight of complex and punitive diet regulations.

So here I am forty pounds lighter and Coca-Cola free for the first time in my life thanks to your inspiration. I value your informative and entertaining articles. And while we don’t see eye on spiritual matters, I appreciate your pursuit of the truth. You have a reader for life. I still have a ways to go before reaching my ideal body weight, but you’ve made the journey a rewarding and reachable goal.

Did you catch that? "I told her how many eggs I ate everyday and the frequency of red meat in the diet."

And his doctor was "shocked." Not congratulatory, not inquisitive, not questioning of the advice she’d given him all along and the drugs she prescribed that kept him at 300+ pounds.

Alright all you fence sitters? When are you going to stop playing the poor ignorant fool to the "shocked" masses of Doktors?

Take control of yourself by yourself and let your Twitter and Facebook peeps know where they can start to do the same.