Until two nights ago. Now, while the Sous-Vide Supreme is indeed a wonderful device, I just got out of the habit while firing up the grill last summer; then a move in September and not having taken the time to figure how I was going to integrate it into my kitchen setup and…excuses, excuses…I just didn’t get to it. But as always happens with me I can be indifferent to something for months on end and then one day, for no apparent reason, become just as obsessed as I had been indifferent. Perhaps I’m ADD-OCD: I get bored with obsessions and move quickly onto the next.

In terms of sous vide cooking, I’ve not done a huge lot of it but what I like best about it is the way it magically transforms "the cheap meats." Chicken, pork chops, salmon…they all become quite different in terms of flavor and texture. I think my favorite, however, is pork chops; so that’s what I did for this revival. Same basic procedure as in that link, i.e., 131F for an hour, then torch ’em. I went an extra 10 minutes, allowing for the frenched bone. These were from my meat CSA, so pastured. A bit leaner, they were, but pink inside while being fully cooked and very tasty. Click on the images for the hi-res versions. 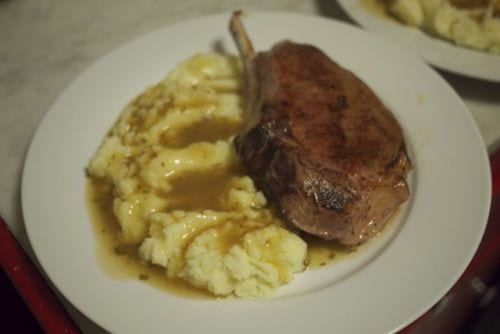 On the side was a simple mash of potatoes (mashed with melted butter and cream) with a white wine reduction, butter, a couple of pinches of tarragon (less is more, with tarragon), and chicken stock. This was the first time I did a white reduction the same way I do a red (search the blog for that) and I was surprised that it came out a bit bitter/sour. So, what the hell. …Close your eyes if you’re dogmatic, skip to the next paragraph, but I added 1/2 tsp of plain granulated sugar (we keep it around for guests, because I’m so dogmatic). It worked. Not all the way, but almost. Another 1/2 tsp did the trick for a total of 1 level tsp of sugar for two helpings.

Next up is a totally original recipe, only not with any measurements. I don’t really cook that way, being so paleo-dogmatic.

In this case, same pastured pork chops as above, which I first browned in the cast iron with a bit of lard. Then I transferred them to the crock pot, on high, lid off, and added just enough chicken stock so they were about 2/3 covered — until the stock was almost evaporated.

in the meantime I took some broccoli, some cauliflower and celery and pulsed it in the food processor until finely cut up.

Then I tossed it all in the crock, added coconut milk until just covered, and not too much Thai green curry, maybe a level tablespoon. It’s enough, but not too much. I wanted the veggie flavor, too. I left it on high, covered, and let it go until done, perhaps a coupla hours. You’ll know. Again, click for quality. 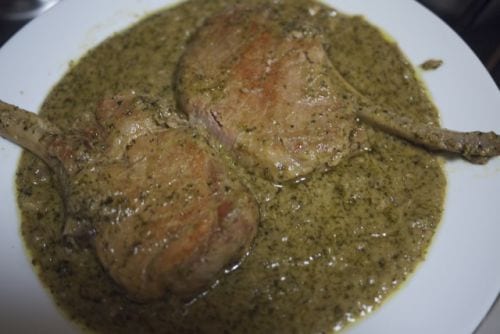 There are innumerable ways to cook pork — shoulders, roasts, chops and on and on. A very versatile, economical meat and while I’ve not looked into it in detail, I understand that pigs are quite omnivorous, like humans, and that their meat is one of the closest non-human animal meats to that of humans.

So, it’s like cannibalism…if you’re into that. It’s sure that many of us are, though not in a hurtful way, if ya get what I mean. 🙂

Cook well, folks. Take the time and effort. You can encourage your friends & family. Life is not the sacrifice the grain and sugar sellers and their government bedfellow whores would have you believe. Share it. Buttons up top.