And why shouldn’t he? Tell me again how the food giants were there for him. How about his friends, who told him, most likely: "everything in moderation?" The drug companies? The media? How about academia and research institutions with with their CAFOs of Grant Whores?

Nobody was there for Kit Perkins who was supposed to be there — who one might expect to be there — and consequently, at the tender age of 21, Kit ends up looking like this. But I suppose that looks pretty average to most folks in our increasingly acclimated society. 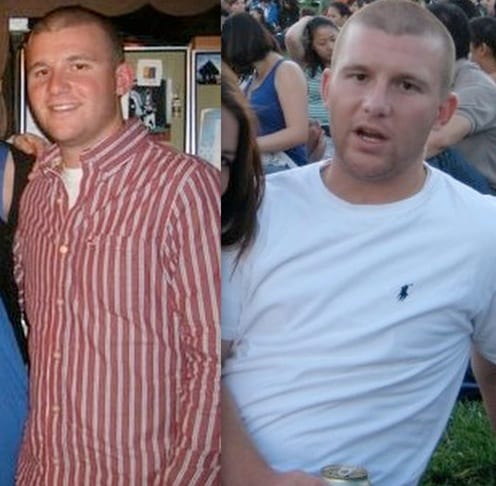 When I went to college, my focus shifted to academics and social matters, and before long I had stopped exercising completely. I didn’t realize it at the time, but I was headed down a risky road in a poorly maintained vehicle.

My junior year in college, the wheels fell off. Mounting personal issues, paired with a heavy load of engineering coursework, resulted in severe stress, and my friends and I medicated with beer and video games. I became more sedentary, slept less, and was constantly worrying about one thing or another. My lifestyle led to significant weight gain, and by the summer, I was at 200lbs with very little muscle on my 5’10” frame.

What I think is that Kit was very fortunate to head down this path very early in life. For me, I was always pretty reasonable in body composition until the latter half of my 30s, then dind’t do anything about it for 10 years until I found myself at 235lbs on that same, 5’10" frame.

But while I don’t think the paleo mileu mandates a low carb approach, it can certainly be effective for the initial weight loss.

I moved back in with my parents and was set to take a few quarters off from school for an internship in the bay area. The week I was set to start work, the company all but went under and I was stuck with nine free months and no job. Suddenly I lacked purpose and began doubting my self-worth.

Salvation came in the form of pick-up hockey and home cooking. My parents had been low-carb for years (my brother and I complained for years about the bacon smell originating from the seemingly unhealthy diet), and though I didn’t realize it at the time, I’m sure my carbohydrate intake dropped significantly during this time period. I was lucky enough to find another job, and spent the remainder of my time at home working and playing hockey 2-5 times per week.

I lost roughly 40 lbs during my stay at home. I looked better, felt better, and regained the confidence and sense of self-worth I had lost.

And then he went back on his own. Oh, oh.

I returned to school last March, determined to maintain my rediscovered health (and waistline). Shopping for myself again, I ate nothing but salads and pasta. School limited hockey to once per week, so I started jogging and mountain biking. I watched my portions and used low-fat pasta sauce and salad dressing.

Over three months, I gained almost ten pounds. My new clothes were getting tighter, I was losing stamina on the rink, and I was hungry after every meal. It didn’t make any sense. This was the first attempt I had made at watching my diet and I was exercising more, but I felt worse and was gaining fat. Now I realize I was starving and getting fat at the same time.

Yes, I know: calories count. Or so they say. Lots of controversy about that and who knows if it will ever be resolved; so until then, I think I’ll just stick with reader and commenter Nigel Kinbrum’s adage: "calories count, but why bother counting?" It just seems that for me and a lot of others, we felt the most hungry when gaining fat and the most satiated while losing fat.

This also illustrates the inherent limitations with the low-carb dietary approach. Does it work? Absolutely, very effectively for most, but in so many cases, only to a point, and that point is not the leanness and muscular strength retention — and even increase — you see in paleo folks. Why? Well, because low-carb is sort of a license to eat easy crap. paleo excludes easy crap in favor of real food: meat, fish, fowl, vegetables, fruits, and maybe nuts & dairy if it works for you. Chiefly, exclude all wheat (and other gluten grains or grains in general), refined sugar, and anything with former industrial lubricants: vegetable and seed oils.

Let’s see how that worked out for Kit.

I went home for a week in June before starting summer school, and my dad was in great shape. He told me he had been eating a “paleo diet.” He pointed me to Mark’s Daily Apple, Robb Wolf, and Free the Animal; I was off and running. I bought The Primal Blueprint, and the science of insulin management struck a chord with me. I looked back at the cycles of body composition I had experienced in my young life, and it seemed to hold true – carbohydrate was a problem.

I scheduled my birthday at the end of July for a last Neolithic hurrah, then embarked on a low-carb paleo/primal lifestyle on 8/2/10. For the first six weeks, I tracked my dietary intake and body weight, and wrote a post every day on a blog constructed for that purpose (now indexed here).

Maybe the carbohydrate was a problem, maybe it wasn’t, but the point is, taking a Paleo/Primal approach does two things: first and foremost in my view it eliminates Dr. kurt harris’ "Neolithic agents of disease." Second, it is typically, at most, moderate carb.

The story gets better, as expected.

In those six weeks, I lost 13.6lbs, and got my abs back. I had boundless energy and no crippling hunger. It was easy to get out of bed every morning, and I found I actually enjoy cooking when the food tastes good. I was actually excited to see people I hadn’t in awhile, instead of embarrassed to show my added pounds. For the first time since high school, I craved activity. Suddenly, the couch wasn’t enough for me; I wanted to be enjoying the sunshine and challenging myself athletically.

This lifestyle has also had the unexpected, but certainly welcome effect of lowering my stress. I used to worry about everything. I’m not sure how it happened, but now I am an expert at letting it go; I truly release the stress of everyday issues from my body and mind. Perhaps it is because I feel confident in my health in a way I never have before.

The paleo/primal diet has been like a drug for me. I can’t get enough of the science of nutrition and diet; I’m constantly thinking about how the body works. Since those first six weeks, I’ve been experimenting with my health and fitness, all on a strong paleo base. Most recently I’ve been experimenting with Leangains and I’ve added quite a bit of muscle. In addition to this passion for knowledge, I developed a love for writing, a rare romance for an engineer. 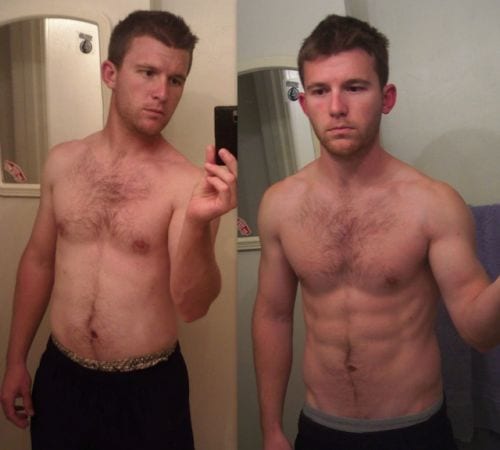 Do make sure you take a scroll up to see the before shots. [Update: Kit emails in that, "I didn’t notice this until now, but the lefthand picture in the two "after" pics is actually sort of a middle pic – after living with my parents, but before really going paleo/primal."]

I thought it would be a good time to post something like this owing to the higher visits the last few days, probably as a result of the debate with raw vegan frutarian Harley Johnstone of 30 Bananas a Day. They seem to think that meat makes you fat. In science, the above is what you call falsification of that hypothesis. The cool thing about Popperian falsification is that it only takes one single instance to know you need not consider it any further. Translation: PLONK!

And for you new visitors, vegan visitors, this is no fluke. Check out Tim. Or, this "Sterling" transformation. Who hasn’t heard of Super Mike? And Chris? He’s singing a different tune. Murray to this day constitutes one of the most amazing transformations ever. Anyone remember how Austin in Singapore turned his life around? And how about Michelle and Timothy?

And finally, one of the most recent, Mel, a PhD biology researcher. All of the resources at her disposal and yet, she had to come to some guy’s blog to find a sound path for living and looking the way a human animal is supposed to look.

You likee? Then shout it to the mountain tops. Let others know, because they don’t know. Facebook and Twitter buttons are up top. Just do it.