I increasingly have difficulties answering emails from readers in a timely fashion unless they just happen to to hit me at the right moment with something apropos to what I happen to be up to or thinking about. I always love the progress stories and photos and those always go into a file for possible use.

I hate not getting back to people at all, even though I read every email. So, as a compromise I’m going to take some of those most appropriate from time to time and just include them in a post. Often they offer info and insight, sometimes to plug a decent product or service and sometimes it’s just whatever.

~ I hear about you a lot through Marks Daily Apple – I think what you’ve done with your life and what you’re doing to help others is awesome. I, too, follow a Paleo/Primal lifestyle and I’ve made it my career, too: I’m a nutrition therapist with a Paleo bent and I’m the blogger for Paleo Plan (www.paleoplan.com), which is a Paleo meal planning subscription site.

Anyway, the reason I’m emailing is that I’d love it if you’d look the website over and if you like it, put it up on your website in the list of blogs/sites. Even better than that, though, it’d be awesome if you’d do a review of the paleo Plan. The service provides recipes (free on the site) organized into a meal plan every week (each week’s menu is different) and a modifiable grocery list to accompany it. If you wanted, we could give you access to the meal plan and grocery list for a week, you could follow it and tell your readers what you think? I think it’s a service that a lot of people could benefit from – we’re just trying to get the word out.

[Looks to me like a worthwhile service. I’ll let the proprietor know about this post. While I don’t have the cycles to do a review and do fine in my own meal planning, perhaps he’ll have some promotional ideas.]

~ I have a real life study for you! My wife came from Thailand 5 years ago, cooking with palm oil and coconut oil only (just asked her if that’s true and she confirmed). After she came here she seeks and makes the exact same food with friends but the only thing she changed was that palm and coconut oil is sort of banned here in order to “protect the people of Norway from heart attack.” Canola, soy and even olive oil has been the substitute and she haven’t even questioned it since the Thais haven’t had the same problem with the western style of eating.

What happens with my wife is nothing but spectacular seen from a western man’s poor eyes. She gains 20 pounds without knowing what struck her! She has tried many times but with no success to lose the excess weight.

Today I introduced butter, I threw away the canola and soy. I am convinced that something Is seriously wrong with the way we eat. What do you think?

[There is a growing and I think valid notion that excess n-6 may just be the worst of the "neolithic agents of disease." For myself, while I don’t have any of that stuff in the house except olive oil, I do eat at restaurants a lot. I intend to redouble my efforts to avoid.]

~ I shut down the survey just a few minutes ago. It was a pretty good run, with around 2,600 entries on just the first day! In all, there are 6,104 entries, but with quite a few incompletes or abandoned entries (~500). That puts the effective population size at around 5,500.

I copied down every bit of feedback on the survey, and will be doing a write up on the methodology and proposed mechanisms for improving the survey design. I’m fairly sure I’ll do a follow up survey next year.

[If you recall taking the Paleo Survey, you can see the results here, and feel free to discuss implications in comments. Two pleasant surprises for me: this is not a man’s game, but it’s a pretty young game, both of which bode well for the future.]

~ Just wanted to pass on how your particular flavor of paleo has been working out for me. I’ve been mostly eating beef, carrots, potatoes, oranges, dairy, and eggs since about Chirstmas time. I didn’t think I was much fatter then than I am now, I just have a little bit of a belly. However, my Mom saw me a few weeks ago and said "where did your butt go???" She said that my butt is about half the size it was at Christmas time. I thought she was exagerating at first, but then I realized that the jeans I was wearing were barely even button-able when I got them for Christmas, and yet now I’m wearing them with a belt! She was highly skeptical about paleo because she is a certified dietary manager and had to drink mass amounts of western diet kool aide. When she saw my results she finally gave in, and now she is doing paleo as well. As a matter of fact I just visited her this weekend, and she can’t tell me enough about how much healthier she feels and how her appetite has reduced. We made a quiche together with almond flour crust and it turned out very well.

Anyway, just wanted to share the positive improvements I’ve had with you, thank you for all your work spreading the word out! … I forgot to tell you the most important part of this story! I used to follow the FDA food pyramid religiously, and all through my teens my doctors told me that I had dangerously high cholesterol and blood pressure. In fact, just 2 years ago I was told at a check up that if my cholesterol was much higher, the doctor would have "called an ambulance". Fast forward to last week, I go for a check up, and I return a week later for my blood test results. My doctor told me, in his words "all your levels look great. Whatever you’re doing, keep doing it." 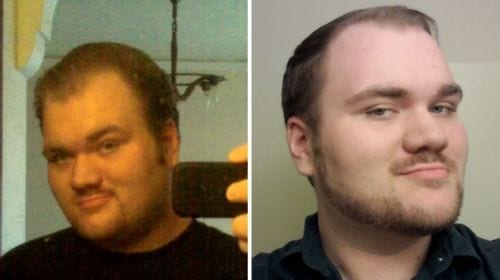 [Needless to say, a hearty congratulations to Ian, and to his mom, and plenty of encouragement to stick with it.]

END_OF_DOCUMENT_TOKEN_TO_BE_REPLACED

I have too much food backlog stuff and being creative, I want to put it out there, perhaps help some of the fine eating establishments here in south ...