Two of the things I attempted to get across in last Thursday evening’s raw vegan debate were that:

So here’s last night’s meal to illustrate. We began with some sushi; a piece each of maguro (tuna), sake (salmon) and hamachi (yellowtail). That went along with a dollop of cooked white rice for each. Click images for the high-res versions. 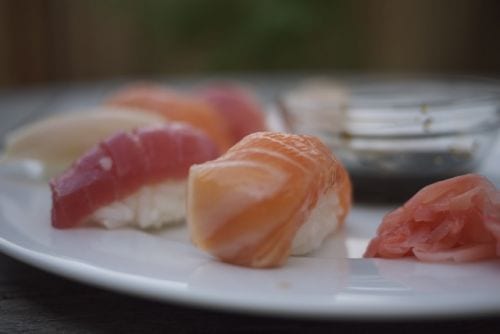 For the main course I had been thinking of a way to enjoy something along the lines of one of my favorites of all time — a French dip sandwich — without resorting to baking some sort of “bread” with the various things many folks use such as coconut flour and almond meal.

There are a couple of ways to prepare a French dip sandwich in terms of the meat. One way is to have nice, pink, medium rare slices that are then dipped into the beef broth. The other way, my preferred way, is to use as little broth as possible and then simmer the meat in the broth. Yes, this gets the meat well done, but it’s infused with more intense flavor and as well, the broth is concentrated & beefy. I also had some chopped onion in there. When done, I strained the meat and chopped it up with some raw fresh spinach leaves and then used raw & fresh butter lettuce as the delivery device. 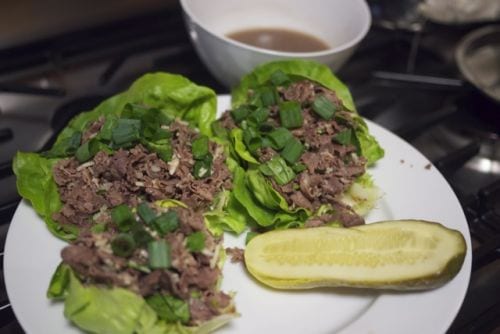 Some raw green onions and a snappy Nathan’s dill pickle rounded things out. And of course, you lose some of the beef and the green onions into the broth in the process of dipping, but not to worry: you then have a wonderfully tasting and nutritious chunky soup to drink down when done.

I won’t bother to do a nutritional profile on all the above, but you intuitively know it’s a powerhouse that no strictly raw plant meal can touch, especially in terms of weight and bulk.