Well, the debate I blogged about earlier is finally on. It’s a live event that will take place one week from today, Thursday, April 14, 2011 at 18:00 PST. It’s being hosted by Steven Prussak of Raw Vegan Radio, and after doing a bit of checking around, I’m convinced Steve is honorable, cares, is as professionally objective as is reasonable to be (we’re all biased), and really wants to put on a good and informative show for meaties and veggies alike. 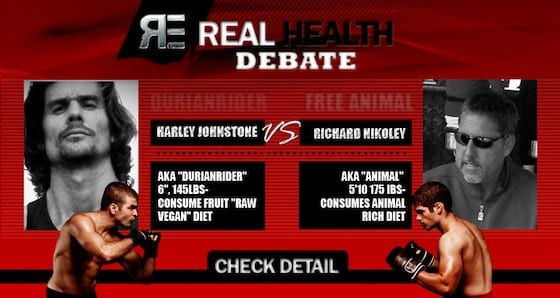 Here’s where you sign up in order to listen live.

If for some reason you can’t listen live or should otherwise want a recording and transcript, that’s available here.

OK, so it may not escape your notice that Harley’s mean look pretty much fills up the whole space whereas, mine looks a little diminutive by comparison. Perhaps Steve’s designer is a vegan. So let’s set the record straight. That photo of me is two years old, now. Here’s what Harley actually looks like now, clips from recent videos. 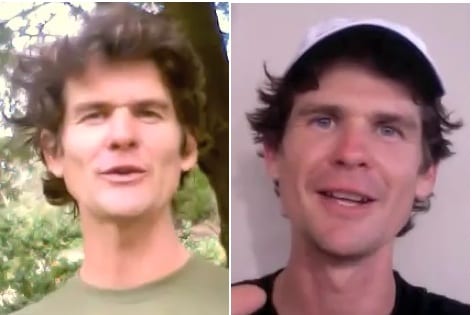 There’s more here at Julianne’s nutritional analysis of his diet. Additionally, I was curious to look into the appearance of the raw fruit vegan Harley subscribes to, Doug Graham, a chiropractor if I’m not mistaken. It’s hard to know when photos on the net were actually taken so the best way is to take it from a video of some event that has a date attached to it. So here’s Doug Graham in 2005 on the left, and four years later, 2009, on the right. A recent workout video calls him "57 years young." So, to the left he’d be 51 and to the right, 55. 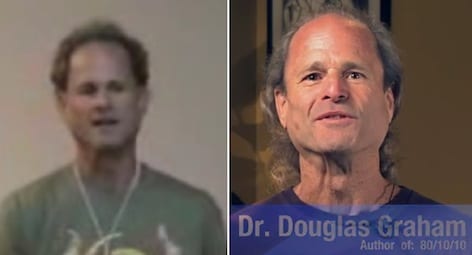 I turned 50 just over 2 months ago and this is me from July and August this last summer. I sure hope I don’t look like that in five years. 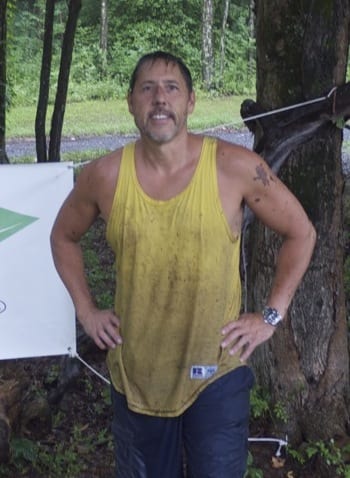 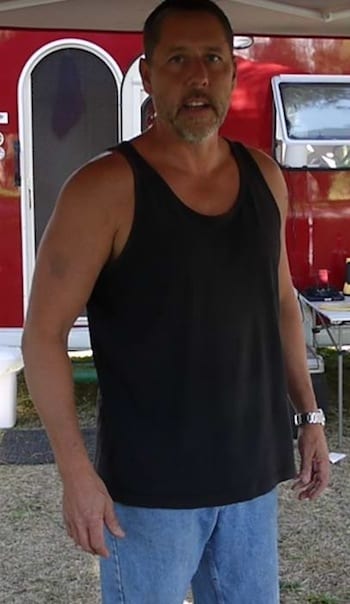 Let’s predict what Durianrider looks like by the time he’s 50. I don’t think he can afford for his neck to get any scrawnier, given what he appears to have lost already. At any rate, this debate is going to be pretty easy if he comes equipped with asinine bullshit like this below, (and that he’s probably too ignorant to understand the inanity of in the first place).

Update: While normally I wouldn’t put up a link to a website ranked 1.3 millionth in the world where I’m ranked 87 thousandth in the world and 36K in the US, what the hell? So here’s Harley’s post about the debate.

The only person from the low carb, high fat camp that had the guts to do a debate with me was Richard Nokely. Mark Sisson, Sean Croxton, David Wolfe, Daniel Vitalis and Sally Fallon all said ‘No way!’. I dont blame em either!

Occam’s Razor alert. The explanation with the fewest assumptions is usually the correct one. Since all the above have been in debates before, have put themselves out there, it seems dubious to assume they’re afraid of Durianrider. More likely, they simply don’t consider it worthy of their time.

I, on the other hand, simply wish to give the guy with a puny following and invisible blog a sporting leg up. It’s very charitable of me.

I get the sense that Harley somehow thinks that by debating me he’s getting all the others by proxy. Well, I speak for myself, I speak for the unassailable science, I speak for my own results after damaging my metabolism for 47 years and losing 60+ pounds, and I speak to the impressive results other similarly situated folks have attained.

And speaking of Sisson, here’s how Paleo leaning and getting strong goes without coming out the other end with abs, but otherwise, a body that looks like an emaciated teenage girl. Plenty more examples here.

Update 2: Any former 30 Bananas a Day adherents who had a bad experience with the raw fruit diet, or former raw vegans in general who wish to relate their experiences to me, please feel free to contact me in email, which is on the About page. I won’t use your last name unless you explicitly give permission to do so.

By the way, please do spread the word about the debate on Twitter, Facebook and even in the comment sections of other health and fitness websites.