Another 100% Raw Vegan Success
The Individually Optimal Diet: Piss Everyone Off

Hope you all had a great long weekend, as did I. I didn’t read a lick of diet, fitness & health "crap," instead spending most of the time outdoors — in the sun when available — eating well, drinking well, and reading some classic fiction for a change (Heinlein, if you must know).

I’ve been eating more fruit, lately, have been enjoying it, and might just continue to do that. For one, it’s pretty self limiting for me. Since I’m typically eating it in conjunction with something else — such as with eggs and a breakfast meat, or perhaps after a meal as a surrogate for "dessert " — it’s rarely huge. In no way am I eating the pounds of it the raw vegan fruitarians do. And no, I haven’t bothered with sticking pins and needles in my fingers to make sure that feeling normal and good after eating a few helpings of fruit is not "spiking" my blood sugar and insulin. It may be. Don’t know — probably is a bit — don’t care.

…I should probably post on that too, one of these days, but to bottom line it: acute spikes in blood glucose and subsequently, insulin, in healthy people, constitute a perfectly normal physiological cause/effect. The problem is with chronically raised blood sugar and consequent chronically elevated fasting insulin. The latter is insulin resistance and the former is normal.

So once I got back into the swing of reading everything I’d  missed over the last few days I was quickly led to yet another Denise Minger masterpiece: Wild and Ancient Fruit: Is it Really Small, Bitter, and Low in Sugar? Uh, in a 4-letter word, fuck no. 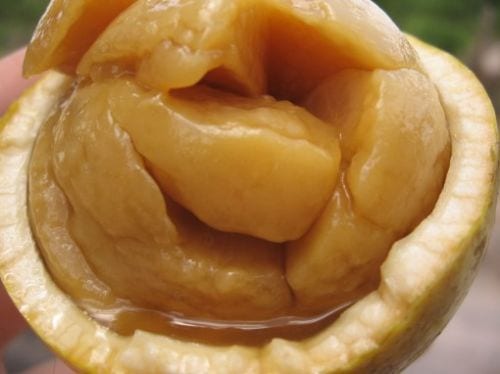 Sure looks "fibrous, small, and tart" to me. Here’s Denise:

Contrary to popular belief, wild fruit—including the stuff we would’ve had access to during our evolution—is not necessarily any of the above. In fact, it can be bigger, tastier, and sweeter than anything you’ll ever find in the aisles of your grocery store.

Fruit is decidedly sparser once you get out of the tropics, but considering we were stationed in Africa until about 50,000 years ago, the flora of a backyard in Michigan might not be a great reflection of the plant life we encountered for the majority of our evolution. As a result, comparisons of cold-climate fruits to their wild ancestors (for instance, a Red Delicious versus a crab apple) tend to be misleading, and tropical fruits may offer more insight. Although we’ll probably never get a clear picture of the exact fruits available to early humans, we can look at the wild fruits growing today to get an idea of what nature is capable of producing on its own.

There’s a great book called “Lost Crops of Africa” (readable online) that has a brilliant section on wild fruit. The authors start by describing the vastness of Africa’s wild fruit supply:

Most of Africa’s edible native fruits are wild. One compilation lists over 1000 different species from 85 botanical families and even that assessment is probably incomplete. Among all those fruit-bearing plants, many of the individual specimens growing within Africa are sheltered and protected, some are even carefully tended, but few have been selected to bring out their best qualities, let alone deliberately cultivated or maintained through generations. They remain untamed. … Africa’s wild-fruit wealth is essentially unknown to science.

I won’t steal any more of her thunder or marvelous images of delectable looking fruit. Go check out the post.

As to connecting a dot or two, I always find it interesting that as soon as I begin to question something or even become more aware of an issue and begin to ponder, it’s never long until something comes along to grab my attention. In this case, first thing this morning: The effect of two energy-restricted diets, a low-fructose diet versus a moderate natural fructose diet, on weight loss and metabolic syndrome parameters: a randomized controlled trial. (via @chrismasterjohn)

One of the proposed causes of obesity and metabolic syndrome is the excessive intake of products containing added sugars, in particular, fructose. Although the ability of excessive intake of fructose to induce metabolic syndrome is mounting, to date, no study has addressed whether a diet specifically lowering fructose but not total carbohydrates can reduce features of metabolic syndrome. A total of 131 patients were randomized to compare the short-term effects of 2 energy-restricted diets-a low-fructose diet vs a moderate natural fructose diet-on weight loss and metabolic syndrome parameters. Patients were randomized to receive 1500, 1800, or 2000 cal diets according to sex, age, and height. Because natural fructose might be differently absorbed compared with fructose from added sugars, we randomized obese subjects to either a low-fructose diet (<20 g/d) or a moderate-fructose diet with natural fruit supplements (50-70 g/d) and compared the effects of both diets on the primary outcome of weight loss in a 6-week follow-up period. Blood pressure, lipid profile, serum glucose, insulin resistance, uric acid, soluble intercellular adhesion molecule-1, and quality of life scores were included as secondary outcomes. One hundred two (78%) of the 131 participants were women, mean age was 38.8 ± 8.8 years, and the mean body mass index was 32.4 ± 4.5 kg/m(2). Each intervention diet was associated with significant weight loss compared with baseline. Weight loss was higher in the moderate natural fructose group (4.19 ± 0.30 kg) than the low-fructose group (2.83 ± 0.29 kg) (P = .0016). Compared with baseline, each intervention diet was associated with significant improvement in secondary outcomes. Reduction of energy and added fructose intake may represent an important therapeutic target to reduce the frequency of obesity and diabetes. For weight loss achievement, an energy-restricted moderate natural fructose diet was superior to a low-fructose diet. [emphasis added]

According to subsequent Tweets by Chris, this was apparently grains vs. fruit, so I guess you can take it with a grain of salt, too. But I think the wider and more general point to take is that a level of natural, real food fructose of ~60 grams per day was not harmful. A medium raw apple has about 10g of fructose, so you’re talking the equivalent of about a half dozen apples per day. A banana is about 6g, so ten of those (source: nutritiondata.com). For me, that’s more fruit than I would almost ever eat, except the once or twice per year I’ll eat a whole watermelon (150g fructose) or a couple of pounds of ripe bing cherries in season (50g fructose). You might take note that a coupla 12-16 ounce flavored sugar water drinks (they euphemistically call them Coke & Pepsi) per day get’s you in that 50-70g fructose range. And without benefit, if it exists, of fiber — but that’s nature’s way of delivering fructose, normally. No fruit for you!

But here’s why I’d not been much interested to blog lately, and then jumped on this with gusto this morning: we’re learning. What are we learning? Well…this just in via email from Chris Masterjohn, with his take on the full text of the study (with permission to quote him).

Both groups eliminated "added sugars from processed fruit juices and punch; sugar-sweetened soft drinks and beverages; and bakery products such as pies, cakes, strudels, doughnuts, and cookies, in addition to dairy dessert, chocolate, candy, and dried fruits." Members of both groups were overweight, reduced their calories based on a formula that took into account their age, sex, and height. Both diets were 55 percent carbohydrate. One group restricted total fructose to 20 grams per day, while the other group only restricted fructose to 50-70 grams per day, consuming roughly 30 percent of their calories as fruit. The low-fructose group primarily ate cereal grains in the place of fruit. The group eating more fruit rather than grains had a statistically significantly greater loss of weight, and had a somewhat greater loss of fat and somewhat greater improvements in blood glucose and insulin sensitivity, which approached but did not quite reach statistical significance. Ultimately what this study shows is that, over the course of six weeks, fruit produces better weight loss than cereal grains.

Unfortunately, the study did not include a group that continued eating added sweeteners and junk food, so there is no way to determine the effect of eliminating these foods and to distinguish it from the effects of caloric restriction or other confounders that are naturally present with enrollment in a study. Ideally, we would have liked to see the study include groups eating "paleo" safe starches or low-carb diets so we could make those comparisons as well.

Overall, the good news that comes with this study is not the rather small increase in knowledge about the short-term clinical effects of fresh fruit compared to grains, but rather the clear indication that some researchers are well aware of the need to study the effects of natural fruits and take them into account when studying "fructose." This means we should see more and more evidence in the future that can clarify just what the role of fresh fruits are in a healthy diet.

Yea, this came in (because of a Tweet I sent him) just as I was about to write, in summation, that it’s not about carbohydrates and now, apparently, not even about fructose. What it seems to me to be shaping up to is that real, whole foods that you get yourself and "process" yourself, with care and love is really the fundamental key. Yes, I do understand that some people are going to do well or better on very low carb intake, either because of insulin resistance (Type II Diabetes) or because of a significantly compromised metabolism over decades of abuse. I’m very quickly dismissing the notion that low carb is essential for more than a small minority and I think eating a reasonable amount of fruit will be fine, perhaps beneficial, for the large majority.

In a subsequent post soon I am going to address — head on — the issue of "individual optimality." Hopefully, we’ve dispensed with the notion that there is any such thing as optimal for any large group and certainly not, an entire population.

Tired of dogma, from all stripes & corners? Then energize the thing. Let’s go. Like & Tweet buttons have been provided up top for your convenience.