~ Wow do I ever like all of the health and fitness podcast guys out there, and have thoroughly enjoyed each and every interview I’ve done. And also, with so much going on lately in Paleoland, everything shiny and new doesn’t always show up on my radar right away; or, if it does, it often takes weeks or even months for me to call forth the alert aircraft to go investigate. Well, in this case, Angelo Coppola (seriously, go check out those before & after pics) came to me and I have taken serious notice…no, very serious notice.

This Week in Paleo is a blog and a weekly podcast (iTunes). At the intersection of scientific evidence and evolutionary clues left to us by our ancestors, the paleo Diet and Lifestyle is a unique approach to nutrition and fitness. [emphasis added]

The second reason to take Angelo very seriously is that the production value of his free podcast is absolutely astonishing in my view. Not only is Angelo very polished and professional behind the microphone, but the sound quality, the music, the audio clips, the transitions…well, everything is as though you are listening to something coming from a multi-millon dollar sound studio complete with a host under contract for millions, and a team of engineers and producers to make things happen. As I gather, this began as "This Week in Paleo" podcast and with about 20 shows in the can, it got picked up by the 5by5 network — no doubt in no small part due to the aforementioned production value.

So yes, Angelo contacted me a week or so ago to invite me on the show and as I gather, it will be for the duration, as we talk not only about what I’m up to and this blog, but also about various current events in Paleoland. I’m really looking forward to it. If anyone has specific topic suggestions feel free to drop them in comments. I believe it will be episode #17.

So, if you haven’t been listening to the programing, then you might want to get going. If you have been listening, then let other readers know what you think in the comments. Oh, and by the way, in episode 12, Angelo and frequent commenter here, J. Stanton, discuss The Real Health Debate beginning at about 28:00 into the program, audio clips of the debate and all. As I said, this guy is pro all the way.

~ Had to shovel about 4-5 inches of "global warming" — …oh, yea, it’s "climate change," now, such that anything and everything can be accounted for, just as with the religious "it’s God’s will" meme — off the deck this morning. Friday when we arrived here in Arnold about 2pm in the afternoon, we were sitting on the deck in shorts, in 75 degree sunshine, with no so much a flake of snow left on the ground anywhere. The latest I’ve seen snow up here — since we acquired this place about 8 years ago — was early April. It’s May 15, just over a month away from the summer solstice. 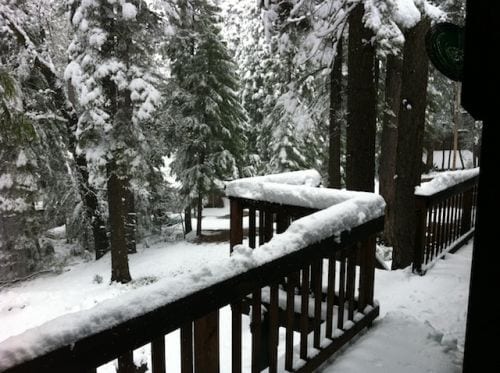 ~ Longtime readers are well aware of my penchant for bashing Hot Pockets as the sort of meta-touchstone for crap food. Well, a commenter on yesterday’s post came up with this Jim Gaffigan clips about…Hot Pockets. Funny.

~ Late Breaking Update: I hadn’t taken note that the trailer for In Search of The Perfect Human Diet, a documentary film by C.J. Hunt, which I’ve mentioned before and donated to, was actually a new promo and not the one that has been around for a couple of years. Take a look.

And help support the post-production if you can. This is just the anecdote needed for that T. Colin Campbell propaganda film, Forks over Knives.