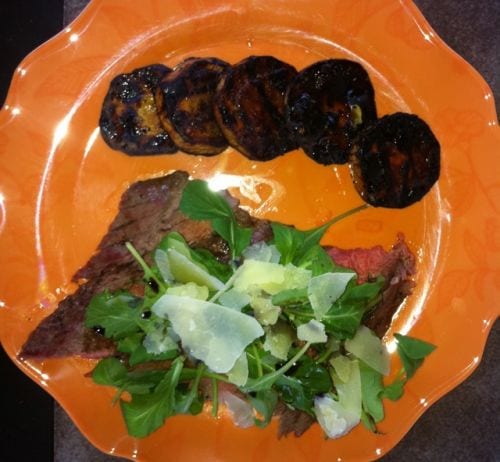 Click on the image for the hi-res. He describes:

So there you go. A very edible dish, I would say. I’d also say that Mike is a great cook. He’s also an accomplished brewmeister of many years, and he cures his own bacon, even.

What’s weird about blogging is that with the technology nowadays, one often connects with people from the way back, like decades ago…from college and shit, or even before. I often wonder how the rebuilding of bridges long burt is ultimately going to shape society. I’m pretty much a bridge burner. Out with the old, in with the new is what I always say. But…

It’s interesting to me because, way back when, people died only steps away from where they were born, often enough. And then, we migrated — that would be hunter-gatherers — and then we invented ships, plains and trains, and spread like flies over a continental ocean of shit. Perhaps there were letters, but face it, people had nearly no connection to “the old country” and, when Hans retired from the steel mill at 65, and he and the misses went back to the “old country” for a visit, it was, to him, a foreign land.

He had satisfied an urgent curiosity, but he never went back. And he still only talked about what he had always talked about: how much better was the country that he left, than the one he left it for. It’s almost like lovers. And that was always his schtick.

This is merely a couple paras written in contemplation of my own experience over the last couple of years as this blog has gained some attention. A very nice comment, from yesterday; Jasen:

Richard, I discovered your blog in my quest for weightloss and better health. Your site has literaly changed my life. I have enjoyed reading your blog for the past 4 or 5 months now. You are such a natural writer I always wonder why you haven’t written a novel before. We have similar backgrounds. I too was raised fundamental Baptist. I was forced to attend church and Baptist shcools. My parents wanted me to go to Bob Jones University and Study to be a pastor or a missionary. So right out of high school I ran off and joined the U.S. Navy. While I still consider myself a Christian I do not go to church and am not religious. I don’t think God gives a shit if one goes to church or not or even what church. Any way I enjoy your blog and am looking forward to purchasing your book. Because of this site I have lost 30 lbs , I have more energy and I feel like a teenager. Thank you Richard and keep on doing what you do!

But mention this blog to anyone in the “old country” — that’s a metaphor, for you literals out there — and it’s basically a yawn. Absolute and total disinterest. Number of readership doesn’t matter, success stories don’t matter. Relevance is irrelevant.

If you’re not on Good Morning America, Oprah (good riddance), Dr. Phil or whomever other captures unimaginative, canned thought nowadays…toward an analog of common recognition of acceptable discourse or, a death not far from birth (another metaphor, literalists), you don’t matter.

…Unless, you’re Jasen or any of the other increasing numbers of youth and aged who will, and should, let their preceding generations die the death they deserve.

If there is an unpardonable sin, it surely must be incuriosity.