Thanks for the emails. I love the love.

What follows is the story and I’ll endeavor to make it an interesting story. It begins when we originally entered into a sales contract around October of 2001. Problems ensued. The seller had built the cabin too close to the property line and there’s a setback requirement. OK, so we abide, as the R/E agent submits a “variance” request to the county (let is slide). This takes a few months. The request comes back not denied, but inapplicable. Turns out the guy built the place over the property line, in one corner. So what you need is not a variance, but a property line adjustment and this is something you work out with the neighbor. Fortunately, the neighbor had built their driveway over our property line or, future property line, I should say. And they were very nice and cooperative.

Still meticulously holding to the sales contract, we noticed the seller that we were willing to undertake that process as well but, as it was early 2000s and R/E was going crazy, the seller decided it was our fault that he built his house over the property line (and, his mother’s ashes were scattered on the property, and, he had cancer and other non-sequiturs), decided to back out of the deal we’d already invested 6 months in, and now the sort of properties we wanted were out of our price range.

I hired a lawyer.

To make a 1 & 1/2 year story short, the seller must not have read or understood anything in the contract we agreed to (reportedly, his girlfriend was a “lawyer”); I had, and after a long process of him ignoring the mediation request (gave up any possibility of collecting attorney fees, if he prevailed), then the arbitration request (now we can file suit), he finally took notice of our notice of imminent filing of suit, per the terms of the contract.

It ended as quickly as it began. The very next weekend we travelled to Arnold, sat across the table with Mike (now dead, succumbed to the cancer), and he only asked if I’d be willing to cover a coupla thou of back taxes and reimburse for the $300 of gas he just put in the tank. I agreed, and he tossed me the key. We closed escrow within a week or two. Upon signing, we made about $80,000 in terms of value appreciation over the term of the dispute.

He literally walked away, leaving everything. He was living on a sailboat the the SF Bay and in the ensuing six weeks we endeavored to sort it all out. We were pleased, and this is what it looked like. But we never finished sorting his shit out. We barely got started. Because…

I burned the place down.

Voicemail, back in San Jose, on my cell upon walking back to the car after a movie: “Mr. Nikoley, this is the Arnold Fire Department. We got a call about 7pm tonight, responded, put out the fire, and have stationed a watch. Please return the call.”

My heart sank. I knew immediately. My parents and I had been there over the weekend, watched a movie before departing the in the early afternoon, but had all remarked how it smelled a little smoky. 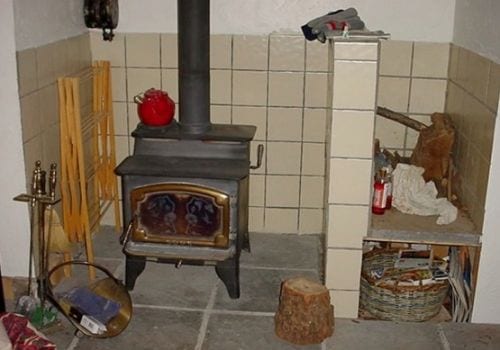 If you’ll notice the basket to the lower right, I’d cleared out that area and used it to hold the ashes I cleaned out daily from the wood burning stove. What I failed to notice is that it was not tiled, but bare wood. How dumbfuck is that?

“So now you know The Rest of the Story.” To this day, I’ve never lived down the fuckup with Bea. Use your imagination. “Well, you burned down the cabin…”

We were up early the next morning; Bea, I and my dad loaded into the Hummer and headed up the hill. I had talked to the fireman on the phone. “It’s a very small fire. There’s a bit of damage and the hole is only about 2 feet.” I took stupid comfort, not realizing “he’s a fucking fireman!” What’s a “small fire” to a fireman?

When I stopped the car, got out — and from the driveway could see through the hole and all the way into the upper level — and my dad — who’d gone ahead — came out shaking his head — I got a bit misty eyed. It was devastating, having just spent a year and a half struggling to get the place.

I began calling contractors immediately. The phone still worked, amazingly. One came out, wasn’t interested, but I soon found one who was.

But it tuned out to have constituted my biggest silver lining in the end. I managed every aspect of the design for the rebuild. It took a while because we were dealing with an insurance company based in Florida who, for a $600 fee upon close of escrow, became liable under contract six weeks later for about $170,000. Thems the breaks. The rebuild took about $140,000. The big extra was that as I mentioned, the seller had left everything (including his wedding ring). I was up front with the InsCo: “Look, we just got this place, the previous guy left everything and I don’t want any probs on personal property claims.” Easy; “You own it, so claim it.” Fair enough. We had almost nothing of our own property in there and got $35,000, allowing us to furnish it roughly like a Cabelas.

And so it was that around Christmas, 2003, we got the place back, and far better than we figured we’d ever deserved, only it took nearly four years from the time we first looked at it…and after having looked — and smelled — dozens of stinky cabins over a half dozen 3-hr trips to Arnold — Bea made a few more —  I said to the agent after only a few minutes: let’s go write it up.

And so now, after many years of mutual enjoyment of the place by ourselves only, with family, and with our dearest of friends, we’re ready to make it into a vacation rental.

It’s not that the place is cursed, it’s that it’s mysterious. It reminds me, in a drunken state, of a woman who’s willing to have you, but you’re going to give her everything she she thinks she’s worth for it.

Back in 2005 we took out a 2nd loan on the place for a townhome development property I was working on with some partner investors. By the time we did the architectural and engineering and took it all the way through the stupid dumbfucks at the city council and got it approved, the project was no longer viable. And so, the money we took out of the cabin that should have been replenished well within the 5-year reset period didn’t happen. Consequently, it’s plain stupid to retain the place without any income on it.

Consequently, you, if you’re in California or are planning a trip there, can rent my cabin. Supplemental pics and history, here.

As an international blog this post has nothing to do with marketing, but about telling a personal story. The good news is that within an hour of posting the listing we booked 4 days, then 3 days, and have a tentative for another 4 days.

I kinda morn the fact and realization that had we made it a vacation rental from the beginning it would have long been paid off. But I was so financially fat that it was nothing to leave it sitting dark 10 months out of the year.

You live, you learn and hopefully, you do a bit better the next time around.