A week or so ago my brother rang me up.

“Hey, I’ve got four VIP box tickets for a concert next Friday at Shoreline. You and Bea wanna go with Dawn & I?” I really didn’t pay any attention to who it was — with all the balls I’ve been juggling, lately — and I still hadn’t by the time we drove into the VIP parking lot just adjacent to the exclusive bar and food area. I know, amazing I hadn’t bothered to take into account who we were seeing; but now and then, I’m happy to go along for a good ride and not ask any questions. I actually do like surprises. From the sound of it, it was to be some R&B deal which would suit me just fine anyway. He had rattled off a couple of guys’ names, which hadn’t rung a bell.

…But that’s only because I’ve never been a Dead Head, never understood them — even though a cousin, who’s among a very small collection of “my favorite people in the world,” is one. But I’ve never really connected with him, at that level — even though I have a few Grateful Dead albums in my collection including one or two as a gift from him.

Here’s two 25 second clips, the first one as it was still light, the next from darkness.

Further: Clips from 6/3/11 Shoreline Concert from Richard Nikoley on Vimeo.

You might notice the wafts of smoke towards the right of the frame in the daylight clip. Guess? The sweet aroma of marijuana burning is nothing new at concerts, of course, but this seriously puts every concert I’ve ever been to – to shame. This was intense and it permeated the entire venue at all times. But better than that, nobody was being surreptitious at all. Completely out in the open, though not as if to flaunt. These were cool people as I came to observe over hours. Peaceful. People.

In the next box over there was a young farmer of 130 acres in Mendocino — growing raspberries, some other berries, and, I would suppose, marijuana. He had processed some of his crop into a sort of hashish, which he was mixing with tobacco to roll, as the Europeans do.

…It was just as I’d remembered. And then Bentley sent me off with a nice nugget for a rainy day with some friends…

Oh, yea, this is also a food blog. 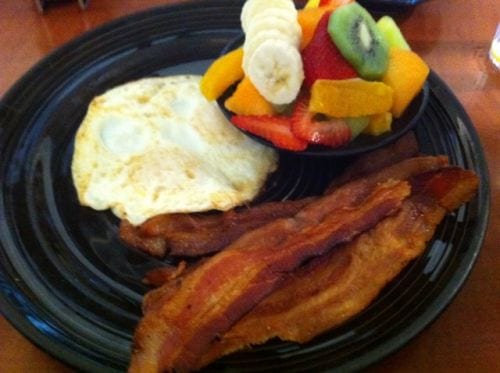 It’s a new local restaurant I’ve found that’s happy to do my eggs in butter and mix me up a wonderfully varied fruit bowl to substitute for the potatoes and toast. I never get the hash browns, anymore. That shit just reeks rancid, to me.

Oh, yea, this is a Sunday Rock post so let’s get to a couple of clips. The fist one, a classic from 1970: Carlos Santana, Live; Jingo.

Next up, same thing but recent; twice as long, but with Eric Clapton and Cosmic Carlos jamming to Jingo. Here’s the deal: I don’t do a lot of Sunday Rock posts, as I used to, because I only post videos I can enjoy for 2-3 viewings, fist. So hope you enjoy, too.

Wow, I really like both of those two selections.