A few of the unanswered, unresolved, unfiled items from the FTA inbox, oldest to newest.

Loyal reader of you blog, especially since months ago, when I was in a rough spot about my testosterone and started to research how could I increase it naturally. That research took me to diet, and its profound impact in hormones, and from there I discovered Paleodiet. According the countless scientific studies I read (yes, I’m obsessive) the diet that optimizes testosterone is basically a paleo Diet free of too much carbs. I had the epiphany that “every man should know about this” (because I had no idea about hormones, or really healthy diet, and low testosterone seems too much common nowadays) and put my research in a free ebook about increasing testosterone, where I explain the keys to diet and lifestyle that allowed me to recover my motivation and drive (including sex drive and performance), with no drugs, no strange supplements and nothing that was not tested by science (I quote about 35 scientific studies in the report and I gathered lots more, as I said, I’m a bit obsessive).

The Testosterone Report. The report is free.

~ A number of people emailed about this comprehensive review of the paleo diet by Jon Barron of Baseline of Health. It’s pretty fair and balanced and get s lot right.

The idea that the so-called paleo Diet is inherently healthier is simply not supported by the evidence, either ancient or modern. What is supported is that eating modern highly processed, high-glycemic foods is unhealthy. Diabetes was virtually unknown in China until people began eating the modern Western diet. But before people started eating modern diets in China, they weren’t eating anything remotely close to the paleo Diet. They were eating a largely vegetarian diet grounded in rice and noodles. For centuries, they ate grains without problems. It was the introduction of refined sugars and oils and processed fast foods “what done em in,” to quote Eliza Doolittle. As a side note, although meat consumption has gone up dramatically in China, with disease rates climbing right alongside them, it’s probably not the meat that’s causing the problem. It’s most likely all of the refined, processed, fast food that’s killing them. 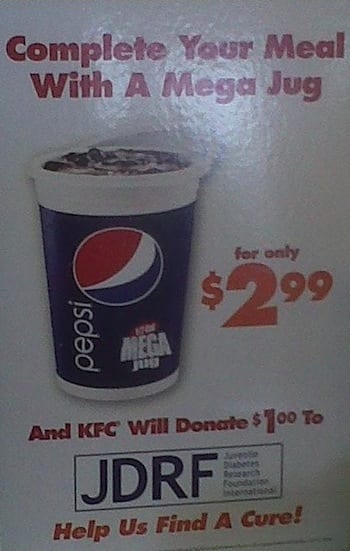 Ideas? Anyone? Such a mystery. Certainly “Mega Jugs” have nothing to do with the doubling worldwide of diabetes to over 350 million people. See here too.

Was chatting with David Csonka (he was the one who did the survey) and he mentioned you were a pretty cool guy so I thought I would introduce myself. I have seen a few of your posts about the vegetarians and vegans out there…I get a good chuckle out of those in fact because I was one of “those” people as well about 7 months ago.

I just had my success story posted on Mark’s Daily Apple last week.

I have also started my own site (www.beingprimal.com) and quickly built up a following. I focus on the Being part of the primal movement. I am very interested in seeing if you want to do an interview via skype.

I am intrigued by the shift you have taken and I like the notion that you are experimenting with this lifestyle and not simply following “the rules”. I call it “taking ownership” and it would be a great lesson I would like to pass onto my flock.

I’ll get with Dean about us getting together on Skype.