I’ve Time Warped to the 80s and Beyond

Yesterday morning Beatrice headed out to do some class at the gym she’s a member of, just a few minutes away, in Los Gatos, CA. The class was cancelled and what she was previously informed about the imminent closure of the gym was incorrect. Not closing end of September, but end of August and all classes are cancelled.

She was referred to a different place and they had a deal. Initiation fee of about $600 waived entirely for new members coming from Anastasia’s. She went & checked it out. Came home and told me all about it. I was more than intrigued. I’ve retained my membership at San Jose Athletic Club for the last year since we moved away from downtown. I knew I’d be quitting soon, so this looked like a ripe opportunity. 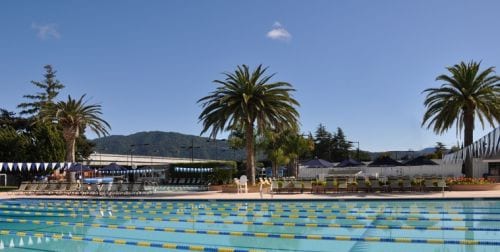 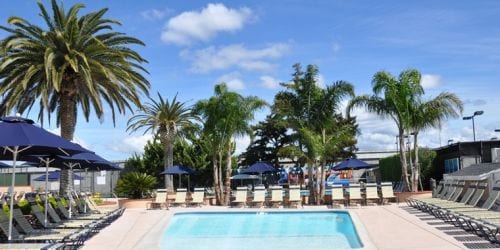 Just a couple views of the Los Gatos Swim and Racquet Club, a family owned and operated concern since 1959. Workout facilities, three swimming pools and 13 tennis courts. Bea got her tour of the facility from Chris, a grandson of the founder. It was originally founded as a social club with a bar, banquet facilities, pool and other things to amuse and attract, back before America became a mass of worry warting, busy body, Oprah watching, FOX/CNN/MSMBC watching, hand wringing fat ass morons who have the audacity to actually vote to impose their whacked and warped idea of a “value” upon you.

Americans knew how to have fun and if it cost them a few years in longevity, they didn’t care much. Way back then, people actually had a sense of responsibility, took their chances and lumps and didn’t really think you had to pay for it. Now, America is principally noted for its feverish desire to work out a scheme for everyone to live at the expense of everyone else.

We filled out the paperworks, Chris the grandson came over to welcome us, and we’re all set. I did immediately notice that the place is right up against the 85 freeway and offhandedly mentioned to him that they were lucky they didn’t get taken out by Eminent Domain, as the place is far older. He smiled, then asked me if I had three hours. By the “wisdom” of the “Founding Fathers” and their precious Constitution — of no authority — they only lost three of the tennis courts they should have had indefinite right to, until disposed of in a manner consonant with their values.

But your values ruled, by force. They had no choice, after years of fighting and attorney fees, to merely protect their life’s work. But you get to get to work and home a little faster in the bee hive or ant hill of modern collectivized life. The cool thing is, you didn’t even have to go put a gun to their heads yourself. That’s the cool thing, see? You get to go into booths and vote for others to do your dirty work for you. And you’re far from ashamed. You’re proud of it. You wear stupid stickers on your lapel each time you exercise your “right” to subjugate yourself to the mob in symbolic action. A 1/300 millionth say in your own affairs. Be proud, America.

But to the subject, finally, the place is amazing in terms of the clientele. I spent three hours over there today as well (great WiFi). In two days I have seen exactly one women wearing a bikini who ought to be bared by law from doing so (yes, I might agree with a law or two – joke). Otherwise, it’s lean kids, lean adults, a bit of slight overweight here and there, and the Hot Chicks.

It was like laying on the beach in Europe or many other places, or America as late as the 1980s.

So there you have it.