Just a note about how things are going lately in shedding the roughly 15 pound gain I reported about in this recent post. Back down to 180 as of this morning, three pounds off since AHS, and things are moving well. Some moderate carbs but not excessive, my morning Huge Fat Bomb smoothies, doing intermittent fasting of 24-30 hours 1-2 times per week, fasted simple heavy resistance training of about 20 minutes 1-2 times per week, 1-2 20-minute dog walks per day, standing most of the time when I work rather than sitting (like right now), and trying to eat BIG on non fasting days, including grazing and munching into the later evening. I’m trying to roughly approximate a very high fat diet with moderate protein and moderate carbs.

I plan to add sprints or intervals on the elliptical machine after each workout beginning Monday.

Also, staying away from restaurants as much as possible. When we do go out — see below — it’s a steak and a bit of veggies for me, or just a steak a-la carte. Wednesday evening I began what turned out to be a 28-hr fast with this meal around 4pm. 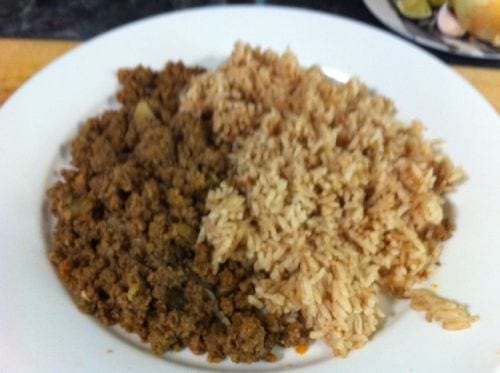 This was after my Liquid Fat Bomb earlier in the day. The fast was broken with a 10oz. filet, asparagus, and a scotch. 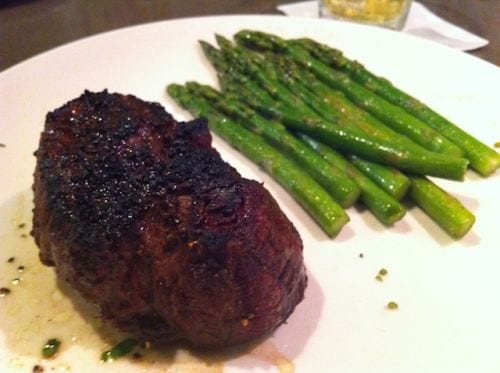 Nicely Grilled on the Outside 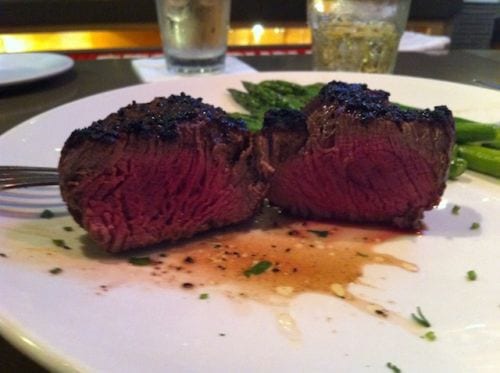 Perfect for Me on the Inside

So in terms of self experimentation, I have no idea what’s contributing, what’s not, or even what might be hindering progress while still progressing overall. Too many variables and too complex to judge, but it’s roughly what I did in the past, so I’m just sticking with the program.

One thing new is the daily cup or more of high fat coconut milk in the smoothie each morning (ref: Liquid Fat Bomb Smoothie, and the impressive science behind it). I’ve always used some coconut milk, but that was in cooking, maybe once every couple of weeks on average. I must say that I am extremely impressed with the thermogenic as well as satiating effects when taken in the morning (usually between 9-10 am). This just may become a regular staple of life.