Appreciating the People of the Ancestral Health Symposium 2011 #AHS11

I’ve added the Twitter hashtag #AHS11 to the titles of my previous two posts and will continue to do so. If you have a Twitter account, you can search that hashtag to access the thousands and thousands of tweets that took place over the span of the event. This is a way for folks who don’t follow each other’s streams to converge on a topic of common interest. Oh, and I generally hate Facebook and pay almost no attention to it. Just had to get that in there.

On two other notes, please email any pics of the event you’d like to share and I’ll spice up future posts. In addition, I plan on doing a roundup post on Wednesday in order to share all the blog posts by others on AHS. So if you attended and bloged or will blog about your experience, then please email the URL to include it. If you don’t make the Wednesday deadline, I will continue to add links as they come in, even after the post it up.

First to the organizers of this event, Brent Pottenger and Aaron Blaisdell. They worked so tirelessly on this over many months and were just go go go during the event itself. I wonder if they got any sleep at all. And to the many volunteers as well: great job. Everything seemed to roll right along as planned and scheduled, and that sort of thing never happens by accident. Most impressively, throughout the event, presentations, Q&As and breaks, time never went over so the schedule was always reliable. Far too often at conferences I’ve attended, things get further and further behind. I believe I was on the email list of the very first email Brent sent out on this, likely around the time he posted about it in December, 2009. While I wholeheartedly supported the idea I was very skeptical such an ambitious undertaking would come to fruition. But sometimes it’s a pleasure to have been so wrong. 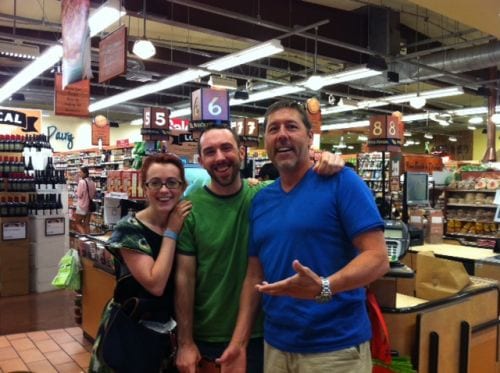 Chris Masterjohn has to be about the greatest combination of funny and smart I’ve ever seen. As I’ve already mentioned, he and Melissa McEwan make the cutest couple ever and I wish them all of the best as they plan for a move out to the midwest next year. 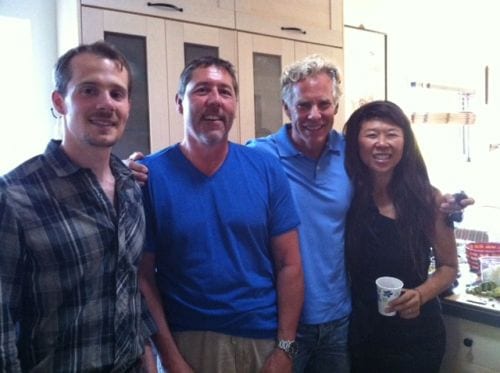 Dr. BG of Animal Pharm (link removed) has been a local Bay Area buddy for a good long while and it was nice to see her again. She’d not met Beatrice yet and they hit it off marvelously. Over the years I’ve probably linked to more of Stephan’s posts than any other blogger and he has always been very generous with his time via email. I believe Stephan and I got the very first two of US Wellness Meats steaks that came off the grill. No side dishes needed. And Mark Sisson. During the whole of the AHS he made himself massively accessible by standing at the back of the main room so that people could easily approach and chat with him. After many exchanges of emails and phone calls with Mark over the last couple of years, it was really great to finally meet him in person.

I’m glad I waited to do another post on Low Carb vis-a-vis Gary Taubes. A couple of months ago I ended up in a short email exchange with Gary, initiated by Dr. BG, and was surprised that he even knew who I was. As it turned out, Gary was the first person Bea and I met at AHS. We’d checked into the hotel and promptly went out for a walk around the neighborhood there on Wilshire Boulevard. Upon our return, Gary was just checking in and he graciously chatted us up for 15 minutes right there in the lobby. Later, we talked about his hypothesis and about my post on 180 Degree Errors back in 2008, which he’d read. Then at the end of day one, I had the pleasure of chatting with both Gary and Dr. Mike Eades over a drink in the hotel bar. Can you imagine better drinking partners? Gary is quite the Obvious New Yorker when you talk with him. Quite the No BS Guy. At any rate, there are some interesting disagreements between Gary and Stephan in terms of how we get fat. But I’ll save that for a specific post later. 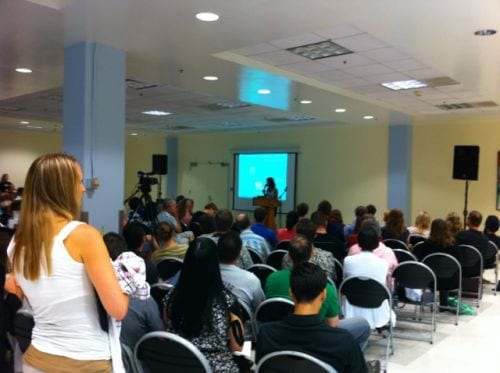 No post about anything related to this community would be complete without mention of its newest luminary extraordinaire: Denise Minger, who can eat a whole raw vegan in a single sitting. And yes guys, she’s just as hot as she looks in her pictures. And she dresses exactly as she should, if you know what I mean. She’s bubbly and cheerful, a true joy to be around. All that said, her best quality is what I termed her “enigmatic geekiness.” Other than that, it has been confirmed that she’s made out of meat. And I did keep reminding her, so she’ll never forget it, that as she said in her first jimmy moore interview, she “owes it all to me.” Ha! But seriously, I count taking her email seriously and doing those two posts that took her blog from a few hundred visits per month to well over 100,000 in a single month amongst the very best contributions to the movement I’ve had the honor of accomplishing. It is a credit to the paleo / Ancestral community at large that they have extended to Denise every gram of credit and recognition that she deserves. Hat’s off to you all. 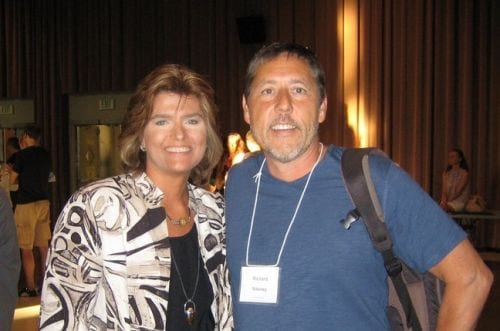 And speaking of the fairer sex, Nora Gedgaudas was such a sweetheart, and with an equally sharp mind. Her presentation was stellar and my guess is that her’s was Beatrice’s favorite of the whole AHS.

And speaking of Jimmy Moore, I didn’t even know he’d be attending until shortly before the event. He showed up to the presenter’s party at Aaron’s midway through and just off the jet from back east. I felt a tap on my shoulder and turned around to find myself face to chest. Jimmy is one tall guy. I turned to Bea and said, “”there’s jimmy moore” and she ran over and gave him a big hug. Jimmy later tweeted: “superstar sighting: @rnikoley I’ll never forget your sweet wife giving me a big hug. What a sweetie for a great guy. Richard rocks!“ Such a sweetheart. And Jimmy was everywhere all at the same time, on his iPad 2, snapping photos and tweeting everything he could, tirelessly. 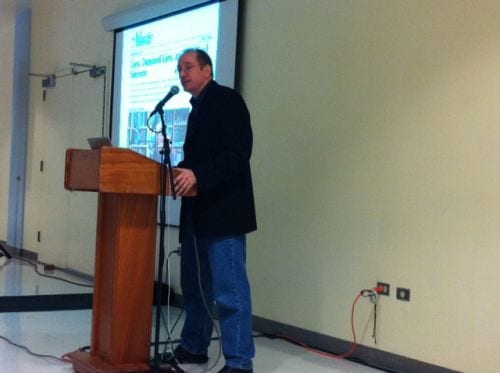 The man who gave new meaning to being a Fat Head

The morning of the first day and my first entry into the main auditorium, I came face-to-face with Tom Naughton on his way out. I extended my hand and Tom says, “give me a bear hug.” I’ll tell you what, Tom has taken the ability to be funny and serious at the same time to a form of art. His presentation was probably the most cogent and complete treatment of the scientific method applied to health studies that has ever been put together. And he pulled it off while getting dozens of laughs from the audience throughout. Tom has also continued his own body transformation since his movie and from other pictures I’ve seen since. He looks great.

There are so many others to mention as well, and I loved meeting and talking with each and every one. Loren Cordain was so exuberant and wanted to talk with everyone he could. Pedro Bastos, Doug McGuff, Don Matesz, Paul Jaminet, Robb Wolf, Jamie “That Paleo Guy” Scott, Emily Deans, Julianne Taylor, John Durant, Andrew “Evolvify” Badenoch, Erwan Le Corre, Frank Forcenich, Danny Roddy, Keith Norris, Skyler Tanner, and more and more. 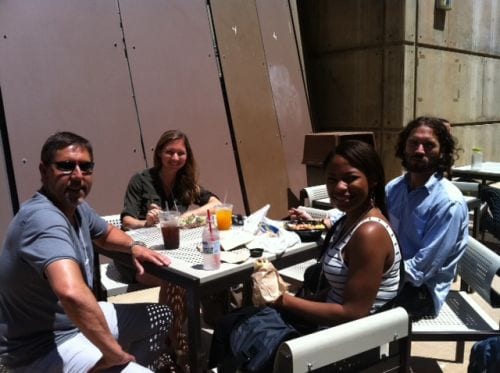 Well I know I’ve probably forgotten a few. And there were others I wanted to meet and talk with but never seemed to have the chance. And of course, thanks also to the many dozens of readers who came up and introduced themselves as both long time readers and new readers alike. Of course, it’s for all of you and for myself that I do this. A special thanks for those few I recognized as commenters. Comments are what make this blog a special place, in my view.

And for a general recognition to all the attendees: you folks are beautiful. I can’t imagine an event with so many great looking body compositions all gathered in once place outside an Olympic Games, and I’ll bet we’re all a good bit healthier too. I propose that from now until AHS12, we make a list of every stupid reporter, every stupid dietician and every stupid researcher who makes a stupid comment about paleo, kidnap them all, kick their asses right into the main auditorium with an added admonishment: “now, go look around you, dumbfucks.”

Here’s a shout out to the amazing US Wellness Meats who, not only donated 100 grassfed NY steaks to the presenter’s party at Aaron’s, but on day two of the conference when the salad bar concession was closed downstairs, set out a bottomless and endless supply of grassfed beef jerky, grassfed beef sticks, raw milk cheese and grassfed pemmican. It lasted all day. They literally fed us all, and both Beatrice and I remarked how we felt satiated and energized all day — on meat & animal fat. I’m going to soon put in an order out of simple appreciation and I’d encourage anyone else so inclined so do so as well.

And finally, a special thanks to my loving and lovable wife Beatrice, who enthusiastically involved herself in everything, shook hands, gave hugs, and chatted her head off. She had a marvelous time from start to finish.

Update: As I knew I would, I forgot a few mentions and so here they are: Andreas “The Giant Swede” Eenfeldt, MD, was super nice to me. We presented opposite each other on day 2 and he approached me early in day one to shake hands and wish me the best, as I did for him. We ended up both having excellent crowds, which was great. I finally met the great J. Stanton of gnolls.org and author of The Knoll Credo, which I’m currently reading. J. was kind enough to mail me a copy a while back, and during the “meet the authors” event, Beatrice had to force him to sell her a copy, which he finally relented to, and autographed it for her. J. Also had the most notable haircut of AHS. And how could I have forgotten the kind, soft spoken Seth Roberts? He and I talked a lot about self experimentation, which subject he is far more formally versed than I. Seth’s presentation partner was NYT best selling author Tucker Max. I ran into both of them in the coffee room at the hotel one morning and Seth introduced us. Unfortunately, I missed their presentation because we were late to get parking and get to the event. Later, Tucker approached me and said “hey, you’re that Free the Animal guy.” Yep. Turns out he’s read some of the blog and thought I would really enjoy his presentation about MMA fighting and its relationship to human violence. I certainly won’t miss it.