It seems to me that hands down, the most heralded eating experience of the whole #AHS11 affair was Animal Restaurant. Everyone who was anyone gave it a shot. We went on Friday night. Skyler made the reservations a week or so in advance. 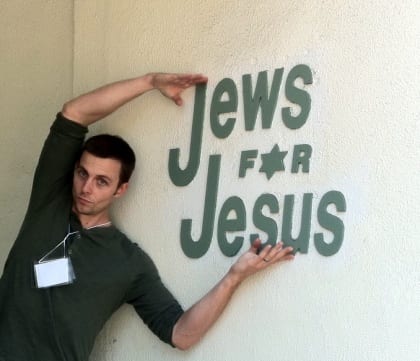 Enough of fucking Skyler, for now. Let’s get to the food. Animal has a menu that changes, but here’s a good sampling. Since it’s tapas style (which I love), we decided it would be best to divide off into the four couples present. Beatrice and I had six plates. From memory: quail, crispy pig ears & egg, bone marrow with chimichurri, foie grass on a biscuit & gravy, halibut, and the best of all: veal brain. I only managed a few pics because I was too busy indulging and shouting expletives at the guy sitting next to me (guess). 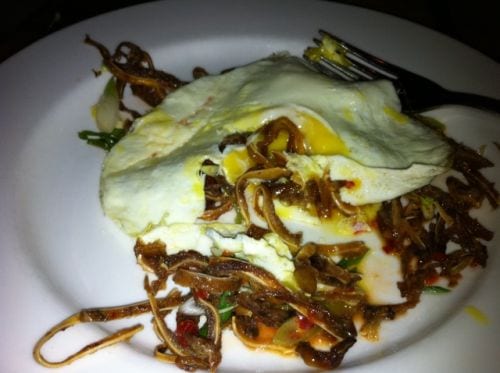 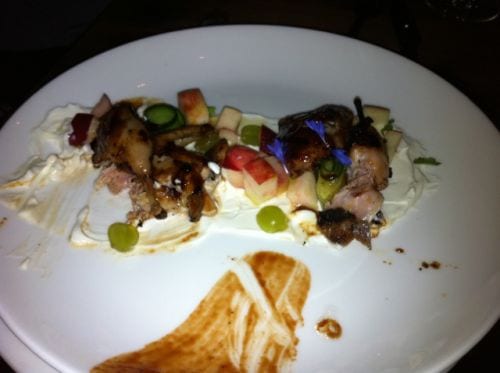 Quail Bits (yummy; an uncle and I once killed a few dozen quail in a single blow; yummy too) 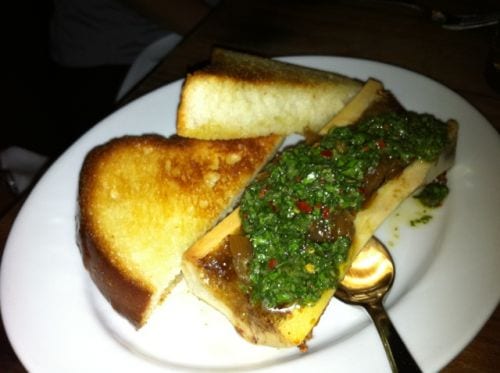 The Bone Marrow with Chimichurri 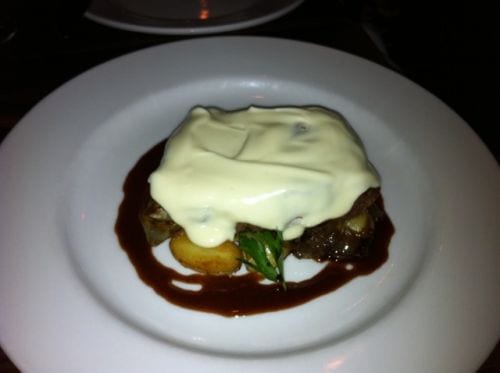 But enough of my crappy iPhone pics. M, of NomNom Paleo does a complete and pro photography treatment, and I do mean complete, and pro. Don’t be a fucking idiot by not clicking over. Full Stop. Click. Come back, because you have yet to hear the story of the shouting match. OK, I’ll steal one, the foie gras biscuit and gravy, my second fav after the veal brain.

Really, it’s a toss up between that one and the brain.

Before I forget, no, this was not anywhere close to gluten free, in spite of no bread basket…and I think someone mentioned they use peanut oil. …And they politely refuse any mods, according to something else I saw, somewhere. You know what? Don’t even get started with me if you want to — as in the words of Sarah, husband of the loud mouth — “kick me off paleo Island.” When you can get exotic food like this, in a setting like this, with friends like this (except for the loud mouth), then you throw caution to the wind and you go for that chocolate dessert with bacon it it, too.

Skyler is such an asshole, and between you and I, I think his wife Sarah agrees.

SKYLER: SO WHAT THE FUCK, MAN?

ME: WHAT THE FUCK IS UP WITH THAT COLD WATER DEAL, PUSSY.

ME: TALKING TOO LOUD = CURB YOUR ENTHUSUIASM 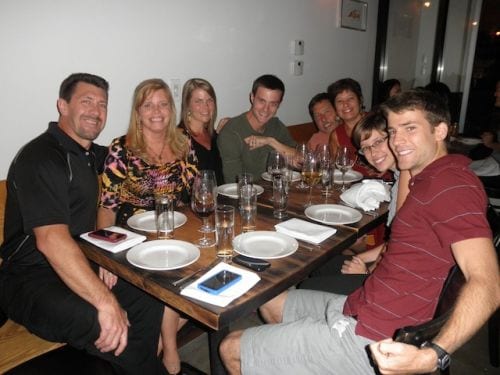 There’s Keith Norris & Michelle, Sarah, Loud Mouth, Beatirice stealing my well deserved limelight, and Austin friends Bryan and Tracy Barksdale, whom it would have been a pleasure to talk to more, had I been able to shake Skyler. Jesus.

Perhaps Sarah said it best when she announced she’d be going to the spa the next day. Not having a ticket to AHS, “I’m not going to pay to hear Skyler speak. I might pay to shut him up.”