Liquid Fat Bomb Smoothie: The Ultimate “Energy Drink” That Will Blow Your Mind 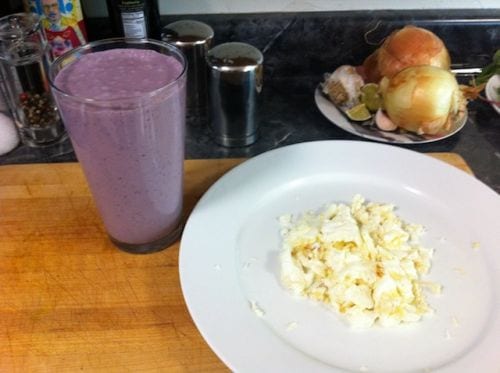 You have to laugh. In today’s world of industrially engineered food and drink, the term “energy drink” is merely euphemism for sugar drink. Yea, some are laced with caffein, for added “energy.” And naturally, engineering being what it is, you don’t even have to look to know that cans of that crap probably contain upwards of 8 teaspoons and more of sugar in a single can. There are 4 grams in a tsp of sugar, all carbohydrate, so an “energy drink” sporting 30 grams of rapidly assimilating carbohydrate in liquid form is about 7-8 teaspoons.

Now, let me ask a dumb question. How many of you would put 8 teaspoons of sugar into any 10 or 12 oz. unsweetened drink? Anyway, enough of that nonsense.

As anyone with an ounce of true nutritional sense knows, fat is the ultimate source of energy, both dietary and body fat. It’s simple. A gram of carbohydrate like sugar or HFCS has 4 kilocalories of energy, while a gram of fat has 9 — more than twice as much, gram for gram.

But there’s one kind of fat that’s a bit special, medium chain triglyceride (MCT). What’s special about it?

MCTs passively diffuse from the GI tract to the portal system (longer fatty acids are absorbed into the lymphatic system) without requirement for modification like long-chain fatty acids or very-long-chain fatty acids. In addition, MCTs do not require bile salts for digestion. Patients that have malnutrition or malabsorption syndromes are treated with MCTs because they do not require energy for absorption, utilization, or storage. Coconut oil is composed of approximately 66% medium-chain triglycerides. Other rich sources of MCTs include palm kernel oils and camphor tree drupes. The fatty acids found in MCTs are called medium-chain fatty acids.

You usually have to dig a bit if you don’t already know, to discover that these MCTs are SATURATED FATS! Or, should I say, arterycloggingsaturatedfat?

Another thing to note is that they digest rapidly, like sugar in a drink and so are truly in the category of supplying rapid energy, the whole point of an “energy drink” or glucose gel, such as endurance athletes use. But guess what? Little to no glycemic load. They don’t spike your blood sugar to significant degree, and thus, don’t spike your insulin significantly…leaving you to later need another “energy drink,” and another, and another. Peak, valley, peak valley; wash, rinse, repeat.

There’s more. Turns out that MCTs have other huge benefits in terms of blood sugar control in diabetics as well as actual fat loss. Yea, a fat that makes you lose body fat. Let’s take a look at what the scientistas have to say.

CONCLUSION: These data suggest that shunting of dietary fat towards oxidation results in diminished fat storage, as reflected by the loss of BW and subcutaneous adipose tissue. Furthermore, MCT consumption may stimulate EE and fat oxidation to a lower extent in men of greater BW compared to men of lower BW, indicative of the lower responsiveness to a rapidly oxidized fat by overweight men.

This was a randomized, crossover, controlled feeding trail. Subjects got either high amounts of MCT or LCT (olive oil). Crossover means that each group was subjected to both diets, which is gold standard. Those on MCT lost almost twice as much fat as those on LCT.

This is just a review article looking at studies demonstrating a lot of the benefits of MCTs that we’re talking about. Do note the warning siren about elevated fasting cholesterol and triglycerides. Of course, this is just the abstract, such that some news media regurgitator in the “Health” section can write a dumbshit headline like “Coconut Milk Raises Cholesterol Levels, Study Finds.” Then you tear into the full text and find it wasn’t significant, it was one poorly controlled study out of many, or some other BS. And who cares about cholesterol numbers anyway? Cool that it may also may aid intestinal repair and protect your liver from drug or alcohol induced toxicity, important for those on medications or who drink regularly.

More? Hell, I don’t do science that often anymore, so let’s go all out. But in consideration of the environment, let’s save some space and you can click over to the abstracts you want to read.

PubMed: Physiological effects of medium-chain triglycerides: potential agents in the prevention of obesity.

PubMed: Medium-chain fatty acids: functional lipids for the prevention and treatment of the metabolic syndrome.

Well here’s one from 1986 that bears quoting the entire abstract, especially in view of the recipe for my secret energy drink, below.

Abstract: Some of the nutritional work with triglycerides consisting mainly of C8 and C10 fatty acids (MCT) lends itself to speculations about their influence on arteriosclerosis. Arteriosclerosis is thought to be part of the normal aging process which is due to age associated molecular biological changes. The lipid theory of arteriosclerosis is rejected. Pertinent studies with MCT include these observations. Feeding of MCT to rats resulted in animals of low body weight, small fat deposits and excellent survival rate. This deserves emphasis because of the beneficial influence of low body weight on aging and arteriosclerosis. MCT feeding was associated with low linoleate and low tocopherol requirements in rats. This may lead to reduced formation of those linoleate derived prostaglandins which favor thrombosis formation. Lower linoleate requirements may also lead to the presence of fewer uncontrolled free radicals in the cells. MCT feeding is associated with low levels of serum and liver cholesterol involving speculations that tissue conditions are such that an adaptive increase of cholesterol is unnecessary. The Demographic Yearbook of the United Nations (1978) reported that Sri Lanka has the lowest death rate from ischemic heart disease. Sri Lanka is the only of the countries giving reliable data where coconut oil (containing over 50% medium chain fatty acids) is the main dietary fat. [emphasis added]

So, while it doesn’t say how much saturated fat the lowest death rate from heart disease-Sri Lankans ate, we do have an idea for another population, the Tokelauans, who eat about 50% of energy from saturated fat and have no evidence of heart disease. I blogged about it way back here.

There was one other issue I wanted to cover, and that’s the potential insulin stimulating effects of MCTs (if any), and whether coconut milk — with 1 gram of carbohydrate per ounce — could present any problem to diabetics. I dug all over the place, got lots of help from Twitter peeps (thanks much, all of you) but in the end could not really come to firm conclusions, so I’ll leave that to comments. Other than that, there’s this interesting conversation between Marty Gallagher and Dr. Chris Hardy at PrecisionNutrition on MCTs, coconut oil, and coconut milk in both a health and training context. Good stuff.

Alright, now while I certainly didn’t need to do all this sciency researchin’ to know that a natural product like coconut milk would be like most wholesome food: good for me…I want to make sure you have confidence, dear reader, that indeed it is safe to go back in the water. The sharks are all over at Jamba Juice getting their faux “health” smoothies (count how many of those sugar drinks have over 100g of sugar).

Nope, what you’ll get here is a smoothie, an energy drink that will blow the lid off all that crap in a cup in terms of sustained, level energy and satiation; and well, you’ve seen the potential numerous health and weight loss and control benefits. Incidentally, coconut fat is about 90% saturated. Of the saturated fat, 66% is comprised of MCTs.

And by the way, I’ve used both coconut oil and coconut milk in cooking for years, particularly for Thai curries. Also, last year at NovNat over a week, we probably each had near or more than a can of coconut milk every morning (see the top pic) and I for one was rarely ever hungry much for lunch, in spite of the activity (though I ate big every meal). And I lost 3 pounds over the week and felt great.

Blend it and consume. I save the whites, scramble them in a pat of butter and add a bit of grated parmesan for flavor, no salt.

An alternative which I’ll try is to do one raw egg yolk in the smoothie and mix the white with the other whole egg for cooking. And, of course, there’s tons of variations you can do with this. The egg yolks make it smooth. The frozen berries make it cool without making it watery with ice.