This is something new. It’s for the masses; knowing, as you do, how much I’m all about the downtrodden, helpless and disadvantaged.

But enough about them. We’re here to check out the life & times of one 28-yr-old Timothy Zork: basically a fat boy since he was a kid. Yea, he was “that fat kid” who, if you’re anywhere near my age, you’ll remember as one of those few & far betweens and either, they found ways to compensate in terms of intelligence & humor, or they turned inward miserably. What an opportunity for video game manufacturers once the tech came available!

Which one was Timothy? You’ll have to see and hear for yourself, if you can spare 15 minutes to listen to…not a scientist or book author or even blogger who has originated, written about and promoted a paleo, Primal, Evolutionary way of life…but for once, from a “regular guy” who benefitted and got Real Results.

I went out last night to buy a new pair of jeans – size 34 – and I literally could not remember the last time I was wearing pants that size; 5th, maybe 6th grade? It felt great. I’ve been fat most of my life; unhappy, uncomfortable, and insecure. I was raised as a vegetarian and spent most of my life eating lots of soy, grains, and processed vegetarian “foods” made out of gluten. I don’t blame my parents; they were making what they thought were the best decisions they could. Despite this “healthy” diet, I grew up as a fat kid. I can’t blame it entirely on the fact that I was a vegetarian; it was a complex mix of genetic, emotional, and dietary factors, but by college I was tipping the scales at around 285 pounds.

Why bother being hungry all the time I was wasn’t even seeing results? It just wasn’t worth it. I did a pretty good job maintaining my 250, I was proud of the fact that all of the pants I bought before starting my job still fit me 3 years later, even if I had crept up a few pounds.

And how about the girls? How was that, being fat? You’ll have to see the interview to find out.

I stumbled into paleo by accident. I had been listening to a lot of programs on Dan Benjamin’s 5by5 podcast network, and heard him mention “Paleo” in passing a few times. I’d never heard of it before and didn’t think much about it, but eventually he picked up Angelo Coppola’s podcast “Latest in Paleo” and I started listening in earnest. I was a little skeptical at first, but the more I listened the more it made sense. It was hard to argue with science, history, and the shear number of amazing results that other people had. 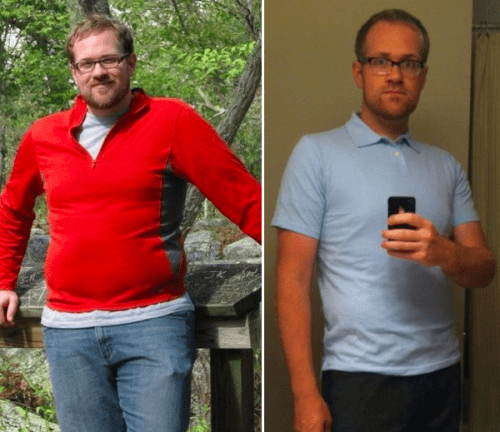 There are other before pics spliced into the video, but you’l have to watch and see.

I think this sort of media has a chance to draw in new folks to the paleo / Primal experience as nothing else. You can help in that by clicking the Recommend button at the top of the post for Facebook, Tweet or reTweet, and perhaps most valuable of all, please consider giving the video a “Thumbs Up” on YouTube.

Alright, this was the first attempt at this, and I hope to improve the production value over time. There was an audio issue on my end towards the end and I apologize for that, but Timothy is doing most of the talking anyway.

So here’s what I’d like to do. I’d like to put one of these up every couple of weeks or so, featuring those of you who have achieved Real Results. I’m looking for impressive results, and it needs to be on a “Paleoish” or “Primalish” regime. This blog could have played a role, but not necessary and I will be happy to highlight and link to whomever it was that got you started…so you other bloggers, feel free also to email your reader success stories (with their permission, or entice them to do so) and you’ll get the credit for starting them on their path.

Email before & after pics and your stories to my email on my About page.

As a final note, we’ll be keeping all interviews to 15 minutes or less, so that you’re more likely to take the time to watch & listen and so that they can go up on YouTube for the additional views that will bring, resulting in more exposure for paleo and Primal.