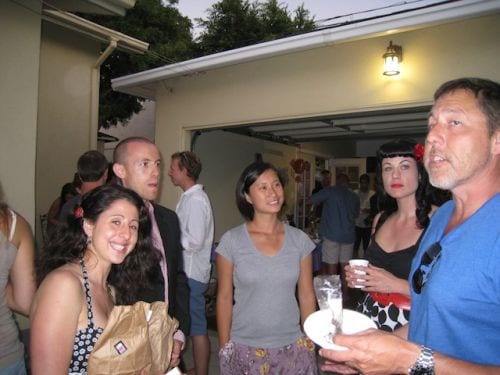 That’s me eating some, right there.

I have been disappointed for many, many years in the total crap they call “beef jerky” that comes in various packages in supermarkets and convenience stores. Oberto plain old natural can work in a pinch, because unlike all the other crap, it actually almost tastes and almost has the dry, chewy texture of the real jerky I remember as a kid (but nowhere close to this). I haven’t looked into why this is in any detail, but I suspect it’s because they cook the shit — instead of dry it — raising the question of whether their crap should even be called “jerky” at all.

Instead, I’ve made my own in the past using basically salt, pepper and garlic powder. I had a pic of strips sitting in my Bosch gas oven that has a dehydrator function, but can’t find it. Basically, you set the temperature to 105 and on dehydrate, the convection fan blows constantly and you prop open the oven door with a wooden spoon for moisture to escape.

You don’t run it up to 180 or whatever, and cook the shit. Not Jerky. So that’s Sophia there to the left. She gave me a sample bag of her jerky, and I was hooked. So she gave me three more bags, one of each flavor — 3 oz. in total — which I devoured in the wee hours while unable to sleep, drafting my first on scene post of the AHS11 experience.

So here’s the deal: Grass Fed Jerky Chews. I’m no expert, but 4 bucks per 1 oz package seems pretty reasonable and competitive, especially for quality ingredients and care in processing. And of course, the beef is dried so it probably equals a few ounces of grassfed beef in terms of cost. The ingredients (besides the grassfed beef):

Here’s a short video of what she does and how she does it.

And some decent testimonials here. I hope you’ll go check it out for yourself and give Sophia a try if you like. I’m not making anything from any orders — not yet anyway — but I do like helping out folks taking the time to make good quality.

I’ll be putting in my order as soon as this is published.