But Don’t Let Unbridled Reductionism Stand in Your Way

Virtually everything I see out of dermatologists is crap. And while I understand fully how they are necessary, given our current state of affairs, needing to save lives made victims of their own pronouncements (in my view), it’s a vicious circle that irritates me unlike much else.

I begin with an evolutionary foundation and context, in everything. Like just about everything else that hasn’t found an ecological niche in the deep blue or underground (actually, they do too; artistic license), our life depends on the sun (that’s a small-S, and a ‘U’). So imagine: there’s an entire massive industry devoted to its defeat. Running from it, protecting against it, avoiding it at fear of peril. It’s the greatest example of what I have long termed Upside Down World I can imagine. There you go: truth, stranger than fiction, and all that shit.

It’s also a morass of confounding variables. Inasmuch as the sun is our very life in every conceivable way, how can one possibly begin to construct a reductionist case against it without necessarily incorporating so many confounding variables, such that any conclusion reached is not chalked up to much ado about nothing?

It has been an interest of mine for a long time. While I supplement with vitamin D3 year round, about 4K IU per day on average, that’s only because as a modern man, I don’t get anywhere near the sun exposure I’d have gotten as did our evolutionary ancestors over the last few million years, who lived life largely outdoors. So even though I was in the sun from about 10-noon this morning, over at the swim & racket club, I’m now safely in the shade outside, standing at my desk on the patio. Can’t have my computer overheating. …And sweat dripping on the keyboard would likely make for an excessively short post. So we supplement. We make do.

Here’s the news piece by the moron regurgitator Enjoli Francis at ABC News/Health:

A new study that links higher vitamin D levels to a higher risk of skin cancer simply emphasizes what doctors have been saying all along: Don’t forget the sunscreen.

There. At this point, the advertisers have been paid off. Bet she didn’t read the full text of the study, as I did, nor think a teensy bit, as I did. She got handed marching orders and marched. That’s it.

I had considered doing a more thorough disection of the study. Here’s the abstract.

SETTING: Health maintenance organization. Patients The study included 3223 white health maintenance organization patients who sought osteoporosis- or low-bone-density-related advice from 1997 to 2001. Interventions Vitamin D levels were ascertained at the time of the initial appointment, and a sufficient vitamin D level was defined as a baseline serum 25-OHD level greater than or equal to 30 ng/mL (to convert to nanomoles per liter, multiply by 2.496) and as a deficient vitamin D level less than 15 ng/mL.

CONCLUSIONS: An increased baseline serum 25-OHD level was significantly associated with an increased NMSC risk. This association was positive, though nonsignificant on less UV-exposed body sites, and UV exposure remains a likely confounder. The complex and confounded relationship of vitamin D, UV, and NMSC makes classic epidemiological investigation difficult in the absence of carefully measured history of cumulative UV exposure.

…So I got a copy of the full text within minutes of putting out the word on Twitter (thanks, Tweeps). But after reading the full text I was left with that where’s the beef? kinda feeling. Let’s do it in bullets, totally generally.

I could go on and on, but isn’t seven the perfect number? Oh, shit, there’s eight. But to follow up on point 2, I did put out another Tweet about NMSC rates in the general population and though this is unconfirmed, it appears that about 2 million people per year present. The follow up period of the study was about 10 years, so crudely, it comes out to about 6.5% (dividing 20 million by 300 million), which is right in line on average with the observations from the study.

This study was supported in part by a Dermatology Foundation Career Development Award in Health Care Policy (Dr Eide).

And so I Googled Dermatology Foundation, clicked over to Corporate “Partners” (so telling), and voila: 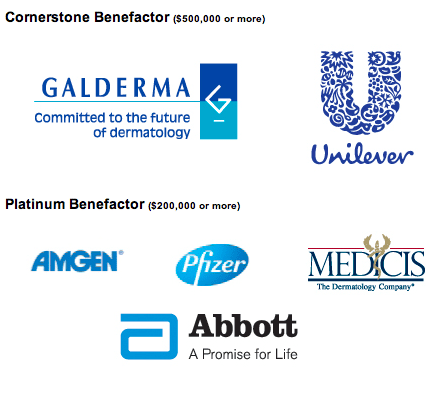 The Great and the Benevolent

I’m not generally against big business, only against big business (corporatism) that seeks to partner with the State (fascism). But look, this is pretty simple. They toss money at all sorts of “foundations” who then contribute or sponsor “research,” the dumbshits like Enjoli Francis at ABC News/Health give them a headline and an article they probably wrote themselves, that includes the admonition to buy more, and the vicious circle continues…and you slather the sun screen on your kid at even the rarest of outings in the actual sun, totally unaware that you’re “protecting” the tyke against a generally non lethal for of cancer while at the same time, putting him at risk for almost all the others, including melanoma.

Incidentally, I consider sunscreen on the nose, forehead, ears and other places particularly susceptible to NMSC a wise move. This is simply technological monkey wrenching with nature and is not going to compromise your overall vitamin D absorption.

I’ll close at this point, but here are three posts you might want to check out, from a while back, all done in one day during a dozen post marathon December 30, 2008.

Vitamin D Deficiency and All Cancer 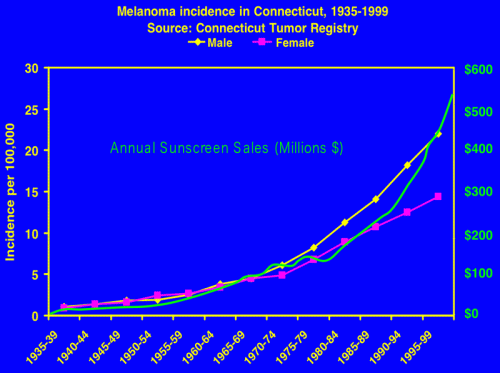 Hard to Show a Stronger Correlation Over 75 Years

Well, again, I just think it’s plain silly to implicate the very single factor responsible for life on Planet Earth more than any other, by wide margin: the sun.

How’s life on Mars workin’ out for ya?

…Alright, just a parting shot to the Grant Whores responsible for this latest bit of Modern Ignorance:

Do note that lead researcher Melody J. Eide, MD, MPH has been at or near the top of the Dermatology Foundation’s list of “Research Award Recipients” since 2008.

Wonder what else she’s cooking up for big corporate payback. The victims are faceless and nameless.