My dad was told by a devout fundamentalist, a Born-Again Baptist, a brother, that he’s a member of a cult: The Paleo Cult.

…I’m busy, with another cookbook review — guess which one — and also editing a video interview with Ricky, from across the pond, and who talks funny. But he lost 90 pounds. No idea how many stones. So this is passion, getting in the way, which are always my favorite posts. 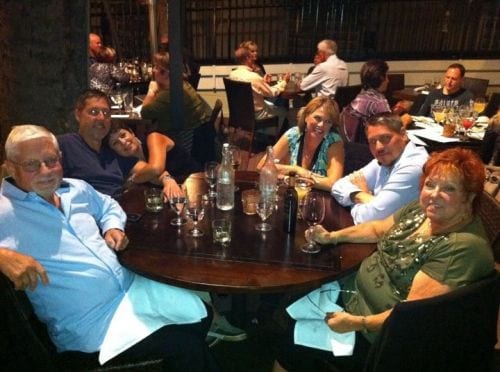 Lothar Nikoley to the left, at 73. Click to open the hi-res version

Since they couldn’t be here for Beatrice’s 52nd (she’s the one attached to my arm; or another appendage, as usual), they came a week later to take her out shopping for a few changes of clothes and a dinner. We went to Palacio (rhymes with paleo) in Los Gatos. I’m the zombie. Have fear. I eat liver.

Having weighed about 40 or so pounds more, I think my dad looks awesomely fuckin’ good for 73. Jesus. Huh? I hadn’t seen him for about a month and when I did last Saturday, I was very pleased. My younger brothers should take a clue, some inspiration, and a dash of shame.

But here’s what’s funny. His baptie fundie brothers — not all — but two in particular who know who they are (and I’m not talking about the fundamentalist preacher — he’s always cool to me) constantly give their older and far wiser brother shit. None are formally educated; neither is my dad. But they have all done very well for themselves in spite of that, and for what I’m saying, here, that’s important. My dad, for instance, with not even an HS diploma, bids construction on some of the biggest projects in the world. There’s no construction project he can’t take blueprints and architectural/engineering specifications of, and deconstruct them all to a spreadsheet of hundreds or thousands of of cost line items that can be easily priced out for any contractor.

The other two have done well too, “among the heathens.”

Years, many years ago, when I saw the horrific and life killing ways of the born-again fundamental baptists, in which cult I was raised from ten on, I talked with my mom over many years, and eventually, she saw and more eventually, they dumped it into the shithole where it belongs. That’s my family. From me to her, to dad and family, and far less successfully, extended family.

That’s because they have zero fortitude discernible to me.

Others didn’t do it that way. The two brothers, specifically? They did it in the worst possibly way. Rather than recognize they believed in a sewer that needed pumping, rooting, and perhaps even a whole waste disposal redesign, changed their lives to be more ou courant, while at the same time, holding on to their “godly” admonishments. Unbounded hypocrisy. Laughing stock. Rather than being the rather poor, economy car-driving fundies of my 70s youth, who didn’t even have a car, they’re now Cadillac fundies with stern guidance for anyone who’ll listen. Few do, but they have a Baptist Preacher to live up to who, as I said, is always cool. I don’t begrudge anyone their beliefs and in this particular case, the man is sincere enough that I only ever love to see him. He’s no poseur. His brothers, half in, are.

Pathetic. My uncles, whom I grew up loving — still loving, but not respecting, anymore — simply aren’t honest, in my view of things. Bible thumping is just, well, uneducated and ignorant. I can’t even spin it for the sake of family.

A couple of moths back, my dad, at the house of his brother: discussion escalated to where my dad was told he’s a…member of a cult. Drum roll, and que the IRONIC. …You know, his 40 pound weight loss, enhanced energy, better sleep, better looks, fat loos to increased leanness and likely a few other improvements you can name.

Well, if it is a cult….no, it’s just not. Never discount the propensity of morons to spout moron, especially if they they hide moron in their own closet.