Is the Raw Vegan Movement Getting Healthier and Healthier?

I’ve kinda backed off attacking the raw vegans lately. For one, there were a number of posts back in the spring pretty close together, many with over 300-400 comments each, and with that kind of enthusiasm for a single topic, I just didn’t want to overly exploit it — having the blog turn essentially into a failed vegan help blog.

And then there was the live debate with Harley Johnstone — aka “Durianrider” — of the 30 Bananas a Day (30BAD) website and forum (posts here and here, with 327 and 452 comments, respectively). With all that activity and comments and debates and on and on, I grew a bit fatigued with the whole thing.

In the interim, I kept hearing bits and snippets in various places around the Paleosphere that ‘it’s pointless to argue with the vegan Religion,’ does no good, waste of time, et cetera, et cetera. “I never waste my time” was oft heard. In point of fact, I don’t believe that and have never believed it; for this religion or any other, or any unfounded belief or any other. In fact, questioning belief systems from diet to health to social systems, politics, religion and on and on is the way humans, cultures, societies evolve and get marginally better over time. The key is patience, tenacity, and intellectual honesty with respect to your own ideas and beliefs. All knowledge or, “belief systems,” have holes. Most have far more holes than the few. The paleo paradigm broadly envisioned — equator to arctic circle and sea level to 16,000 feet and everything in-between — is one of the few that has fewer holes than the very, very many, i.e., all the other “fad diets.” This is simply a priori: it’s based upon the best science of evolution and anthropology we know. But it should never be dogma and there ought never be a single dietary prescription for all human individuals. We still have much to learn and will continue to have much to learn for a very long time.

…Or call it whatever you want, but to return to the point of the pointlessness in taking on The Vegan Manace, I have never seen the value in advancing any set of ideas like “paleo,” without also contrasting how they differ from competing ideas and when warranted (often), actually criticizing or attacking those competing ideas. And of course, I prefer ridicule because raw veganism for most people is simply ridiculous.

And so after deciding to back off, I got an email alerting me to a post and subsequent thread by a young man on the 30BAD forum lamenting how bad the raw fruit vegan diet had been for his body composition and athletic performance. That turned into perhaps the most popular “vegan menace” post I’ve ever done, with over 480 comments, 820 Facebook “Likes” and over 100 “Tweets.” …A 100% Raw Vegan Success Story. I suppose it was an oversight not to have put “Success” between quotation marks. 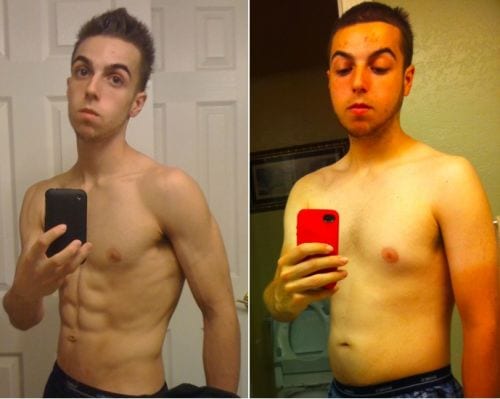 Before (left) and After (right)

I did catch a bit of flack from some commenters, emailers, and even the subject, Harout, himself, but only initially. Well, it is what it is.

And now, what it is is different than it was. I quote Tris from recent comments to that same post (here and here).

Hi guys. Quick intro: I’ve been pretty active on 30BAD for the past 18 months, and have been doing LFRV for 12 months now. It’s been great to see fat come off , more clarity of thought and I am enjoying the strength gains. It’s usually about this time that many people start falling off so I will see what happens.

I think durianrider has made a fool of himself trying to defend the cause at any cost. Obviously the differences in photos does not come down to flexing/not flexing, and that vague, distance flexing photo is not a “recovery” – both of which was durianrider’s main argument. But I’m glad Harout hasn’t fully recovered – considering the lifestyle he was living to create that body.

Let’s consider the actual 30BAD community, the people themselves. The entire premise of Richard’s post – that “not a single one of those motherfuckers is willing for one second to even entertain a whiff of a notion that something just may be rotten” – is pretty unfair.

Read the comments here and you get two themes: firstly, you can’t see any 30BADer showing concern about Harout’s bodyfat going up, and secondly: 30BAD is so tightly regulated and censored that no content challenging the “perfection” of a fruit diet remains on the forum.

Well… can you guys not put two and two together?

Any content on 30BAD that doesn’t praise fruit and veganism gets removed or at least totally chastised by one of durianrider’s aggressive tangents. So… most dialogue with Harout about this was behind the scenes. MANY 30BADers expressed concern for him and what he was doing.

Come on, give the 30BAD community at least a little credit… Look at the results of 95% of the thread – you don’t think the more experienced LFRVers would ask questions with cases like Harout and Kyndra? But these are done in PM’s, phone calls, emails and in-person because obviously durianrider has a tendency to hijack a thread when he has a cause.

Call 30BAD cultish and I would totally agree. If you want to question things, you do it on another forum.

Say that 30BAD’s message board… (totally under durianrider’s censorship control, largely under his social control) is an accurate reflection of the psyche of its’ 6,000 members, and I’ll tell you to think about this a little deeper.

Many 30BAD members (myself included) are often as embarrassed by durianrider as you guys are baffled. I like 70% of his advice and think the other 30% is really, really dodgy. It’s something we tolerate to meet people who eat the same way we do. […]

…I am grateful for the gracious, mature and constructive criticism you have given, based on what you have seen. The same goes for many comments from others here. It definitely helped me see the situation and the community with a more even light.

I know Richard your comments have helped many 30BADers look at the community in a more independent and critical way (and less like cult followers). This has encouraged a lot more personal confidence from members. You have done a great service.

The important point here is that I merely wrote a post that happened to resonate with folks, and they chipped in out of concern for a young man and together wrote almost 500 comments between them (as well as the likes & tweets). So while I’m grateful for Tris’ kind words toward me, the real credit goes to the community, who takes the time to read the blog, comment, and offer help.

And now here’s the punchline, a comment from Harout himself, just this morning.

Hello everyone. As Adriana requested, I’m going to post a progress report within the next couple of days. Been busy ’cause I’ve been back on the grind at both the weight room and basketball. Progress Is great and the fruit diet is history (stupidest diet I’ve ever done in my life). I’ll be around. Will post pictures soon and a written summary of how I feel as I shifted my diet.

Well whaddya know about that!?

Irrespective of what his diet actually is, what’s important is that he has shifted from a path of diminishment, to one of improvement. I’ll be anxious to see how he has turned things around for his own sake rather than continue down a path of self sacrifice in the name of a dietary ideology.

UPDATE: Harout has now posted his update with a video and pics as a comment on the original post. Go have a look. He looks good and strong again after dropping the raw fruit diet.