Part of what motivated my to review Paleo Comfort Foods earlier today in my last blog post is that I was cooking. I had something on the stove and I was waiting for it to get ready for further touch and attention.

Yes, but only if you get it right. Tonight, I’m virtually teaming up with Julie & Charles Mayfield, authors of the aforementioned cookbook, to show you how to get it right. When you get it right, it’s that moment where right before serving, you spoon up some broth from the pot, without a scintilla of veggie or meat matter and if, if your knees don’t immediately collapse — combined with wondering, even for the slightest micro of a second that perhaps there may just really be a God — then you have not done it right.

Right off the bat, you must either start from scratch and make your broth and chicken all in one, which takes a while, or you use your own saved chicken broth, or you use a quality product from a good market. I like Trader Joe’s Organic Free Range Chicken Stock because I don’t make a lot of homemade and it’s very tasty and not salty, which is a deal breaker for any stock.

For many years I have had a particular way to make chicken soup, which is that now and then, we’ll go to the good markets like Whole Foods or Lunardi’s in our area, and get a rotisserie chicken. We’ll eat the breast and the legs with a salad. The rest of that carcass, bone and all, goes into the pot on boil, along with the aforementioned stock (no water; you want richness). 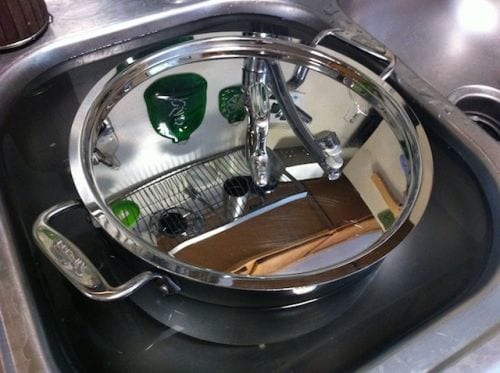 Because it’s pre cooked and you’re using stock, you don’t need to boil for hours. I bring it to a boil and then simmer covered for an hour or so. But then you need to go to work to strip meat from bone, so here’s a good trick. Stop your sink, put the whole pot in, and fill it with cold water. After five minutes, drain and repeat and within a few minutes more, you’re working. If you have a good steam pot, that works well to separate and drain. 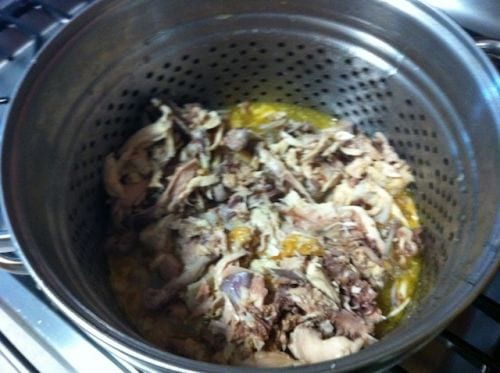 So up to now, I have made a very simple chicken soup: onion and a secret ingredient I’ll get to later. But owing to the book, I did a few additional things and came out with an overall improvement. That’s the theme, here.

I like simple, rich broth-chicken soup. Fuck thickening with wheat flour or starch. You don’t need rice, and you should not be feeding your poor kids noodles. Chicken Noodle? How about good, orgasmic chicken soup?

How about that? Where did fucking noodles come from, anyway? Do chickens like noodles? Is that it? What, is it? I dunno. But just forget about it.

So now we get to the paper thin part. As I said, I like light brothy soups with chicken and another thing or two. Up to now, I have always sliced yellow or white onion paper thin. I like to use an 8″ sharp Japanese utility knife for this. Then, I get green onion and I use the part from about 1/2″ from the root to 2″ up and slice paper thin. Owing to the cookbook, I did a few other things. First, I added some garlic, but because it was already in the pot, I just used a bit of powder. Celery. That will go so good with the onion. Again, paper thin slices.

Alright, so here’s the secret ingredient that just gives the whole thing a character that will make you question your atheism: lemon. Yes, lemon, but again, paper thin. And here’s the deal: the whole lemon, rind and all. Yep, just take your whole lemon, lop off the first bit, and begin slicing it so thin you can see through it. 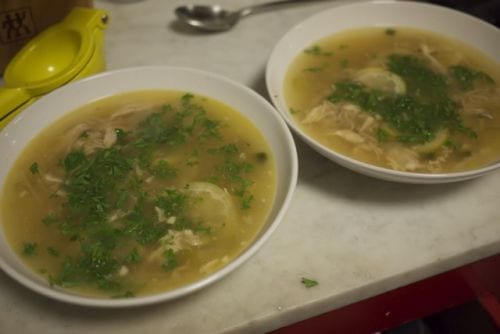 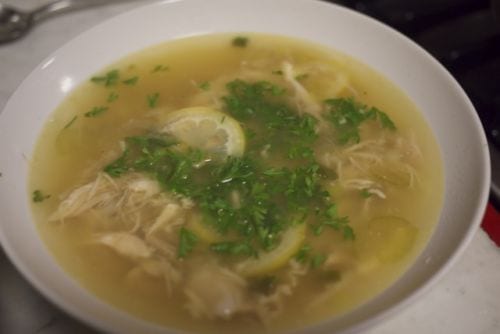 Because everything is sliced so thin, it’s only a light simmer for a short time and yes, you eat the lemon rind along with everything else.

You can’t help yourself.

Oh, for the last touch from Julie and Charles, I added parsley. This, I chose to chop and add fresh.

The point is, there are a bunch of ways to do any recipe, or use theirs to enhance your own. You’re talking about real food that’s not overly processed, and so your options are limitless. This is a cookbook, but also a reference.